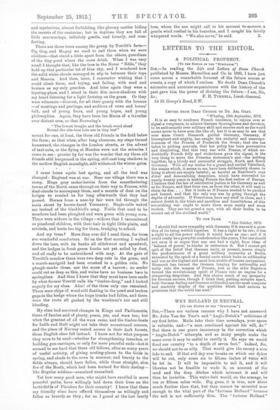 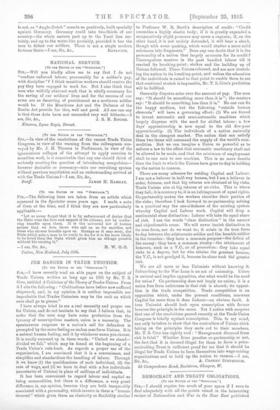 WHY HOLLAND IS NEUTRAL.

[TO THE EDITOR or THE "..SPECTATOR"] S111,—There are various reasons why I have not answered Mr. John Van der Veer's and "Anglo-Dutch's" criticisms of my first letter. Mails take their time nowadays, your space is valuable, and—" a man convinced against his will, &c." But there is one grave inaccuracy in the correction which " Anglo-Dutch " attempts, and as many people make the same error it may be useful to rectify it. He says we would flood our country "to a depth of seven feet." Indeed, Sir, we should not be so silly. That would give the enemy a nice lake to sail. If that evil day ever breaks on which our dykes will be cut, only some six to fifteen inches of water will be let in. It will be impossible to sail it, and it will likewise not be feasible to wade it, on account of the mud and the deep ditches which intersect it and will then be invisible. This water-belt would, on the average, be ten or fifteen miles wide. Big guns, it is true, now shoot much further than that, but they cannot be mounted near enough to the vital part of the "fortress Holland" became, the soil is not sufficiently firm. The " fortress Holland "

is not, as " Anglo-Dutch" asserts so positively, built specially against Germany. Germany could take two-thirds of our country—the whole eastern part up to the Yssel line cer- tainly, and up to the water-line probably, provided it has the men to defeat our soldiers, There is not a single modern fortress there.—I am, Sir, &c., BITAVIER.