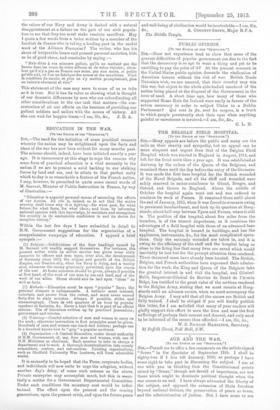 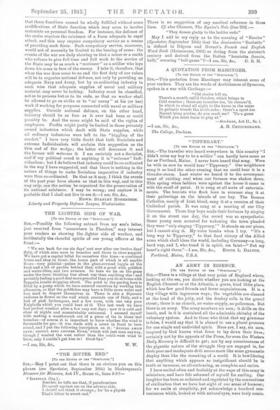 AGE AND THE WAR.

[To TUR EDITOR OP Tea " SPROTATOR."1 Slit,—Permit me to offer a few comments on the article signed "Senex " in the Spectator of September 11th. I shall be eighty-two if I live till January, 1916, so perhaps I have some right to take part in discussing the subject. I am at one with • you in thinking that the Constitutional points raised by "Senor," though not devoid of importance, are not those which ought to dominate political thought when the war oomes to an end. I have always advocated the liberty of the subject, and opposed the extension of State function beyond national defence, the preservation of peace at home, and the administration of justice. But I have come to see that these functions cannot be wholly fulfilled without some modifications of State function which may seem to involve restraints on personal freedom. For instance, the defence of the realm requires the existence of a force adequate to repel attack, and this may require compulsory service as a means of providing such force. Such compulsory service, moreover, would not of necessity be limited to the bearing of arms : the events of the war are daily showing us that a miner or a smith who refuses to give full time and full work to the service of the State may be as much a " mutineer " as a soldier who lays down his arms in face of the enemy. I take it, therefore, that when the war does come to an end the first duty of our rulers will ho to organize national defence, not only by providing an adequate Navy and Army, but by co-ordinating industry in such wise that adequate supplies of naval and military material may never be lacking. Industry must be classified, not as to persons but as to its ends, so that no worker shall be allowed to go on strike or to "on' canny" at his (or her) work if working for purposes connected with naval or military supplies. Outside national defence, on the other hand, industry should be as free as it ever had been or could possibly be. And the same might be said of the rights of employers. Profits might justly be limited in those privately owned industries which dealt with State supplies, while all ordinary industries were left to the "higgling of the market." I have very little doubt that both Socialists and extreme Individualists will acclaim this suggestion as the thin end of the wedge ; the latter will denounce it and the former will welcome it. I am certainly not a Socialist, and if my political creed is anything it is "extreme" Indi- vidualism ; but I do believe that industry could be co-ordinated in the way I have suggested, and that there is nothing in the nature of things to make Socialism imperative if industry were thus co-ordinated. Be that as it may, I think the events of the past year have shown us that in this way, and in this way only, can the nation be organized for the preservation of its national existence. I may he wrong; and anyhow it is probable that I shall not live to see it.—I am, Sir, &I,