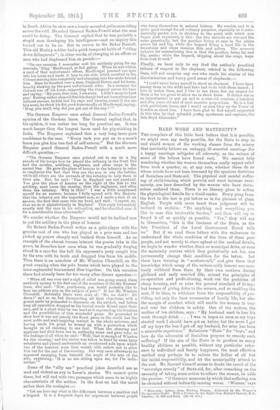 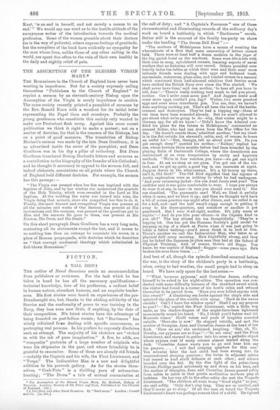 THE compilers of this little book believe that it is possible, we might even say easily possible, for the State to step in and shield women of the working classes from the misery that inevitably follows an unhappy, ill-assorted marriage (for a happy marriage mitigates all adversity, as the writers of

some of the letters have found out). We cannot help wondering whether the women themselves really expect relief from such a quarter, or, at any rate, whether those do so whose minds have not been bemused by the specious doctrines of Socialism and State-aid. The physical and mental suffer- ing of child-bearing, which poverty and want increase enor- mously, are here described by the women who have them- selves endured them. There is no literary gloss to soften the physiological details for a timid reader. Every pang from the first to the last is put before us in the plainest of plain English. People with more heart than judgment will be inclined to exclaim : "Do anything and everything you like to ease this intolerable burden," and then will try to forget it all as quickly as possible. "For," they will say to themselves, "this is the business of the State, as the late President of the Local Government Board tells us." But if we read those letters with the endeavour to understand the whole condition of the lives of these poor people, and not merely to stare aghast at the medical details, we begin to wonder whether State or municipal doles, or even the maternity centres which they pathetically ask for, can permanently change their condition for the better. Let them have training in " mothereraft," and give them that knowledge which many of the writers sadly lament was care- lessly withheld from them by their own mothers during girlhood and early married life; extend the principles of co-operation and profit-sharing, work out the problems of cheap housing, and so raise the general standard of ; but beware of giving doles to the woman, and so enabling the man, if he likes, to withdraw from the responsibility of pro- viding, not only the bare necessaries of family life, but also the margin of comfort which will enable the woman to bear and rear her children in safety. One of the writers, the mother of ten children, says : "My husband used to lose his work through drink. . . . I was in hopes as soon as my boys started work I should have got on better, but the more I got off my boys the less I got off my husband, for mine has been a miserable experience." Substitute "State " for "boys," and how do the advocates of Socialism propose to remedy such suffering P If the aim of the State is to produce as many healthy children as possible, without any particular refer- ence to individual and family happiness, the most effective method may perhaps be to relieve the father of all but the initial responsibility, and let the municipality attend to the rest. Mr. Samuel 'himself scents to doubt the result of the "sovereign remedy" of State-aid, for, after remarking on the necessity of taking some action to relieve the women, he adds the proviso : " if there are measures by which that suffering can be obviated without indirectly causing worse. Woman,' says

Kant, is an end in herself, and not merely a means to an end.' " We would say one word as to the hostile attitude of the anonymous writer of the introduction towards the medical profession. Some of the women grumble about their doctors (as is the way of patients), others express feelings of gratitude, but the compilers of the book have evidently no sympathy for the men whose lives, unlike those of any other calling in the world, are spent (too often to the ruin of their own health) in the daily and nightly relief of pain.