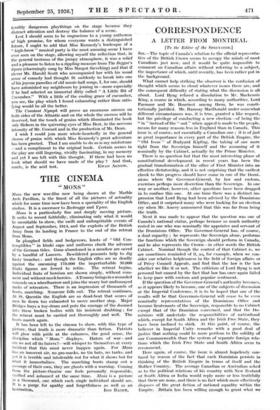 Mons the new war7filrn now being shown at the Marble Arch Pavilion, is the finest of all the pictures of actuality which for some time now have been a speciality of the English studios. It is a successor to Zeebrugge and Ypres.

Mons is a particularly fine and deeply moving picture. It seeks to record faithfully, eliminating only what it would be unsuitable to show, the swift and unforgettable events of August and September, 1914, and the exploits of the British Army from its landing in France to the end of the retreat from Mons.

In ploughed fields and hedgerows, knots of "Old Con- temptibles " in khaki caps and uniforms check the advance of the German tides. Guns abandoned in a meadow are saved by a handful of Lancers. Bewildered peasants help to dig hasty trenches : and though the English rifles are so deadly against the oncoming 170,000 the imperturbable 50,000 khaki figures are forced to retire. The retreat begins. Individual feats of heroism are shown simply, without coin- meat and without mock heroics. A Tommy brings in a wounded comrade on a wheelbarrow and joins the weary but undismayed ranks of retreaters. There is an impression of thousands of boots, marching. Someone falls out. The retreat continues. At St. Quentin the English are so dead-beat that scores of men lie down too exhausted to move another step. Major Bridges buys a toy-drum and puts the courage of the doomed into these broken bodies with his insistent drubbing ; for the retreat must be carried out thoroughly and well. The boots march again.

It has been left to the cinema to show, with this type of Picture, that truth is more dramatic than fiction. Patriots Will glow with pride at the calmness, the good sense, the discipline which " Mom " displays. Haters of war—and are we not all its haters?—will whisper.to themselves at every incident that this must never happen again. For Mons has an innocent air, no gas-masks, no tin hats, no tanks, and yet it is terrible and intolerable not for what it shows but for What it immortalizes. The marching boots stamp out a message of their own, they are ghosts with a warning. Coming front the picture-theatre one feels personally responsible, exalted and ashamed at the same time. Mons is a picture in a thousand, one which each single individual should see. It is a purge for apathy and forgetfulness as well as an