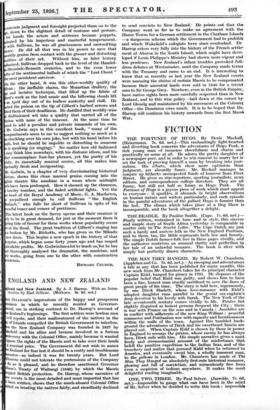 PD JEtricoz's impressions of the happy and prosperous minion in which he recently resided as Governor- neral, are in striking contrast to Dr. Harrop's account of w Zealand's beginnings. The first settlers were lawless men evil repute, and their maltreatment of the natives in the y of Islands compelled the British Government to interfere. en the New Zealand Company was founded in 1837 by akefield and his allies and became involved in a furious

troversy with the Colonial Office, mainly because it wanted Ignore the rights of the Maoris and to take over their lands a nominal price. The Government did not wish to annex W Zealand for fear lest it should be a costly and troublesome \session—as indeed it was for twenty years. But Lord Ihourne could not tolerate the pretensions of the Company do as it pleased, and he therefore sanctioned Governor ikon's Treaty of Waitangi (1840) by which the Maoris eePted British protection. Dr. Harrop, whose narrative of SC events is the most detailed and most impartial that has t been written, shows that the much-abused Colonial Office sted on treating the natives fairly, and steadfastly declined

to send convicts to New Zealand. He points -out that the • Company went so far as to make an agreement with the Hanse Towns for a German settlement in the Chatham Islands dangerous scheme which the Government had to prohibit and which Wakefield's eulogists have since overlooked. Dr Harrop enters very fully into the history of the French settle- ment at Alcaroa in the South Island, which might have deve- loped if Louis Philippe's Ministry had shown more +vigour and less prudence. New Zealand's infant troubles provoked full, dress debates at Westminster, until the Company made terms with the Treasury and came to an end. It is interesting to know that as recently as last year the New Zealand courts were assessing the claims of certain Maoris to be compensated because their ancestral lands were sold in 1848 for a trivial sum to Sir George Grey. Nowhere, even in the British Empire, have native rights been more carefully respected than in New Zealand, and to this wise policy—laid down at the outset by Lord Glenelg and maintained by his successors at the Colonial Office—the Dominion owes much. It is to be hoped that Dr. Harrop will continue his history onwards from the first Maort War.