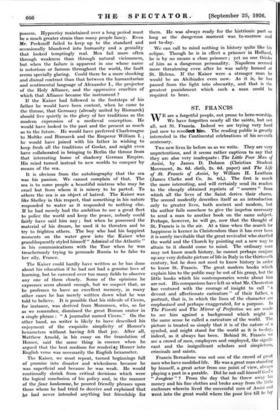 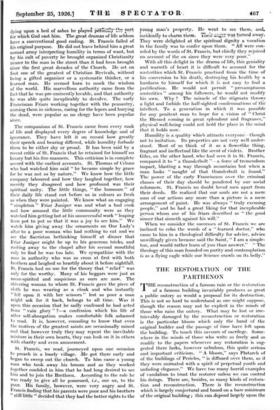 WE are a forgetful people, not prone to hero-worship. We have forgotten nearly all the saints, but not all, not St. Francis. Indeed we are trying very hard just now to recollect him. The reading public is greatly interested in the Continental celebrations of his seventh centenary.

Two new lives lie before us as we write. They are very unpretentious, and it seems rather captious to say that they are also very inadequate: The Little Poor Man of Assisi, by James D. Dobson (Christian Student Movement, 3s. 6d. cloth, 2s. 6d. paper) and The Life of St. Francis of Assisi, by William H. Leatham (James Clarke and Co. 3s. 6d.). The first is much the more interesting, and will certainly send its readers to the cheaply obtained reprints of " sources " from which all the lives of the Saint derive their charm. The second modestly describes itself as an introduction only to greater lives, both ancient and modern, but the author fails somehow to give the impetus necessary to send a man to another book on the same subject. Perhaps, however, he will go, now that the thought of St. Francis is in the air. At a time when the search for happiness is keener in Christendom than it has ever been it is surely inevitable that the great revivalist who startled the world and the Church by pointing out a new way to attain to it should come to mind. The ordinary man may not know much history, he cannot perhaps conjure up any very definite picture of life in Italy in the thirteenth century, but he does not need to know history in order to know St. Francis. The great modern books which explain him to the public may be out of his grasp, but the little books which his contemporaries wrote about him are not. His companions have left us what Mr. Chesterton has ventured with the courage of insight to call "a devout and affectionate caricature" of their father, a portrait, that is, in which the lines of the character are emphasized and perhaps exaggerated, for a purpose. In The Fioretti and The Mirror of Perfection we are made to see him against a background which might in the same sense be called a caricature of the world. The picture is treated so simply that it is of the nature of a symbol, and might stand for the world as it is to-day, indeed, as it always has been. Behind St. Francis we see a crowd of men, employers and employed, the signifi- cant and the insignificant scholars and simpletons, criminals and saints.

Francis Bernadone was not one of the crowd of great .men who have modified life. He was a great man standing by himself, a great actor from one point of view, always playing a part in a parable. Did he not call himself God's " Jangleur" ? From the day that he threw away his money and his fine clothes and broke away from the little enclosure wherein lived the successful men of .Assisi and went into the great world where the poor live till he lay dying upon a bed of ashes he playea -Perrile=7" t1-11: for which God cast him. The great dramas of life seldom have a conventional good ending. St. Francis failed of his original purpose. He did not leave behind him a great nomad army interpreting humility in terms of want, but by his cult of poverty he brought organized Christianity nearer to the man in the street than it had been brought since the first great decades of the Church. He set on foot one of the greatest of Christian Revivals, without being a gifted organizer or a systematic thinker, or a learned man. He seemed born to mock the wisdom of the world. His marvellous authority came from the fact that he was pre-eminently lovable, and that authority he was able quite inexplicably to devolve. The early Franciscan Friars working together with the peasantry, nursing them in sickness, caring for the lepers and burying the dead, were popular as no clergy have been popular since.

The companions of St. Francis came from every rank of life and displayed every degree of knowledge and of ignorance. They have left it on record how greatly their speech and bearing differed, while humility forbade them to be either shy or proud. It has been said by a recent critic of St. Francis that he retained for himself no luxury but his fine manners. This criticism is in complete accord with the earliest accounts. St. Thomas of Celan° who had watched him said "he -became simple by grace for he was not so by nature." We know how the little company laboured and how they laughed together, how merrily they disagreed and how profound was their spiritual unity. The little things, "the humours" ' of their daily life stand out before us in colours as fresh as when they were painted. We knOw what an engaging " simpleton " Friar Juniper was and what a bad cook and how amused the little community were as they watched him getting hot at his unsuccessful work" leaping from pot to pot so that it was a joy to see him." We watch him giving away the ornaments on Our Lady's altar to a poor woman who had nothing to eat and we see the Sacristan bethinking himself at dinner that Friar Juniper might be up to his generous tricks, and rushing away to the chapel after his second mouthful only to find he was too late. We sympathize with the man in authority who was so cross at first with both brothers and laughed so heartily about it before nightfall. St. Francis had no use for the theory that " relief " was only for the worthy. Many of his beggars were just as mean-spirited and suspicious as ours are now. The shivering woman to whom St. Francis gave the piece of cloth he was wearing as a cloak and who instantly "fell upon it with her scissors" lest so poor a man might ask for it back, belongs to all time. Was it Upon this occasion that he sadly confessed he had acted from "vain glory" ?—a confession which his life of utter self-abnegation makes comfortable folk ashamed to read. It is, however, consoling to know that even the motives of the greatest saints are oce.asionally mixed and that however truly they may repent the inevitable mixture in their own hearts, they can look on it in others with charity and even amusement.

St. Francis, we read, journeyed upon one occasion to preach in a lonely village. -He got there early and began to sweep out the church. To him came a young man who took away his broom and as they worked together confided in him that he had long desired to see him and to join the Brethren. According to the rule he was ready to give all he possessed, i.e., one ox, to the• poor. His family, however, were very angry and St. Francis finding that his parents were poor and his brothers " still little" decided that they had the better rights to the young man's property. He went to see them, and. , incidently to charm them. a-.4,-er wits timed away.

They were delighted at the spiritual dignity a vocation in the family was to confer upon them. "All were con- soled by the words of St. Francis, but chiefly they rejoiced on account of the ox since they were very poor."

With all this delight in the drama of life, this geniality and warmth of heart it is difficult to account for the austerities which St. Francis practised from the time of his conversion to his death, destroying his health by a hardness to himself for which it is not easy to find a justification. He would not permit "presumptuous austerities" among his followers, he would not modify his own. Why ? The miracle of the stigmata throws a light and forbids the half-sighted condemnations of the intellect. To a generation in which it was possible for any penitent man to hope for a vision of "Christ the Blessed coming in great splendour and fragrance," physical well-being could not hold the place in the mind that it holds now.

Humility is a quality which attracts everyone—though trot to imitation. Its properties are not very well under- stood. Most of us think of it as a flowerlike thing, fragrant and ineffectual like the scent of violets. Brother Giles, on the other hand, who- had seen it in St. Francis, compared it to "a thunderbolt "—a force of tremendous impact, blasting a way through mountains but when a -man looks "naught' of that thunderbolt is found." The power of the early Franciscans over• the criminal classes of their day should be pondered by our social Teformers. St. Francis no doubt loved men apart from their deeds. He realized that our souls are not a mere sum of our actions any more than a picture is a mere arrangement of paint. He was always "truly excusing people," and he had a great liking for that inexplicable -person whom one of his friars described as "the good -sinner that sinneth against his will."

- When we consider the successes of St. Francis we are -inclined to echo the words of a "learned doctor," who • came to him in a theological difficulty for advice, advice unwillingly given because said the Saint, "I am a simple- ton, and would rather learn of you than answer." " The theology of this man founded on purity and contemplation is as a flying eagle while our Science crawls on its belly."