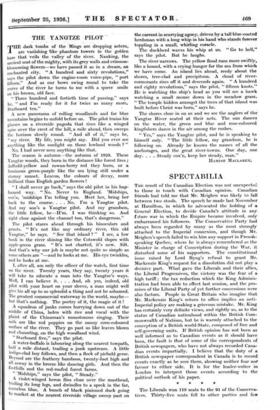 THE YANGTZE -PILOT T HE dark tombs of the Mings are

dropping astern, are vanishing tike phantom towers in the golden haze that veils the valley of the river. Nanking, the ancient seat of the mighty, with its grey walls and crimson blossoming flowers—we have passed it as in a dream, an enchanted city. "A hundred and sixty revolutions," says the pilot down the engine-room voice-pipe, "port fifteen." And as our bows swing round to take the curve of the river he turns to me with a queer smile on his brown, old face.

"Three hundred and fortieth time of passing," says he, "and I'm ready for it for twice as many more. Starboard ten."

A new panorama of rolling woodlands and far blue mountains begins to unfold before us. The pilot trains his glasses on a riverside pagoda that rises like a winged spire over the crest of the hill, a mile ahead, then sweeps the horizon slowly round. "And all of it," says he, "my river. My life, you might say. Did you ever see anything like the sunlight on those lowland woods ? "

The season is autumn—the autumn of 1928. These Yangtze woods, they bum in the distance like forest fires ; daffodil-yellow and rowan-berry red they burn, or a luminous green-purple like the sea lying still under a stormy sunset. Leaves, the colours of decay, more brilliant than English garden flowers !

"I shall never go back," says the old pilot in his hap- hazard way. "No. Never to England. 'Midships, cox'n, 'midships I'm telling you. Meet her, bring her back to the course. . . . No. I'm a Yangtze pilot. And my son's a Yangtze pilot. And my grandson, the little fellow, he—H'm. I was thinking so. And right close against the channel too, that's dangerous."

The pilot stares ahead through his binoculars and grunts. "It's not like any ordinary river, this old Yangtze," he says. "See that island ? " I see, a low bank in the river shining like the Cotswold slopes with apple-green gras. "It's not charted, it's new. Silt. And that's why our job is maybe not quite so simple as some others are "—and he looks at me. His eye twinkles, and he looks at me.

I, after all, am only the officer of the watch, first time on the river. Twenty years, they say, twenty years it will take to educate a man into the Yangtze's ways. Well, I can believe it. . . . And, oh yes, indeed, old Pilot with your heart on your sleeve, a man might well give his all up to so splendid a thing and not be ashamed. The greatest commercial waterway in the world, maybe— but that's nothing. The poetry of it, the magic of it !

A squadron of junks comes hurrying down out of the middle of China, laden with rice and vocal with the plaint of the Chinaman's monotonous singing. Their sails are like red poppies on the sunny corn-coloured surface of the river. They go past us like leaves blown and chaunting, on the high woodland wind. "Starboard five," says the pilot. A water-buffalo is labouring along the nearest towpath, half a mile distant, trailing a junk upstream. A little indigo-clad boy follows, and then a flock of piebald geese. Beyond are the feathery bamboos, twenty-foot high and all asway in the breeze like dancing girls. And then the foothills and the red-roofed forest farms.

"Midships," says the pilot, "Steady." trailing A violet-winged heron flies close over the masthead, its long legs, and dwindles to a speck in the far, nameless blue. A bunch of black pinioned duck going to market at the nearest riverside village sweep past on the current in scurrying agony, driven by a tall blue-coated herdsman with a long whip in his hand who stands forever toppling in a small, whirling- coracle.

The duckherd waves his whip at us. "Go to hell," says the pilot. But he laughs.

The river narrows. The yellow flood runs more swiftly, like a hound, with a crying hunger for the sea from which we have come. An island lies ahead, reedy about the shores, tree-clad and precipitous. A cloud of river- cormorants rises off it and descends again. "A hundred and eighty revolutions," says the pilot, "fifteen knots." He is watching the ship's head as you will see a hawk watching a small mouse down in the meadow grass. "The temple hidden amongst the trees of that island was built before Christ was born," says he.

The shores close in on us and we see the anglers of the Yangtze River seated at their nets. The sun dances on the water, the green and blue and rose-coloured kingfishers dance in the air among the rushes.

"Yes," says the Yangtze pilot, and he is speaking to himself only. "The little fellow, my grandson, he is following on. Already he knows the names of all the anchorages, and the great river-towns. One day, one day. . . . Steady cox'n, keep her steady, man."