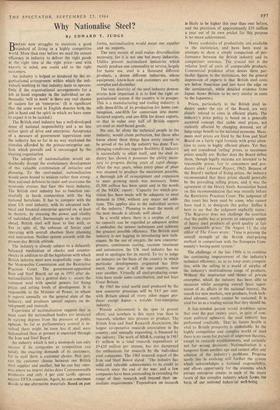 -ED MAIN now struggles to maintain a good Jastandard of living in a highly competitive world. More than ever before we need the utmost efficiency in industry to deliver the right goods at the right time at the right price—and with exports in mind, one could add to the right customers.

An industry is helped or hindered by the or- ganisational, arrangement within which the indi- viduals working in that industry have to operate. Only if the organisational arrangements for a job in hand engender in the individual an en- thusiastic 'will to work° is there any real chance of success for an 'enterprise.' (It is significant that the same word in English denotes both the job in hand and the spirit in which we have come to expect it to be tackled.)

The British steel industry has a well-developed sense of national responsibility and a no less active spirit of drive and enterprise. Acceptance of a measure of government supervision over the industry has so far in no way weakened the stimulus afforded by the private-enterprise out- look which prevails and is encouraged by the existing organisation.

The adoption of nationalisation would un- doubtedly disrupt the evolutionary development of this valuable combination of initiative and planning. To the steel-maker, nationalisation would seem bound to weaken rather than streng- then national defences to resist and overcome the economic stresses that face this basic industry. The British steel industry has to function suc- cessfully in harsh competition with the big national battalions. It has to compete with the giant US steel industry, with its advanced tech- nical and financial enterprise spurred on, at least in rhetoric, by stressing the power and vitality of individual effort. Increasingly so in the years ahead, British steel will have to live with, or live in spite of, the colossus of Soviet steel operating with overall absolute State planning and instruction. Neither system accords with the present-day British attitude.

The industry is already subject to a delicately balanced mechanism of checks and counter- checks in addition to all the legislation with which British industry must now respectfully cope—like the Monopolies Commission and the Restrictive Practices Court. The government-appointed Iron and Steel Board, set up in 1953 after de- nationalisation, has a general duty to secure the common weal with special powers for fixing prices and setting levels of development. It is responsible to the Minister of Power, to whom it reports annually on the general state of the industry, and produces special reports on de- velopmerit and research.

Experience of nationalisation suggests that in most cases the nationalised bodies are insulated in varying degrees from the pressure of public opinion. So far as parliamentary control is in- volved there might be even less if steel were nationalised than at present is exercised through the Iron and Steel Board.

An industry which is not a monopoly can only survive if its companies in competition can satisfy the exacting demands of its customers, for in steel there is customer choice. Not only can the customer choose between one British steel supplier and another, but he can buy over- seas where no import duties deter Commonwealth producers and only 4 per cent tariffs operate against EFTA countries. Again, he.can sometimes decide to use alternative materials. Based on past

forms, nationalisation would mean one supplier and no imports.

The very nature of steel makes diversification necessary, for it is not one but many industries. Unlike present nationalised industries which mainly produce one commodity or service, largely for home use, steel is a thousand different products, a dozen different industries, whose equipment, know-how and customers are vastly complex and dissimilar.

The very diversity of the steel industry demon- strates how important it is to find the right or- ganisational system if the country is to prosper. This is a manufacturing and trading industry; it sells three-fifths of its production for home con- sumption, one-fifth for conversion into manu- factured exports, and one-fifth for direct exports, so that in value over half all British exports are steel or steel-based goods.

No one, let alone the technical people in the industry, would claim perfection, but those who know about these things have every reason to, be proud of the job the industry has done. Fast- changing conditions require flexibility if industry is successfully to adapt itself, and the steel in- dustry has shown it possesses the ability neces- sary to progress during years of rapid change. After the war years, when every piece of plant was strained to produce the maximum possible, a thorough job of re-equipment and expansion to meet growing needs was necessary. Some £1,500 million has been spent and in the words of the NEDC report ; 'Capacity for which pro- vision has, been made will be adequate to meet demand in 1966, without any major net addi- tions. This applies also to the individual sectors of the industry.' Planning to meet the needs of the next decade is already well ahead.

In a world where there is a surplus of steel no capacity can be regarded as adequate unless it embodies the newest techniques and achieves the greatest possible efficiency. The British steel industry is not lagging in introducing new tech- niques. In the use of oxygen, the new converter process, continuous casting, vacuum treatment and automation, the UK steel industry has no need to apologise -for its record. To try to judge an industry on the basis of the country in which particular developments originated has little merit. One year it will be one country, next year another. Virtually all steel-producing coun- tries have made some contribution, and not least Great Britain.

By 1965 the total world steel produced by the new converter processes will be 14.5 per cent, with Britain ahead of every other major pro- ducer except Japan--a notable free-enterprise industry.

Present achievement is the spur to greater effort; and nowhere is this more true than in research, whether into process or product. The British Iron and Steel Research Association, the largest co-operative research association in the country, and annually expanding, is financed by the industry. The work of BISRA, costing in 1963 £1 million in a total research expenditure of £9-£10 million per annum, has not dampened the enthusiasm for research by the individual steel companies. The 1963 research report of the Iron and Steel Board stated: 'The industry has solid and valuable achievements to its credit in research since the end of the war; and a few companies have been outstanding in extending the range of their research well beyond their im- mediate requirements.' Expenditure on research is likely to be higher this year than ever before, and the provision of approximately £10 million a year out of its own pocket for this purpose is no mean achievement.

Many yardsticks of productivity are available to the statistician, and have been used in attempts to show a simple comparison of per- formance between the British industry and its competitors overseas. The crucial test is the relative level of costs of comparable products. Commercial prudence often denies these par- ticular figures to the statistician, but the general impression of experts is that British steel costs are below American and just have the edge on the continentals, while detailed evidence from Japan shows Britain to be very similar in costs to the Japanese.fr.

Prices, particularly in the British' steel in- dustry under the eye of the Board, are very closely related to costs in efficient plants. The industry's price policy is based on a generally accepted concept that stable steel prices, not violently affected by changing demand, are of long-range benefit to the national economy. Maxi- mum steel prices are fixed by the Iron and Steel Board on a fairly rigid formula with great atten- tion to costs in highly efficient plants. Yet they are not considered 'ceiling' prices, as maximum prices usually are. Rather does the Board define them, 'though legally maxima are intended to be reasonable prices, fair to consumers and pro- ducers alike' (Annual Report, 1962). Because of the Board's method of fixing prices, the industry recommended that these prices should generally be the prevailing selling prices, and it was the agreement of the Heavy Steels Association based on this recommendation that was recently before the Restrictive Practices Court. The judgment of this court has been used by some, who cannot have read it, to denigrate this policy. Suffice it here to say that the judgment explicitly states: The Registrar does not challenge the assertion that the public has at present an adequate supply of heavy steel products of good quality at fair and reasonable prices.' On August 13, the city editor of The Times wrote: 'Time is proving the overall strength of the British steel-pricing method in comparison with the European Com- munity's basing-point system.'

The challenge of the late 1960s is to combine the continuing improvement of the industry's technical efficiency, so as to keep costs competi- tive, with the selling in a world of surplus of the industry's multitudinous range of products. Without the inspiration and thrust of private enterprise, which the industry has been able to maintain whilst accepting overall State super- vision of its affairs in the national interest, the search for new markets, new products, fresh tech- nical advance, surely cannot be sustained. It is vital for us as a trading nation that they should be.

A fair-minded person would doubtless agree that over the past twenty years, in spite of con- stant political upheaval, the steel industry has performed creditably. That its future health is vital to British prosperity is undeniable. In the highly competitive and complex world of steel there is no room for pursuit of unproven theories, except in research establishments, and certainly not for wrong decisions. Nationalisation is a hangover from another age and cannot offer any solution of the industry's problems. Progress surely lies in evolving still further the system which acknowledges a national responsibility, and allows opportunity for the stimulus which private enterprise creates in each of the many facets of this complex industry which forms the basis of our national industrial well-being.