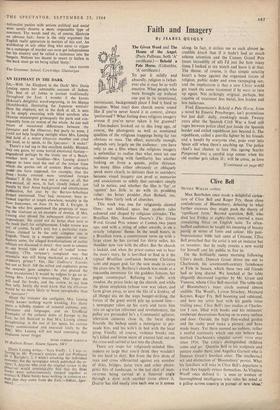 By ISABEL QUIGLY The Given Word and The House of the Angel. (Paris Pullman, both 'A' certificate.) — Behold a Pale Horse. (Columbia, 'A' certificate.) Film-makers hooked on to this long ago, of course, the photogenic as well as emotional qualities of the religious trappings being far too obvious to miss. The effect, naturally enough, depends very largely on the audience: you have only to see a film where the religious imagery is unfamiliar to realise that what must 'set one audience tingling with familiarity has another looking on from a quaint, polite distance. So many films either obviously or obliquely speak more clearly to initiates than to outsiders; because visual imagery can prod at memories and associations so subtly that outsiders simply fail to notice, and whether the film is 'for' or 'against' has little to do with its prodding value: no better prodder than Bufluel, say, whose films fairly reek of churches.

This week was one for religiously slanted films: not biblical epics but modern tales coloured and shaped by religious attitudes. The Brazilian film, Ansolmo Duarte's ,The Given Word, Grand Prix winner at Cannes two years ago, and with a string of other awards, is on a strictly 'religious' theme. In the small hours, in a Brazilian town, a countryman turns up with a large cross he has, carried for thirty miles, his shoulder now raw with the effort. But the church is locked, and when the priest comes out to hear the man's story, he is horrified to find in it the typical' Brazilian confusion between Christian saint and pagan god, for the vow made to carry the cross into St. Barbara's church was made at a macumba ceremony for the goddess Jansam, her pagan counterpart. Refusing to traffic with voodoo, the priest locks up the church, and while the pious simpleton (whose vow was taken, and farm given away, to save the life of a donkey, of all things) sits on the steps hunger-striking, the forces of the great world pile up around him— a newspaper takes up his story and turns him into an agrarian reformer and revolutionary, the police are persuaded he's a Communist agitator, television cameras close in, the local shops flourish, the bishop sends a monsignor to per- suade him, and his wife's in bed with the local pimp. Finally, of course, violence breaks out, he's killed and (even more of course) laid out on the cross and carried at last into the church.

There are traps for religiously-minded film- makers so large that you'd think they wouldn't be too hard to skirt. But from the first shots of man and cross silhouetted against any number of skies, bridges, palm trees and other photo- genic bits of landscape, to the last shot of man- on-cross being carried at a funereal angle through a door with another cross above it, Duarte has slid neatly into each one as it comes along. In fact, it strikes me as such almost in- credible kitsch that if it hadn't had so much solemn attention and the Cannes Grand Prix (most incredibly of all) I'd just list how many times I looked at my watch and leave it at that. The theme, of course, is that simple sanctity hasn't a hope against the organised forces of religion, public order and even rampaging sex; and the implication is that a new Christ would get much the same treatment if he were to turn up again. Net strikingly original, perhaps, but capable of treatment less banal, less leaden and less ludicrous.

Fred Zinnemann's Behold a Pale Horse, from a novel by Emeric Pressburger, isn't pretentious but just dull: dully, creakingly made. Twenty years after the Spanish Civil War a feud still rages between police chief just inside the Spanish border and exiled republican just beyond it. The republican, called a guerilla fighter by his friends and a bandit by everyone else, pops over into Spain still when there's anything up. The police chief's last chance to lure this ageing Scarlet Pimpernel into a careful trap comes when his old mother gets taken ill : will he come, as love [Continued on page 402