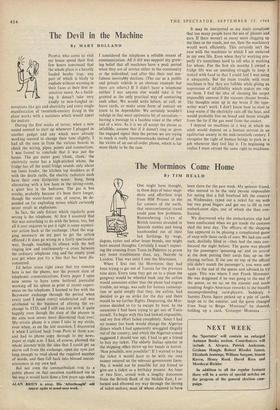 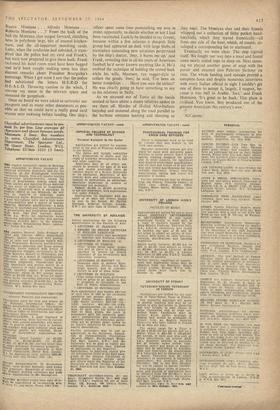 When 1 first met the Morminos they had been trying to get out of Tunisia for the previous nine days. Every time they got on to a plane the gangway would be wheeled back and the airline would announce either that the plane had engine trouble, no wings, was unfit for human consump- tion or quite simply that they, the airline, had decided to go on strike for the day and there would be no further flights. Despairing, the Mor- minos decided to try to escape by boat. In the meantime I had been trying to get out of Tunis myself. To begin with this had looked impossible, and my first effort failed completely. Since I had no money (no bank would change the Algerian dinars which I had apparently smuggled illegally out of the country, and which the Algerian consul suggested I should tear up), I had to get a friend to buy my ticket. The elderly Italian spinster in the shipping office threw up her hands in horror. `Non possibile, non possibile!' If l wanted to buy the ticket it would have to be with my own money entered on the relevant government form. No, it would not be possible for my friend to give me a ticket as a birthday present. An hour or two later, armed with a lengthy document from the British Bank of the Middle East, I re- turned and elbowed my way through the throng of ticket-seekers, most of whom claimed to have

been there for the past week. My spinster friend, who seemed to be the only person responsible for seeing that a full boatload left the country on Wednesday, typed out a ticket for me with her two good fingers and got me to fill in two embarkation slips, one of which she then con- fiscated.

We discovered why the embarkation slip had been confiscated when we got inside the customs shed the next day. The officers of the shipping line appeared to be playing a complicated game of snap with those cards of ours. We had one card each, dutifully filled in—they had the ones con- fiscated the night before. The game was played by the passengers 'queueing up' and on arrival at the desk putting their cards face up on the playing surface. If the one on top of the official pile didn't match the passenger's, you were sent back to the end of the queue and advised to try again. This was where I met Frank Mormino. He was doggoned if he was going to the end of the queue, so we sat on the counter and made insulting Anglo-American remarks to the blandly uncomprehending card-players. Suddenly a Sammy Davis figure picked up a pile of cards, leapt on to the counter, and the game changed from Snap to Bingo. 'Montana!' he shouted, holding up a card, `Guiseppe Montana . .

Bianca Montana . . . Alfredo Montana . . . Roberto Montana . . .1' From the back of the hall the Montana clan surged forward, clutching hens in polythene bags, bits of enamel kitchen- ware, and the all-important matching cards. Later, when the confusion had subsided, it trans- pired that the police had my card and Frank's, but were now prepared to give them back. Frank reckoned his hotel room must have been bugged and he'd been caught making some less than discreet remarks about President Bourguiba's Parentage. When I got mine I saw that the police had substituted the letters H-E-R-D for H-E-A-L-D. Throwing caution to the winds, 1 rewrote my name in the relevant space and mounted the gangplank.

Once on board we were asked to surrender our Passports and as many other documents as pos- sible.•so that we could have a really good card session next morning before landing. One ship's

officer spent some time pummelling my arm in order, apparently, to decide whether or not I had been vaccinated. Luckily he decided in my favour, because within a few minutes a sheepish little group had appeared on deck with large blobs of elastoplast concealing new atrocities perpetrated by the• ship's doctor. `Jeez, it burns me up,' said Frank, revealing that in all his years of American. football he'd never known anything like it. He'd evolved the technique of holding the crowd back while his wife, Maureen, ran rugger-style to collect the goods. `Jeez,' he said, 'I've been on better troopships . . . Have you seen the toilets?' He was clearly going to have something to say to his relations in Sicily.

As we steamed out of Tunis all the locals seemed to have about a dozen relatives apiece to see them off. Hordes of ill-dad Afro-Italians bicycled and motored along the road parallel to the harbour entrance hooting and shouting as they went. The Montana clan and their friends whipped out a collection of filthy pocket hand- kerchiefs, which they waved frenetically-all from one side of the boat, which, of course, de- veloped a corresponding list to starboard.

Eventually we were clear. The ship righted itself. We fought our way into a meal and found some neatly coiled rope to sleep on. Next morn- ing we played another game of snap with the purser and steamed into Palermo harbour on time. The whole landing card episode proved a complete hoax and despite numerous interviews with every Italian official in sight 1 couldn't get one of them to accept it, largely, I suspect, be- cause it was half in Arabic. `Jeez,' said Frank Mormino, 'It's great to be back. This place is civilised. You know, they produced one of the greatest Americans this century's seen.'