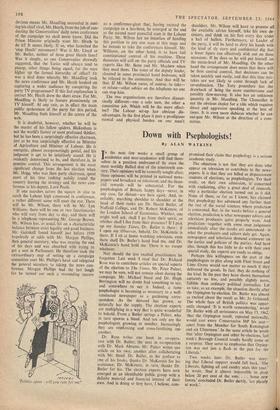 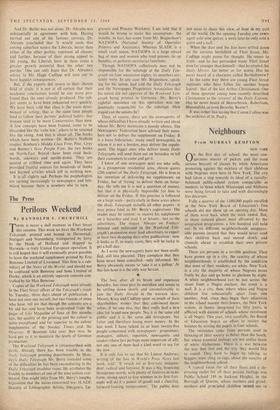 IN the next few weeks a small group of academics and near-academics will find them- selves in a position undreamt-of by even the most worldly Balliol don of the nineteenth cen- tury. Their opinions will be earnestly sought after; these opinions will be printed in national news- papers and broadcast on television; and the finan- cial rewards will be substantial. For the psephologists of Britain, happy days—never, in any case, far distant—are here again. And, in- evitably, marching shoulder to shoulder at the head of their ranks are Dr. David Butler, of Nuffield College, and Dr. Robert McKenzie, of the London School of Economics. Whither, one might well ask, shall I go from their spirit, or whither shall I flee from their presence? If I pick up my Sunday Times, Dr. Butler is there: if I open my Observer, behold, Dr. McKenzie is there. If I sit at home watching television, even there shall Dr. Butler's hand lead me, and Dr. McKenzie's hand hold me. There is no escape whatever.

Nor should the less exalted practitioners be forgotten. Last week I read that Dr. Richard Rose was to contribute articles on special aspects of the election to The Times. Mr. Peter Pulzer, we may be sure, will not remain silent during the campaign. Mr. Michael Steed and Dr. Hugh Herrington will no doubt find something to say, and somewhere to say it. Indeed, a tame psephologist is becoming as necessary to a well- conducted newspaper as a gardening corre- spondent. As the demand has grown, so naturally has the supply. The election experts are multiplying in a way that is quite wonderful to behold. From a Butler springs a Pulzer, who in turn spawns a Steed. And not only are the psephologists growing in number. Increasingly they ate reinforcing and cross-fertilising one another.

Dr. Rose writes one book in co-opera- tion with Dr. Butler; the next in co-operation with Dr. Mark Abrams. Mr. Pulzer writes one article on his own; another after collaborating with Mr. Steed. Dr. Butler, in the preface to one of his books, thanks Dr. McKenzie for his assistance; Dr. McKenzie, in turn, thanks Dr. Butler for his. The election experts have now emerged at an identifiable public group with a definite • material and financial interest of their own. And in doing so they have, I believe, com-

promised their claim that psephology is a serious academic study.

The objection is not that they are dons who appear on television or contributte to the news- papers. It is that they are billed as dispassionate students of elections, as psephologists. Yet their study, on their own admission, is concerned with explaining, after a great deal of research, why a particular election turned out as it did. None of them, so far as I know, has claimed that psephology has advanced any further than the rest of the social sciences where prediction is concerned. But, in the weeks before a general election, prediction is what newspaper editors and television producers quite properly want. And prediction —together with some snap judgments immediately after the results are announced—is what the produ6ers and editors duly get. Again, newspapers and television demand comment on the tactics and policies of the parties. And here also, though this has little to do with their own special study, the experts arc ready to oblige.

Perhaps this willingness on the part of the psephologists to play along with Fleet Street and Lime Grove would not matter so much if they delivered the goods. In fact, they do nothing of the kind. In the past they have shown themselves certainly no less, and possibly slightly more, fallible than ordinary political journalists. Let us take, as an example, the situation shortly after the Orpington by-election. Dr. Butler was almost as excited about the result as Mr. Jo Grimond. The whole face of British politics was appar- ently changed. 'It is worth remembering,' wrote Dr. Butler with all seriousness on May 13, 1962, 'that the Orpington result, repeated nationally, would cost every Conservative MP his seat— apart from the Member for South Kensington and six Ulstermen.' In the same article he wrote that 'after Orpington and other by-elections, last week's Borough Council results hardly come as a surprise. They serve to emphasise that Orping- ton was not just a flash in the pan for the Liberals.'

Two weeks later Dr. Butler was deny- ing that Liberal support would fall back. 'The Liberals, fighting all and sundry seats this year,' he wrote, 'find it almost impossible to drop

below 20 per cent of the vote Some new forces,' concluded Dr. Butler darkly, 'are plainly at work.'

And Dr. Butler was not alone. Dr. Abrams was substantially in agreement with him. Having carried out one of his famous surveys, Dr. Abrams concluded that 'it would seem that among suburban voters the Liberals, better than either of the other parties, represent all classes; and further, because of their strong appeal to the young, the Liberals have in these areas a greater growth potential than the other two parties.' One can only hope that Dr. Abrams's advice to Mr. Hugh Cudlipp will turn out to have happier consequences.

But, if the experts did return to their chosen field of study, it is not at all certain that their academic conclusions would be any more pro- found than the ones already produced. The sub- ject seems to have been exhausted very quickly. We have been told that class is the main deter- minant of voting; that at the same time people tend to follow their parents' political habits; that women tend to be more Conservative than men. A few concepts have been framed, some to be discarded like the 'cube law,' others to be retained like the swing. And that is about all. The books which have been written—Dr. Butler's Nuffield studies, Bonham's Middle Class Vote, Pear, Gray and Benney's How People Vote, the two books on North-East Bristol—have been read back- wards, sideways and upside-down. They are quoted or cribbed time and again. They have provided fruitful sources for hundreds of books and learned articles which tell us nothing new.

It is all slightly sad. Perhaps the psephologists are turning increasingly to newspapers and tele- vision because there is nowhere else to turn.