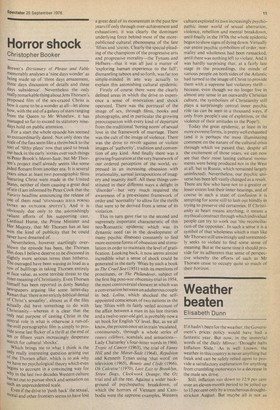 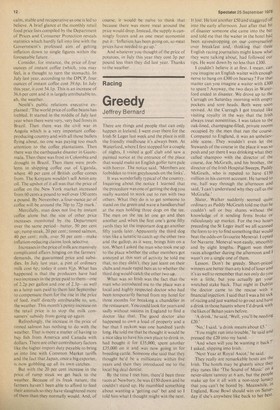 If it hadn't been for the weather, the Government's prices policy would have had a fantastic year. But now, in the immortal words of the Daily Mirror: 'Drought halts Inflation Slide.' As is well known, the weather in this country is never anything but freak and can be safely relied upon to provide a satisfactory explanation for anything from crumbling motorways to a decrease in the male sex drive.

Still, inflation was down to 12.9 per cent over an eleven-month period to be jolted up to 13 per cent only by a treacherous droughtstricken August. But maybe all is not as

calm, stable and recuperative as one is led to believe. A brief glance at the monthly retail food price lists compiled by the Department of Prices and Consumer Protection reveals statistics which hardly fall into line with the Government's professed aim of getting inflation down to single figures within the foreseeable future.

Nestle's public relations executive explained: 'The world price of coffee beans has trebled. It started in the middle of July last year when there were very, very bad frosts in Brazil. Then there was the civil war in Angola which is a very important coffeeproducing country and with all those bullets flying about, no one was paying too much attention to the coffee plantations. Then there was the earthquake disaster in Guatemala. Then there was frost in Colombia and drought in Brazil. Then there were problems in shipping coffee out of Uganda, where 40 per cent of British coffee comes from. The Kenyans wouldn't sell Amin any oil. The upshot of it all was that the price of coffee on the New York market increased from 60 cents a pound to well over 150 cents a pound. By November, a four-ounce jar of coffee will be around the 70p to 72p mark.'

Mercifully, man does not live by instant coffee alone but the size of other price increases monitored by the Department over the same period--butter, 50 per cent up; rump steak, 20 per cent ; tinned salmon, 40 per cent ; milk, over 50 per cent—make inflation-reducing claims look selective.

Increases in the price of milk are massively complicated affairs hinging on the farmers' demands, the guaranteed price and subsidies. In July last year, a pint of ordinary milk cost 6p; today it costs 9.12p. What has happened is that the producers have had two increases in the price paid to them--one of 2.2p per gallon and one of 2.3p—as well as a lump sum paid to them last September to compensate them for the rise in the price of feed, itself directly attributable to, urn, the weather. This month's penny increase on the retail price is to stop the milk consumers' subsidy from going up again.

Refreshingly, the increase in the price of tinned salmon has nothing to do with the weather. That is more a matter of having to buy fish from America and Canada with dollars. There are other contributory factors like the higher import duty payable to bring us into line with Common Market tariffs and the fact that Japan, once a big exporter, is now gobbling up all its own catches.

But with the 20 per cent increase in the price of rump steak we get back to the weather. Because of its freak nature, the farmers haven't been able to afford to feed their animals so they have slaughtered more of them than they normally would. And, of course, it would be naïve to think that because there was more meat around the price would drop. Instead, the supply is cunningly frozen and as one meat economist put it ; 'Inflation has been going on, so meat prices have needed to go up.'

And whatever you thought of the price of potatoes, in July this year they cost 3p per pound less than they did last year. Thanks to the weather.