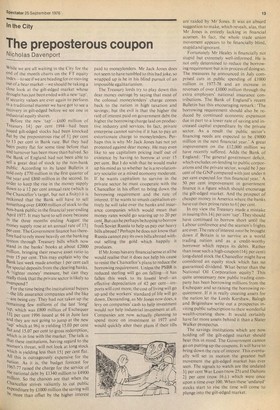 While we are all waiting in the City for the end of the month charts on the FT equity index—to see if we are heading for or moving out of a bear market—we should be taking a close look at the gilt-edged market whose drought hasjust been ended with a new 'tap'. If security values are ever again to perform in a traditional manner we have got to see a recovery in gilt-edged before we see one in industrial equity shares.

Before the new 'tap'—£600 million of Treasury 14.! per cent 1994—had been Issued gilt-edged stocks had been knocked flat by the preposterous rise of 1.! per cent to 13 per cent in Bank rate. But they had been pretty flat for some time before that and turnover has been more than halved. So the Bank of England had not been able to sell a great deal of stock to the non-bank Public. According to its latest Bulletin it sold only £770 million in the first quarter of the year and £860 million in the second. In order to keep the rise in the money supply down to a 12 per cent annual rate (which is the Chancellor's target, but not a fixity) it is reckoned that the Bank will have to sell something over £4000 million of stock to the non-bank public in the financial year ending April 1977. It may have to sell more because in the three months ending August the Money supply rose at an annual rate of 171 Per cent. The Government finance has therefore had to rely more heavily on the banking System through Treasury bills which now stand in the banks' books at about £2000 Million, bringing their reserve asset ratio to over 15 per cent. This may explain why the Bank last week made another 1 per cent call for special deposits from the clearing banks. A 'tighter money' measure, but can they really think that the private sector is likely to Overspend?

For the time being the institutional buyers —the life assurance companies and the like —are being coy. They had not taken up the remaining few millions of the last 'long' tap, which was £800 million of Exchequer 134 per cent 1996 issued at 94 in June last and they are not going to jump at the new tall' which at 961 is yielding 15.03 per cent flat and 15.07 per cent to gross redemption, Which is in line with the market. The talk is that these institutions, having regard to the seamen's threat, will not look at long stock Which is yielding less than 151 per cent flat. All this is outrageously expensive for the nation. As it is, the budget forecast for 1967-77 raised the charge for the service of the national debt by £1340 million to £4900 Million. So the chances are that when the Chancellor strives valiantly to cut public expenditure by £1000 million the saving will be more than offset by the higher interest

paid to moneylenders. Mr Jack Jones does not seem to have tumbled to this bad joke, so wrapped up is he in his blind pursuit of an impossible egalitarianism.

The Treasury lords try to play down this dear money outrage by saying that most of the colossal moneylenders' charge comes back to the nation in high taxation and savings; but the evil is that the higher the rate of interest paid on government debt the higher the borrowing charge laid on productive industry and services. In fact, private enterprise cannot survive if it has to pay an extortionate charge to moneylenders. Perhaps this is why Mr Jack Jones has not yet protested against dear money. He may even like to see capitalism pricing itself out of existence by having to borrow at over 15 per cent. But I do wish that he would make up his mind as to whether he is a revolutionary socialist or a mixed economy moderate. If he wants capitalism to survive in the private sector he must cooperate with the Chancellor in his effort to bring down the borrowing requirement and the rate of interest. If he wants to smash capitalism entirely he will take over the banks and insurance companies which would mean that money rates would go soaring up to 20 per cent. But can he perhaps be hoping to borrow from Soviet Russia to help us pay our heavy bills abroad ? Perhaps he does not know that Russia cannot pay its own bills abroad without selling the gold which happily it produces.

If M r Jones has any financial sense at all he would realise that it does not help his cause to resist the Chancellor's plans to reduce the borrowing requirement. Unless the PSBR is reduced sterling will go on falling—it has fallen this week to its lowest level—an effective-depreciation of 42 per cent—imports will cost more, the cost of living will go up and the workers' standard of life will go down. Demanding, as Mr Jones now does, a levy on companies' cash to help investment would not help industrial investment at all. Companies are now actually planning to spend more on investment in 1977 and would quickly alter their plans if their tills are raided by Mr Jones. It was an absurd suggestion to make, which reveals, alas, that Mr Jones is entirely lacking in financial acumen. In fact, the whole trade union movement appears to be financially blind, stupid and ignorant.

Fortunately Mr Healey is financially not stupid but extremely well-informed. He is not only determined to reduce the borrowing requirement but is in process of doing so. The measures he announced in July comprised cuts in public spending of £1000 million in 1977-78 and an increase in revenues of over £1000 million through the extra employers' national insurance contributions. The Bank of England's recent Bulletin has this encouraging remark : 'The borrowing requirement should also be reduced by continued economic expansion due in part to a lower rate of saving and increased capital expenditure by the private sector. As a result the public sector's financing needs are expected to be £9000 million in the next financial year.' A great improvement on the £12,000 million we have recently suffered. Adds the Bank of England: 'The general government deficit, which excludes on-lending to public corporations and the private sector, would be 3 per cent of the GNP compared with just under 6 per cent expected for this financial year.' A 50 per cent improvement in government finance is a figure which should encourage the gilt-edged market. And the prospect of cheaper money in America where the banks have cut their prime rates to 6'1 per cent.

In my view the Treasury made a mistake in issuing this 141 per cent 'tap'. They should have continued to borrow short until the Labour conference and the seamen's frights are over. The rate of interest must be brought down if Britain is to survive as a world trading nation and as a credit-worthy borrower which repays its debts. Rather than issue such a high-coupon (141 per cent) long-dated stock the Chancellor might have considered an equity stock which has no guaranteed dividend. What better than the National Oil Corporation equity? This quite unnecessary new public trading company has been borrowing millions from the Exchequer and so raising the borrowing requirement. If it is really creating assets for the nation let the Lords Kershaw, Balogh and Briginshaw write out a prospectus inviting public subscription to their wonderful wealth-creating show. It would certainly have far more assets behind it than a Slater Walker prospectus.

The savings institutions which are now holding off the gilt-edged market should bear this in mind. The Government cannot go on putting up the coupons. It will have to bring down the rate of interest. This eventually will set in motion the greatest bull movement the gilt-edged market has ever seen. The signals to watch are the undated 31 per cent War Loan (now 25) and Daltons 21 per cent (now 161% ) which were once upon a time over 100. When these 'undated' stocks start to rise the time will come to plunge into the gilt-edged market.