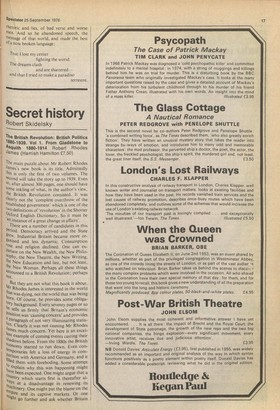 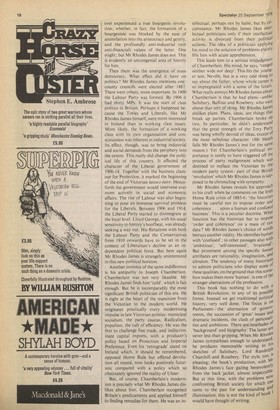 The British Revolution: British Politics 1880.-1939. Vol 1. From Gladstone to Asquith 1880-1914 Robert Rhodes James (Hamish Hamilton E7.50) The main puzzle about Mr Robert Rhodes James's new book is its title. Admittedly this is only the first of two volumes. The second will take the story up to 1939. Even S, after almost 300 pages, one should have some inkling of what, in the author's view, the British Revolution consisted. It was clearly not the 'complete overthrow of the established government* which is one of the two definitions of 'revolution' in the Shorter 9xford English Dictionary. So it must be an instance of a great change in affairs*. There are a number of candidates in this period. Democracy arrived and the State grew. Industrial Britain became more organised and less dynamic. Consumption rose and religion declined. One can exPatiate on the New Wealth, the New PhilosePhy, the New Theatre, the New Writing, the New Education and last, but not least, the New Woman. Perhaps all these things aillounted to a British Revolution; perhaps not.

nut they are not what this book is about. Mr Rhodes Jarhes is interested in the world that was dying, not the world that was being born. Of course, he provides some obligat,°rY background. Every seventy pages or so tle tells us firmly that Britain's economic Position was 'causing concern' and provides rt, Paragraph of not very illuminating stallsCs. Clearly it was not causing Mr Rhodes lairies much concern. Yet here is an excele,nt example of coming events casting their soadows before. From the 1880s the British eteonomy started to run down. Even conerri.Poraries felt a loss of energy in corn with America and Germany, and it ;Ilied them with foreboding. Some attempt 1..° explain why this was happening might

ve been expected. One might argue that a c:untry which starts first is thereafter al

YS a disadvantage in renewing its .aehinery. One might put the blame on the _111.Oire and its captive markets. Or one 'ght go further and ask whether Britain

ever experienced a true bourgeois revolution; whether, in fact, the formation of a bourgeoisie was blocked by the ease of assimilation into the aristocracy and gentry. and the profoundly anti-industrial (not anti-financial) values of the latter. One might ; but Mr Rhodes James does not. This is evidently an uncongenial area of history for him.

Then there was the emergence of mass democracy. What effect did it have on politics? Mr Rhodes James mentions one: county councils were elected after 1887. There were others, more important. In 1900 the Labour Party was formed. By 1906 it had thirty MPs. It was the start of class politics in Britain. Perhaps it happened because the Tories and Liberals, like Mr Rhodes James himself, were more interested in Ireland than in working class issues. More likely, the formation of a working class with its own organisation and consciousness was inherent in industrial society. Its effect, though, was to bring industrial and social demands from the periphery into the centre. This really did change the political life of this country. It affected the character of the Liberal government of 1906-14. Together with the business clamour for Protection, it marked the beginning of the end of Victorian laissez-faire. Henceforth the government would intervene ever more actively in social and economic affairs. The rise of Labour was also beginning to pose an immense survival problem for the Liberals. Between 1906 and 1914, the Liberal Party started to disintegrate at the local level. Lloyd George, with his usual sensitivity to history's hoofbeat, was already seeking a way out. His flirtations with both the Labour Party and the Conservatives from 1910 onwards have to be set in the context of Liberalism's decline as an independent political force. But here again Mr Rhodes James is strangely uninterested in this new political horizon.

Another instance of the same indifference is his antipathy to Joseph Chamberlain. Chamberlain was not very likeable. Mr Rhodes James finds him 'cold', which is fair enough. But he is incomparably the most significant British politician of this era. He is right at the heart of the transition from the Victorian to the modern world. He originates practically every modernising impulse in late Victorian politics: municipal socialism, the party caucus, Radicalism, populism, the cult of efficiency. He was the first to challenge free trade, and indiscriminate capital exports, with a producer's policy based on Protection and Imperial Preference. Even his 'retrograde' stand on Ireland which, it should be remembered, opposed Home Rule but offered devolution all round, now looks positively futuristic compared with a policy which so obstinately ignored the reality of Ulster.

But, of course, Chamberlain's modernism is precisely what Mr Rhodes James dislikes about him. Chamberlain recognised Britain's predicaments and applied himself to finding remedies for them. He was an in tellectual, perhaps not by habit, but by circumstance. Mr Rhodes James likes intellectual politicians only if their intellectual activity is divorced from their political actions. The idea of a politician applying his mind to the solution of problems plainlY fills him with acute apprehension.

This leads him to a serious misjudgment of Chamberlain. His mind, he says, 'ranged neither wide nor deep'. This fits the younger son, Neville, but is a very odd thing to say about the father, whose whole career Is so impregnated with a sense of the future. What really annoys Mr Rhodes James about Chamberlain is that he had plans—unlike Salisbury, Balfour and Rosebery, who were above that sort of thing. Mr Rhodes James dislikes plans. Plans, ideas, are things that break up parties. Chamberlain broke UP two. In particular, he didn't understand that the great strength of the Tory Party was being wholly devoid of ideas, except of the most nebulous character. ( Mr Heath fails Mr Rhodes James's test for the same reason.) Yet Chamberlain's political itnportance is surely to have triggered off the process of party realignment which was destined to replace the Victorian by the modern party system : part of that British 'revolution' which Mr Rhodes James is supposed to be chronicling with sympathy. Mr Rhodes James reveals his approach to his craft when he comments on the Irish Home Rule crisis of 1885-6: 'the historian must be careful not to impose order and coherence. . . upon a human and confused business'. This is a peculiar doctrine. What function has the historian but to impose 'order and coherence' on a mass of raw data? Mr Rhodes James's choice of words betrays another oddity. He identifies human with 'confused' ; in other passages also with 'ambitious', 'self-interested', 'irrational But prominent among the specific human attributes are rationality, imagination, and altruism. The tendency of many historians, to admire politicians who display none 0' these qualities, on the ground that this some

makes them more 'human', is one of the stranger aberrations of the profession.

This book has nothing to do with a British Revolution, in any of its possible forms. Instead we get traditional political history, very well done. The focus is on Parliament—the alternation of governments, the succession of 'great' issues an" dramatic incidents, the clash of personal'', ties and ambitions. There are interludes 0' 'background' and biography. The latter are never less than gripping. When Mr Rhodes James sympathises enough to understanu.. he produces memorable writing in his sketches of Salisbury, Lord RandolP.11 Churchill and Rosebery. The style, too, is pleasing; the book's production, with Mr Rhodes James's face gazing benevolent from the back jacket, almost impeccable. But at this time, with the problems 110u/ confronting British society for which one, turns to the past for understanding anu, illumination, this is not the kind of book would have thought of writing.