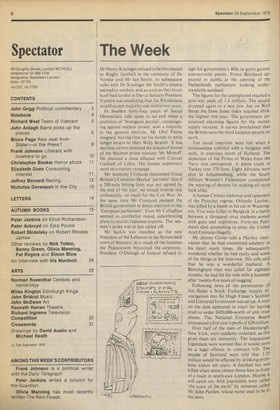 Dr Henry Kissinger refused to be introduced to Rugby football in the company of Dr Vorster and Mr Ian Smith. In subsequent talks with Dr Kissinger Mr Smith's resolve seemed to weaken, and as soon as the cloven hoof had landed in Dar es Salaam President Nyerere was predicting that the Rhodesians would accept majority rule within two years.

In Swe.den forty-four years of Social Democratic rule came to an end when a coalition of 'bourgeois parties', campaigning against nuclear power, won a majority in the general election. Mr Olof Palme resigned, having time on his hands to write longer letters to Herr Willy Brandt. A less decisive victory renewed the tenure of power of the Maltese prime minister Mr Mintoff. He planned a close alliance with Colonel Gaddafi of Libya. His female supporters went on a victory rampage.

Mr Anthony Crosland threatened Great Britain's Common Market 'partners' that if a 200-mile fishing limit was not agreed by the end of the year, we would impose one unilaterally: so much for the Cod War. At the same time Mr Crosland pledged the British government to direct elections to the 'European parliament'. Even Mr Callaghan seemed in combative mood, adumbrating plans to restrict Japanese imports. The seamen's strike was at last called off.

Mr Sarkis was installed as the new President of the Lebanon in the Syrian-held town of Shtoura: as a result of the location the Palestinians boycotted the ceremony. President O'Dalaigh of Ireland refused to sign his government's Bills to grant greater anti-terrorist power. Prince Bernhard appeared in public at the opening of the Netherlands parliament looking understandably subdued.

The figures for the unemployed reached a post-war peak of 1.3 million. The pound dropped again to a new low, but on Wall Street the Dow Jones index touched 1014, the highest this year. The government announced alarming figures for the money supply increase. A survey proclaimed that the British were the third happiest people on earth.

Ten naval reservists were lost when a minesweeper collided with a freighter and sank, in exercises north of Holland. The departure of the Prince of Wales from the Navy was announced. A plane crash in Turkey cost 170 lives. Eight Africans were shot in Johannesburg, while the South African Women's Federation condemned the wearing of denims for making all races look alike.

A former Chilean diplomat and opponent of the Pinochet regime, Orlando Letelier, was killed by' a bomb in his car ill Washington. Five were killed in Bangkok in a battle between a thousand rival students armed with guns and explosives. Forty-six Pakistanis died attempting to enter the United Arab Emirates illegally.

Mr Jimmy Carter told a Playboy interviewer that he had committed adultery in his heart many times. He subsequently wondered whether he had really said some of the things in the interview. His wife said that he was a wonderful husband. A Birmingham man was jailed for eighteen months: he had hit his wife with a hammer after 'twenty-five years of nagging'.

Following news of the prosecution of Jim Slater a Stock Exchange inquiry investigation into Sir Hugh Fraser's Scottish and Universal Investment was set up. A man on the dole appeared in court for having tried to order £450,000-worth of unit trust shares. The National Enterprise Board announced a first year's profit of £29 million.

Over half of the men of Handenbergh. New York, were suddenly ordained, as this gives them tax immunity. The loquacious Ugandans were warned that it would soon be a legal offence to contract VD. The people of Scotland were told that 1.25 million would be affected by drinking problems within ten years. A football fan was killed when some others threw him in front of a train in south-east London. Maybe it will catch on. And journalists were called 'the scum of the earth' by someone called Mr John Pardoe, whose name used to be in the news.