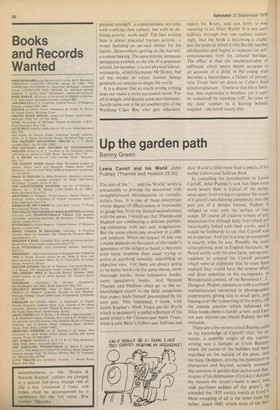 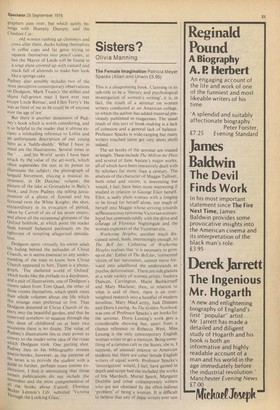 Up the garden path

Lewis Carroll and his World John Pudney (Thames and Hudson £3.50) The aim of the '. . . and his World' series is presumably to provide the newcomer with straightforward introductions to complex artistic lives. It is one of those enterprises whose degree of effectiveness is impossible to gauge but, from my limited acquaintance with the series, I would say that Thames and Hudson are conducting a delicate publishing enterprise with tact and imagination. But the series places any reviewer in a difficult position. When the impact of any one volume depends on the extent of the reader's ignorance of the subject at hand, it becomes even more hopeless than usual trying to arrive at anything remotely resembling an objective view. For there are always going to be better books on the same theme, more thorough books, more exhaustive books, more speculative books. And because Thames and Hudson often go to the acknowledged expert in the field, sometimes that expert finds himself pre-empted by his own past. This happened, I think, with Justin Kaplan's Mark Twain and his World which is necessarily a pallid reflection of the same writer's Mr Clemens and Mark Twain, while Leslie Baily's Gilbert and Sullivan and their Workl is little more than a precis of his earlier Gilbert and Sullivan Book.

In compiling his introduction to Lewis Carroll, John Pudney's task has been even more severe than is typical of the series. since apart from trying to squeeze the ocean of Carroll's bewildering complexity into the pint pot of a slender format, Pudney is obliged to treat only the surface of that ocean. Of course all creative writers of any distinction live through daily lives which are inextricably linked with their works, and it would be foolhardy to say that Carroll was an exception. And yet in a way an exception is exactly what he was. Possibly the most schizophrenic poet in English literature, he flirted archly with his own fame, taking precautions to conceal his Carroll persona which were so elaborate that he must have realised they would have the reverse effect and draw attention to the incongruity, in Wonderland context, of the Reverend C. L. Dodgson. Pudney presents us with a celibate mathematician immersed in photographic experiments, giving teas to small girls, and fussing over the typesetting of his works. Of the intense passion which informed his Alice books there is hardly a hint, and I an' not sure anyone can blame Pudney for the omission.

There are a few points which Pudney adds to my knowledge of Carroll: that, for in. stance, a possible origin of the mirror' writing was a fanlight at Croft Rectory where the names of the builders had been inscribed on the outside of the glass, that the fussy Dodgson, driving his publishers to distraction and beyond, actually invented the common or garden dust-jacket and that, in spite of his detestation of cricket ('Amidst thy bowers the tyrant's hand is seen; and rude pavilions sadden all thy green'), attended the 1855 varsity match at Lord s.. Most revealing of all is the letter from his father, dated 1840, which most of the bio

graphers pass over, but which surely belongs with Humpty Dumpty and the Cheshire Cat : . . . old women rushing up chimneys and cows after them, ducks hiding themselves in coffee cups and fat geese trying to squeeze themselves into pencil cases; at last the Mayor of Leeds will be found in a soup plate covered up with custard and stuck full of almonds to make him look like a sponge cake ...

Pudney also sensibly includes two of the most perceptive contemporary observations on Dodgson, Mark Twain's 'the stillest and Shyest full-grown man I have ever met except Uncle Remus', and Ellen Terry's 'He was as fond of me as he could be of anyone over the age of ten'.

But there is another dimension of Pudfley's book which is worth considering, and iS so helpful to the reader that it almost excuses a misleading reference to Lolita and an unfortunate description of our young hero as a 'fuddy-duddy'. What I have in mind are the illustrations. Several times in the . . and his World' series I have been struck by the value of the art-work, which Often supersedes the text in its power to illuminate the subject; the photograph of languid Stevenson, playing a musical instrument, in Dr Daiches' volume; the Picture of the lake at Grimsdyke in Baily's book; and from Pudney the telling juxtaPosition of a photo of Tenniel and his fictional twin the White Knight; the shot, extraordinary in its evocation of period, taken by Carroll of six of his seven sisters; and above all the occasional glimpses of the Oxford bolthole, at which point the reader finds himself balanced perilously on the tightrope of tempting allegorical speculation.

Dodgson spent virtually his entire adult life hiding behind the palisades of Christ Church, so it seems essential to any understanding of the man to know how Christ Church appeared to him. There is a photograph, 'The sheltered world of Oxford' Which looks like the prelude to a daydream, and a pair of illustrations, one of Dodgson's rooms taken from Tom Quad, the other of those rooms themselves, which speak more than whole volumes about the life which this strange man preferred to live. That Dodgson dreamed at Christ Church of reentry into the beautiful garden, and that he contrived somehow to squeeze through the tiny door of childhood on at least two Occasions there is no doubt. The value of PLIdney's illustrations lies in their power to Convey to the reader some idea of the route Which Dodgson took. One parting shot. Kidney lists in his bibliography sixteen source-books; however, as the purpose of the series is to provide the student with a guide to further, perhaps more intense exploration, I find it astonishing that those sixteen publications do not include the shrewdest and the most comprehensive of all the books about Carroll, Florence reker Lennon's Life, subtitled 'Victoria