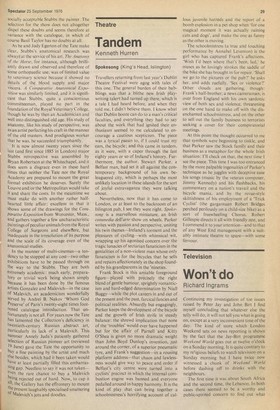 Travellers returning from last year's Dublin Theatre Festival were agog with tales of this one. The general burden of their babblings was that a blithe new Irish playwriting talert had turned up there, which is a tale I had heard before, and when they told me, I didn't believe them. t know what that Dublin booze can do to a man's critical faculties, and everything they had to say about the work that had ignited their enthusiasm seemed to me calculated to encourage a cautious scepticism. The piece was a lyrical paean to, if I could trust my ears, the bicycle; and this came in tandem, as it were, with a caper through the last eighty years or so of Ireland's history. Furthermore, the author, Stewart Parker, a Belfast man, had set it all against the contemporary background of his own beleaguered city, which is perhaps the most unlikely location in these islands for the sort of joyful extravaganza they were talking about.

Nevertheless, now that it has come to London, or at least to the backroom of an Islington pub, [see they were right. Spokesong is a marvellous miniature, an Irish conunedia dell'arte show on wheels. Parker writes with passion and perspective, uniting his twin themes—Ireland's torment and the pleasures of cycling—with whimsical wit, wrapping up his agonised concern over the tragic lunacies of sectarian fanaticism in the genialities of a non-violent man whose only fanaticism is for the bicycles that he sells and repairs affectionately in the shop founded by his grandparents in the 'nineties.

Frank Stock is this amiable foreground figure—played with precisely the right blend of gentle humour, sprightly romanticism and hard-edged determination by Niall Buggy—while the plot careers in and out of the present and the past, farcical fancies and political realities. Absurdly but engagingly, Parker keeps the development of the bicycle and the growth of Irish strife in steady balance: the shrewd implication that none of the 'troubles' would ever have happened but for the affair of Parnell and Kitty O'Shea is given no more dramatic weight than John Boyd Dunlop's invention, just

around the corner, of a superior pneumatic tyre, and Frank's suggestion—in a rousing platform address—that chaos and lawless ness would give way to peace and order if Belfast's city centre were turned into a cyclists' precinct in which the internal combustion engine was banned and everyone pedalled around in happy harmony. It is the kind of play that can bring together a schoolmistress's horrifying account of cal lous juvenile hatreds and the report of a bomb explosion in a pet shop when 'for one magical moment it was actually raining cats and dogs', and make the one as funny as the other is moving.

The schoolmistress (a true and touching performance by Annabel Leventon) is the girl who has captured Frank's affections. 'Wish I'd been where that's been, lad,' he muses as he lovingly strokes the saddle of the bike she has brought in for repair. 'Shall we go to the pictures or the pub?' he asks her, and adds ruefully, 'Sex or violence?' Other clouds are gathering, though: Frank's half-brother, a news cameraman, is over from England with his own sardonic view of both sex and violence, threatening on the one hand to make off with the disenchanted schoolmistress, and on the other to sell out the family business to terrorists seeking a cover for their conspiratorial meetings.

At this point the thought occurred to me that symbols were beginning to tinkle, and that Parker saw the Stock family and their business as a metaphor for the whole Irish situation: I'll check on that, the next time I see the piece. This time I was too entranced by the more palpable ingenuities of Parker's technique as he juggles with deceptive ease his songs (music by the veteran composer, Jimmy Kennedy) and his flashbacks, his commentary on a nation's travail and the bicycle mania, and by the revue-style skittishness of his employment of a 'Trick Cyclist' (the gargantuan Robert Bridges perched perilously on a child-size bike) as a sort of freewheeling Chorus. Robert Gillespie directs it all with friendly zest, and I commend it to your attention—and to that of any West End management with a suitably intimate theatre to spare—with some fervour.