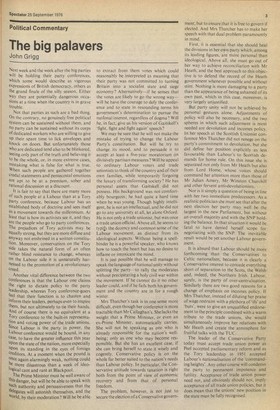 Next week and the week after the big parties Will be holding their party conferences, Which some would describe as vigorous expressions of British democracy, others as the grand finale of the silly season. Either way they are potentially dangerous occasions at a time when the country is in grave trouble.

Not that parties as such are a bad thing. On the contrary, no genuinely free political System can be sustained without them, and no party can be sustained without its corps of dedicated workers who are willing to give LIP their spare time to lick envelopes and knock on doors. But unfortunately those Who are dedicated tend also to be blinkered, seeing only part of the truth and believing it to be the whole, or, in more extreme cases, mistaking what is false for what is true. When such people are gathered together credal statements and pentecostal emotions are apt to be at a premium, sober and rational discussion at a discount.

It is fair to say that there are many more of such people at a Labour than at a Tory Party conference, because Labour has an established body of doctrine and sees itself as a movement towards the millennium. At least that is how its activists see it, and they are the people who go to party conferences. The prejudices of Tory activists may be equally strong, but they are more diffuse and anyway not enshrined in a written constitution. Moreover, conservatism on the Tory Side takes the natural form of an often rather blind resistance to change, whereas on the Labour side it is unnaturally harnessed to the promotion of a revolutionary creed.

Another vital difference between the two conferences is that the Labour one claims the right to dictate policy to the party leadership, whereas Tory conference-goers feel that their function is to chasten and inform their leaders, perhaps even to inspire them, but not ultimately to tie their hands. And of course there is no equivalent at a Tory conference to the built-in representation and voting power of the trade unions. Since Labour is the party in power, the Labour conference would be bound, in any case, to have the greater influence this year Upon the state of the nation, more especially Upon its standing in the eyes of foreign creditors. At a moment when the pound is ?nee again alarmingly weak, nothing could more disastrous than a week of ideological cant and rant at Blackpool.

The Prime Minister must be well aware of this danger, but will he be able to speak with such authority and persuasiveness that the delegates will astonish themselves, and the world, by their moderation? Will he be able

to extract from them votes which could reasonably be interpreted as meaning that their party was not committed to turning Britain into a socialist state and siege economy ? Alternatively—if he senses that the votes are likely to go the wrong way— will he have the courage to defy the conference and to state in resounding terms his government's determination to pursue the national interest, regardless of dogma? Will he, in fact, give us his version of Gaitskell's 'fight, fight and fight again' speech?

We may be sure that he will not make the mistake of trying to change the Labour Party's constitution. But will he try to change its mood, and to persuade it to accept at least a five-year moratorium on divisively partisan measures? Will he appeal to ordinary Labour voters and trade unionists to think of the country and of their own families, while temporarily forgoing the luxury of transforming society? He has personal assets that Gaitskell did not possess. His background was not comfortably bourgeois; he had quite a hard time when he was young. Though highly intelligent, he is not an intellectual, and he did not go to any university at all, let alone Oxford. He is not only a trade unionist, but was once a trade union official. Above all, he seems to typify the decency and common sense of the Labour movement, as distinct from its ideological aspects. Without being a spellbinder he is a powerful speaker, who knows how to touch the heart but has no desire to inflame or intoxicate the mind.

It is just possible that he will manage to speak the language of national unity without splitting the party—to rally the moderates without precipitating a holy civil war within the movement. If he cannot do it no other leader could, and if he fails both his government and the country are in for a rough winter.

Mrs Thatcher's task is in one sense more difficult, even though her conference is more tractable than Mr Callaghan's. She lacks the weight that a Prime Minister, or even an ex-Prime Minister, automatically carries. She will not be speaking as one who is already responsible for the nation's wellbeing; only as one who may become responsible. But she has an excellent case, if she can bring herself to state it wisely and cogently. Conservative policy is on the whole far better suited to the nation's needs than Labour policy. In particular, the Conservative attitude towards taxation is right both from the point of view of economic recovery and from that of personal freedom.

The problem, however, is not just to secure the election of a Conservative govern

ment, but to ensure that it is free to govern if elected. And Mrs Thatcher has to make her speech with that dual problem paramountly in mind.

First, it is essential that she should heal the divisions in her own party which, among its leading figures, are more personal than ideological. Above all, she must go out of her way to achieve reconciliation with Mr Heath, and the best approach to this objective is to defend the record of the Heath government whenever possible and without stint. Nothing is more damaging to a party than the appearance of being ashamed of its own past, which in this case, moreover, is very largely unjustified.

But party unity will not be achieved by personal gestures alone. Adjustments of policy will also be necessary, and the two spheres in which such adjustment is most needed are devolution and incomes policy. In her speech at the Scottish Unionist conference Mrs Thatcher did not renege on the party's commitment to devolution, but she did define her position explicitly as less favourable than Labour's to Scottish demands for home rule. On this issue she is separated not only from Mr Heath but also from Lord Home, whose voices should command her attention more than those of Mr Julian Amery, Mr Winston Churchill and other fervent anti-devolutionists.

Nor is it simply a question of being in line with her two immediate predecessors. As a realistic politician she must see that after the next election her party may well be the largest in the new Parliament, but without an overall majority and with the SNP holding the balance. In that situation it would be fatal to have denied herself scope for negotiating with the SNP. The inevitable result would be yet another Labour government.

It is absurd that Labour should be more forthcoming than the Conservatives to Celtic nationalism, because it is clearly a Conservative interest to concede everything short of separation to the Scots, the Welsh and, indeed, the Northern Irish. Labour, surely, is the party of over-centralisation. Similarly there are two good reasons for a change of emphasis on incomes policy. If Mrs Thatcher, instead of diluting her praise of wage restraint with a plethora of 'ifs' and 'buts', were to give an unqualified endorsement to the principle combined with a warm tribute to the trade unions, she would simultaneously improve her relations with Mr Heath and create the atmosphere for fruitful talks with the TUC.

The leader of the Conservative Party today must accept trade union power as Peel accepted parliamentary reform and as the Tory leadership in 1951 accepted Labour's nationalisation of the 'commanding heights'. Any other course will condemn the party to permanent impotence and futility. Acceptance of trade union power need not, and obviously should not, imply acceptance of all trade union policies, but it does mean that the unions' new position in the state must be fully recognised.