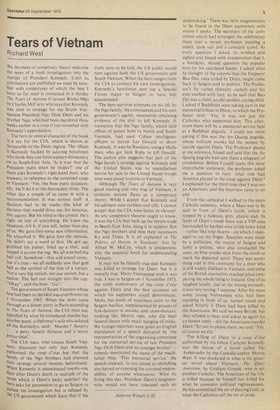 We devotees of conspiracy theory welcome the news of a fresh investigation into the murder of President Kennedy. Until its conclusions are published we must be satisfied with conjectures of which the best I have so far read is contained in a thriller The Tears of Autumn (Coronet Books 90p) by Charles McCarry who says that Kennedy Was shot in revenge for the South Vietnamese President Ngo Dinh Diem and his brother Ngu, who had been murdered three weeks earlier in a coup d'etat mounted with Kennedy's approbation.

The hero or central character of the book IS a spy for the CIA, which is shown as favourable to the Diem regime. The villain IS Kennedy backed by adoring henchmen Who think they can force western democracy on to South-East Asia. 'Is it true that the President putts when he thinks?' one of them asks Kennedy's right-hand man, who answers, in reference to the proposed coup in Vietnam: 'Yes, the boss putts occasionally. He'll do it at the damnedest times. The Other day a couple of us came in with a recommendation. It was serious stuff. A decision had to be made—the kind of decision that would drive me, for instance, into agony. But his mind is like crystal. He's right on top of everything. He knew the situation, felt it, if you will, better than any of us. We gave him some new information. He absorbed it. We gave him the options. He didn't say a word at first. He got up, grabbed his putter, lined up a shot, and tapped it across the rug. We all watched the ball roll. Somehow—this will sound corny, but it's true—we all suddenly saw that golf ball as the symbol of the fate of a nation. Not a very big nation, not our nation, but a nation. The ball ran straight into the cup. "Okay", said the boss. "Go".'

November 1963. When the news came through at a dinner party in Paris according to The Tears of Autumn, the CIA man was aPpalled by what he considered murder but another guest, a diplomat's wife who adored all the Kennedys, said: 'Murder? Surgery • • . a petty Asiatic dictator and a secret Police chief.'

The CIA man, who knows South Vietnam, discovers not only that Kennedy authorised the coup d'etat but that the family of the Ngo brothers had planned their revenge several months beforehand. When Kennedy is assassinated twenty-one clays after Diem's death (a multiple of the seven which is Diem's lucky number) the hero asks for permission to go to Saigon to Pursue his investigation but is refused by the US government which fears that if the truth were to be told, the US public would turn against both the US government and South Vietnam. When the hero resigns from the CIA to conduct his own investigations, Kennedy's henchman sent out a Special Forces major to Saigon to have him assassinated.

The hero survives attempts on his life by the Ngo family, the communists and his own government's agents, meanwhile obtaining evidence of the plot to kill Kennedy. It transpires that the Ngo family, which held offices of power both in North and South Vietnam, had used Cuban intelligence officers to recruit Lee Oswald to shoot Kennedy. It was the Russians, using a Mafia man, who got Jack Ruby to kill Oswald. The author also suggests that part of the Ngo family's revenge against Kennedy and the United States was to manufacture heroin for sale to the United States troops who were about to come to Vietnam.

Although The Tears of Autumn is very good reading and very true of Vietnam, it contains serious flaws as a conspiracy theory. While I accept that Kennedy and his advisers were ruthless and silly, I cannot accept that the CIA were better or cleverer. As any conspiracy theorist ought to know, it was the CIA that built up the heroin trade in South-East Asia, using it to support first the Ngo brothers and then their successors Ky and Thieu. It is all explained in The Politics of Heroin in Southeast Asia by Alfred W. McCoy, which is unquestionably the essential book for understanding Vietnam.

It may not be literally true that Kennedy was killed in revenge for Diem, but it is morally true. Many Vietnamese wish it was true. I was in Saigon on 1 November 1973, the tenth anniversary of the coup d'etat against Diem and the first occasion on which his supporters could demonstrate. Many bus loads of mourners came to the Saigon basilica, supplemented by groups of folk-dancers in smocks and cross-dancers, looking like Morris men, who did their funeral dance with much banging of sticks. We foreign reporters were given an English translation of a speech delivered by 'the representatives of the organising committee for the memorial service of late President Ngo Dinh Diem and his younger brother.— nobody mentioned the name of the muchhated Nhu. 'This memorial service,' the speech claimed, 'is not aimed at rekindling any hatred or exposing the criminal responsibility of anyone whatsoever. Were he living this day, President Diem's magnanimity would not have tolerated such an

undertaking.' There was little magnanimity to be found in the Diem supporters with whom I spoke. The secretary of the committee which had arranged the celebratory mass was a severe professor wearing a smart, dark suit and a constant scowl. At every question I asked, he writhed and sighed and hissed with exasperation that I, a foreigner, 'should question the popular love for his murdered leader. I asked what he thought of the reports that the Emperor Bao Dai, once exiled by Diem, might come back to Saigon and to politics. The Professor's lip curled (literally curled) and his eyes swelled with fury, as he said that Bao Dai was a child, an old spoiled, crying child. I asked if Buddhists were taking part in the memorial tribute to Diem, to which the Professor said: 'Yes, it was not just the Catholics who supported him. This afternoon there will be a memorial service held at a Buddhist pagoda.' I could not resist asking if this was the An Quang pagoda, whose militant monks led the protest by suicide against Diem. The Professor glared at me sideways, hissed and said that the An Quang pagoda had sent them a telegram of condolence. Before I could query this most improbable statement, the professor asked me a question in turn: what role had America played in the coup against Diem? I explained for the third time that I was not an American, and the interview came to an end.

From the cathedral I walked to the main Catholic cemetery, where a Mass was to be said in front of Diem's tomb, which is topped by a hideous, grey, plastic slab. In front of Diem's tomb there was a VIP area barricaded by barbed wire of the latest kind —rather like rose thorns—on which I managed to cut my finger. Speeches were made by a politician, the mayor of Saigon and lastly a prelate, who also conducted the mass, as blue smoke shot from the tomb to mark the departed spirit. There was something odd in this ceremony for a man who is still widely disliked in Vietnam, and some of the British journalists cracked jokes comparing the whole thing to Ireland. One of us laughed loudly, just at the wrong moment: it was very wrong, I suppose. After the mass some young Vietnamese who had been standing in front of us, turned round and asked bitterly if Diem had been killed by the Americans. We said we were British, but they refused to hear and asked us again for an honest reply—did the Americans murder Diem ? So just to please them, we said : 'Yes, of course we did.'

The killing of Diem in a coup d'etat authorised by his fellow Catholic Kennedy was the theme of a novel called The Ambassador by the Catholic author Morris West. It was predicted in what is the greatest novel about Vietnam, The Quiet American, by Graham Greene, who is yet another Catholic. The American of the title is killed because he himself has killed for what he considers political righteousness. He has committed the sin of playing God, or what the Catholics call the sin of pride.