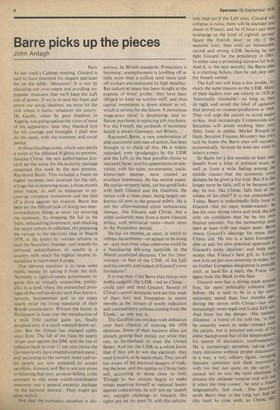 Barre picks up the pieces

Paris At last week's Cabinet meeting, Giscard is said to have thumped his elegant patrician fist on the table: 'Messieurs! It is not by placating our own voters and avoiding unpopular measures that we'll keep the Left out of power. If we're to save the franc and prove our social idealism, we must hit the rich where it hurts—whatever the outcry. De Gaulle, when he gave freedom to Algeria, was going against the views of most of his supporters: later they thanked him for his courage and foresight. I shall now do the same, with the economy and social justice.'

In these Gaullian tones, which were partly a swipe at his defeated Rightist ex-premier, Jacques Chirac, the new authoritarian Giscard set the scene for the austerity package presented this week by the new premier, Raymond Barre. This included a freeze on higher incomes, new taxation for the rich, a huge rise in motoring taxes, a three-month price freeze, as well as measures to encourilge company investment and the hint of a drive against tax evasion. Barre has been set the difficult task of doing two nearcontradictory things at once: (a) restoring the economy, by stopping the fall in the franc, relaunching investment, and checking the recent upturn in inflation; (b) preparing the run-up to the elections (due in March 1978. at the latest) by various reforms to steal the Socialists' thunder, and notably by enforced redistribution of wealth in a country with much the highest income inequalities in north-west Europe.

One obvious equation is to raise some public money by taking it from the rich. Normally a right-of-centre government regards this as virtually impossible, politically, in a land where the entrenched privileges of the well-to-do are such that doctors, lawyers, businessmen and so on enjoy nearly twice the living standards of their British counterparts. Witness the furore in Parliament in June over the introduction of a mild little capital gains tax, finally accepted only in a much watered-down version. But the climate has changed subtly since June. The fall of the franc by nearly 10 per cent against the DM, and the rise of inflation back to over 11 per cent (twice the German level), have created a certain panic; and according to the surveys, most well-todo people are now prepared to accept sacrifices. Giscard and Barre are not alone in believing that now, as never before, is the moment to slip some wealth-distribution measures into a general austerity package 'in the national interest'. They might get away with it.

Not that the economic situation is dis

astrous, by British standards. Production is booming; unemployment is levelling off at little more than a million (and many laid off workers are cushioned by high benefits). But industrial peace has been bought at the expense of firms' profits: they have been obliged to keep on surplus staff, and thus capital investment is down almost to nil, which is serious for the future. A pernicious wage-price spiral is developing, and inflation psychosis is replacing job psychosis. For the French, the yardstick of economic health is always Germany, not Britain.

Raymond Barre, a rare combination of able economist and man of action, has been brought in to check all this. He is widely regarded, even (grudgingly) by the UDR and the Left, as the best possible choice to succeed Chirac; and his appearances on television, with his calm, no-nonsense, uncleknows-best manner, have created an excellent impression. He has several assets. He carries no party label, yet has good links with both Giscard and the Gaullists. He comes with a clean sheet, being largely unknown till now to the general public. He is not the often-resented elitist technocratic Marque, like Giscard and Chirac, but a sober university man from a more classical milieu, with provincial roots—much more in the Pompidou mould.

He has six months, at most, in which to redress the economy—or appear to be doing so—and thus limit what otherwise could be a humiliating left-wing landslide in the March municipal elections. Can his 'plan' succeed in face of the UDR, of the Left and the unions, and indeed of Giscard's own limitations?

It is true that, if the Barre plan failsjo win public support, the UDR—led by Chirac— could turn and rend Giscard. Several of Chirac's senior assistants told me this week of their fury and frustration in recent months at the 'stream of woolly indecisive and contradictory policies coming from the Elysee,' as one put it.

The Gaullists are stricken with defeatism over their chances of winning the 1978 elections. Some of their business allies are already getting their money out while they can, to Switzerland or even the United States. And yet, the UDR as a whole know that if they are to win the elections, they need Giscard, as he needs them. They are all too aware of the electoral dangers of rocking the boat, and this applies to Chirac himself, according to those close to him. Though he has already begun to make noises asserting himself as national leader against collectivism, he will not yet launch any outright challenge to Giscard. His sights are set on post-78, with the calcida tion that (a) if the Left wins, Giscard will collapse in ruins, there will be disorder and chaos in France, and he (Chirac) can then re-emerge as the kind of rightish saviour figure the French love: or (b) if the majorite wins, then with an honourable record and strong UDR backing he can fight Giscard for the presidency in 1981.

In either case a promising scenario for him. And if, in the next months, the Barre plan is a crashing failure, then he can step into the breach sooner.

The Left too will keep a low profile, for much the same reasons as the UDR. Many of their leaders now see victory in 1978 as 'historically inevitable'—so long as they sit tight and avoid the kind of agitation that proved so counter-productive in 1968. They will urge the unions to avoid major strikes. And increasingly Communists and Socialists will avoid washing their very

filthy linen in public. Michel Rocard (a likely Socialist Finance Minister) has even said he hopes the Barre plan will succeed, economically, because he does not want to inherit a mess.

So Barre for a few months at least maY benefit from a kind of political truce, as well as from a wide feeling among the middle classes that the economic crisis dictates he be given a fair trial. But if in the longer term he fails, will it be because one day he too, like Chirac, falls foul of the whims of his chief? It is not unthinkable.

Today, Barre is undoubtedly fully loyal to Giscard—but no mere bottle-washer: he has his own strong views and took the job only on condition that he be his own finance minister. Yet the partnership does start at least with one major asset: Barre shares Giscard's ideology far more than Chirac did. He too is a keen European. able to add his own practical approach to Giscard's misty idealism: and both men accept that France's best gift to EuroPe now is to set tier own economy in order, f01' no further European integration is possible until, at least for a start, the Franc can again look the Mark in the face. Giscard now has a strong team around him, far more politically cohesive than before. He is said to be in a far more optimistic mood than four months agth during the storm with Chirac—but also

And there lies the danger. 'His pathetic dilemma', a friend of his told me, is that

he sincerely wants to make contact with the people, but is prisoner not only of hIs elitist background but of his temperament‘, his hatred of discussion, confrontation:

in a way, a very solitary figure, swinging. between optimism and dark pessimisro: with his feet not quite on the earth. ! cannot fail to win the next elections, possess the ultimate weapon and will use, it when the time comes', he told a file° enigmatically last week. The down-to-1 earth Barre may in the long run find 3.1 this hard to cope with, as Chirac Mu'