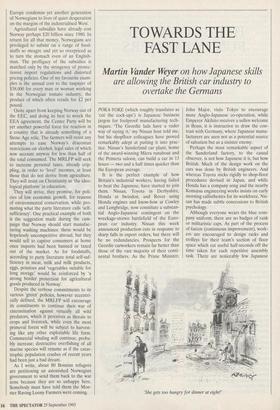 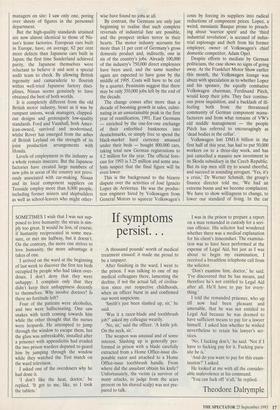 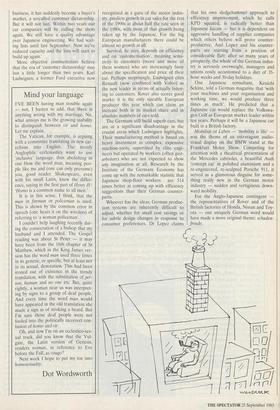 TOWARDS THE FAST LANE

are allowing the British car industry to overtake the Germans

POKA-YOKE (which roughly translates as 'cut the cock-ups') is Japanese business jargon for foolproof manufacturing tech- niques. 'The Geordie lads have a ruder way of saying it,' my Nissan host told me, but his shopfloor colleagues have proved remarkably adept at putting it into prac- tice. Nissan's Sunderland car plant, home of the award-winning Micra runabout and the Primera saloon, can build a car in 13 hours — two and a half times quicker than the European average.

It is the perfect example of how Britain's industrial workers, having failed to beat the Japanese, have started to join them. Nissan, Toyota in Derbyshire, Honda at Swindon, and Rover using Honda engines and know-how at Cowley and Longbridge, now constitute a substan- tial Anglo-Japanese contingent on the wreckage-strewn battlefield of the Euro- pean car industry. Nissan this week announced production cuts in response to sharp falls in export orders, but there will be no redundancies. Prospects for the Geordie carworkers remain far better than those of the vast majority of their conti- nental brothers. As the Prime Minister, John Major, visits Tokyo to encourage more Anglo-Japanese co-operation, while Emperor Akihito receives a sullen welcome in Bonn, it is instructive to draw the con- trast with Germany, where Japanese manu- facturers are seen not as a potential source of salvation but as a sinister enemy.

Perhaps the most remarkable aspect of the Sunderland factory, to the casual observer, is not how Japanese it is, but how British. Much of the design work on the cars was done by British engineers. And whereas Toyota sticks rigidly to shop-floor procedures devised in Japan, and while Honda has a company song and the nearby Komatsu engineering works insists on early morning callisthenics for its workforce, Nis- san has made subtle concessions to British psychology.

Although everyone wears the blue com- pany uniform, there are no badges of rank or militaristic caps. As part of the process of kaizen (continuous improvement), work- ers are encouraged to design racks and trolleys for their team's section of floor space which cut useful half-seconds off the time taken for each repetitive assembly task. There are noticeably few Japanese 'She gets too hungry for dinner at eight!' managers on site: I saw only one, poring over sheets of figures in the personnel department.

But the high-quality standards attained are now almost identical to those of Nis- san's home factories. European cars built in Europe, have, on average, 62 per cent more defects than Japanese cars built in Japan; the first time Sunderland achieved parity, the Japanese themselves were reluctant to believe it and sent a special audit team to check. By allowing British ingenuity and camaraderie to flourish within well-tried Japanese factory disci- plines, Nissan seems genuinely to have obtained the best of both worlds.

It is completely different from the old British motor industry, beset as it was by rampant unions, weak managers, clapped- out designs and grotesquely low-quality standards. Ford and Vauxhall, both Amer- ican-owned, survived and modernised, whilst Rover has emerged from the ashes of British Leyland on the strength of its joint production arrangements with Honda.

Levels of employment in the industry as a whole remain insecure. But the Japanese factories have created large numbers of new jobs in areas of the country not previ- ously associated with car-making. Nissan and its local component suppliers on Teesside employ more than 8,000 people, including former miners and shipbuilders as well as school-leavers who might other- wise have found no jobs at all.

By contrast, the Germans are only just beginning to realise that such complete reversals of industrial fate are possible, and the prospect strikes terror in their hearts. The motor industry accounts for more than 11 per cent of Germany's gross domestic product and, indirectly, one in six of the country's jobs. Already 100,000 of the industry's 750,000 direct employees have been axed, and the same number again are expected to have gone by the middle of 1995. Costs will have to be cut by a quarter. Pessimists suggest that there may be only 350,000 jobs left by the end of the decade.

The change comes after more than a decade of booming growth in sales, culmi- nating in an unsustainable peak in the first year of reunification, 1991. East Germans — enriched by the one-for-one exchange of their enfeebled banknotes into deutschmarks, or simply free to spend the black-market hard currency amassed under their beds — bought 800,000 cars, taking total new German registrations to 4.2 million for the year. The official fore- cast for 1993 is 3.25 million and some ana- lysts suspect that the final figure will be even lower.

This is the background to the bizarre dispute over the activities of Jose Ignacio Lopez de Arriortua. He was the produc- tion engineer hired by Volkswagen from General Motors to squeeze Volkswagen's costs by forcing its suppliers into radical reductions of component prices. Lopez, a weird, messianic Basque prone to preach- ing about 'warrior spirit' and the 'third industrial revolution', is accused of indus- trial espionage and theft from his former employer, owner of Volkswagen's chief domestic competitor, Adam Opel.

Despite efforts to mediate by German politicians, the case shows no signs of going away. At the Frankfurt Motor Show earlier this month, the Volkswagen lounge was abuzz with speculation as to whether Lopez and his sponsor, the equally combative Volkswagen chairman, Ferdinand Piech, would keep their jobs. They face continu- ous press inquisition, and a backlash of ill- feeling both from the threatened community of German component manu- facturers and from what remains of V'W's old middle management — the people Piech has referred to encouragingly as 'dead bodies in the cellar'.

Volkswagen lost DM1.6 billion in the first half of this year, has had to put 50,000 workers on to a three-day week, and has just cancelled a massive new investment in its Skoda subsidiary in the Czech Republic. But its top men still try to sound cheerful, and succeed in sounding arrogant. 'Yes, it's a crisis,' Dr Werner Schmidt, the group's finance director told me, 'We had an extreme boom and we become complacent. We have to show willingness to change, to lower our standard of living. In the car business, it has suddenly become a buyer's market, a so-called customer dictatorship. But it will not last. Within two years our car companies will be calling the shots again. We still have a quality advantage over Japanese engineering. We had wait- ing lists until last September. Now we've reduced capacity and the lists will start to build up again.'

M6re objective commentators believe that the era of `customer dictatorship' may last a little longer than two years. Karl Ludwigsen, a former Ford executive now recognised as a guru of the motor indus- try, predicts growth in car sales for the rest of the 1990s at about half the rate seen in the 1980s, with most of that growth being taken up by the Japanese. For the big European manufacturers there could be almost no growth at all.

Survival, he says, depends on efficiency and on `customerisation', meaning sensi- tivity to customers (more and more of them women) who are increasingly fussy about the specification and price of their car. Perhaps surprisingly, Ludwigsen cites Renault (now combined with Volvo) as the new leader in terms of actually listen- ing to customers. Rover also scores good marks: it is the only sizeable European producer this year which can claim an increase both in its market share and in absolute numbers of cars sold.

The Germans still build superb cars, but are at a significant disadvantage in the crucial areas which Ludwigsen •highlights. Their manufacturing method is based on heavy investment in complex, expensive machine-tools, supervised by elite engi- neers but operated by workers (often gast- arbeiters) who are not expected to show any imagination at all. Research by the Institute of the Germany Economy has come up with the remarkable statistic that Japanese shop-floor workers are 514 times better at coming up with efficiency suggestions than their German counter- parts.

Whoever has the ideas, German produc- tion systems are inherently difficult to adjust, whether for small cost savings or for subtle design changes in response to consumer preferences. Dr Lopez claims

that his own sledgehammer approach to efficiency improvement, which he calls KPD squared, is radically better than Japanese kaizen — but it is dependent on aggressive handling of supplier companies which others believe will prove counter- productive. And Lopez and his counter- parts are starting from a position of considerable flab: after so many years of prosperity, the whole of the German indus- try is seriously overweight, managers and unions cosily accustomed to a diet of 35- hour weeks and 30-day holidays.

One Japanese consultant, Kenichi Sekine, told a German magazine that 'with your machines and your organisation and working time, we would produce three times as much'. He predicted that a Japanese car would replace the Volkswa- gen Golf as European market leader within ten years. Perhaps it will be a Japanese car built in a British factory.

Mobilittit ist Leben — 'mobility is life' — was the theme of an extravagant audio- visual display on the BMW stand at the Frankfurt Motor Show. Competing for attention with a theatrical presentation of the Mercedes cabriolet, a beautiful Audi 'concept car' in polished aluminium and a re-engineered, re-sculpted Porsche 911, it served as a glamorous disguise for some- thing really new in the German motor industry — sudden and vertiginous down- ward mobility.

For the Anglo-Japanese contingent — the representatives of Rover and of the British factories of Honda, Nissan and Toy- ota — one uniquely German word would have made a more original theme: schaden- freude.