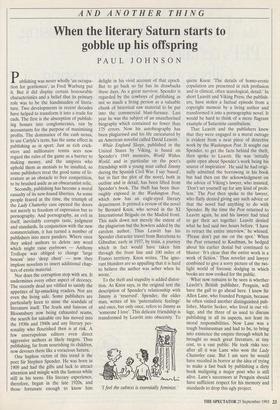 When the literary Saturn starts to gobble up his offspring

Publishing was never wholly 'an occupa- tion for gentlemen', as Fred Warburg put it. But it did display certain honourable characteristics and a belief that its primary role was to be the handmaiden of litera- ture. Two developments in recent decades have helped to transform it into a trade for cads. The first is the absorption of publish- ing houses into conglomerates, run by accountants for the purpose of maximising profits. The dominance of the cash nexus, to use Carlyle's term, has the same effect in publishing as in sport. Just as rich crick- eters and millionaire tennis aces now regard the rules of the game as a barrier to making money, and the umpires who uphold them as menials to be insulted, so some publishers treat the good name of lit- erature as an obstacle to free competition, to be brushed aside as an obscurantist relic.

Secondly, publishing has become a moral casualty of its new-found liberties. As some people feared at the time, the triumph of the Lady Chatterley case opened the doors not merely to freedom of expression but to pornography. And pornography, an evil in itself, inevitably corrupts taste, judgment and standards. In conjunction with the new commercialism, it has turned a number of publishers into mere panders. Where once they asked authors to delete any word which might raise eyebrows — Anthony Trollope was obliged to change 'large bosom' into 'deep chest' — now they implore novelists to insert additional chap- ters of erotic material.

Nor does the corruption stop with sex. It undermines every other aspect of decency. The recently dead are vilified to satisfy the appetites of lip-smacking readers. Nor are even the living safe. Some publishers are particularly keen to mine the scandals of literature itself. The feuds and liaisons of Bloomsbury now being exhausted seams, the search for saleable ore has moved into the 1930s and 1940s and any literary per- sonality who flourished then is at risk. A few unscrupulous editors even direct aggressive authors at likely targets. Thus publishing, far from nourishing its children, now devours them like a voracious Saturn.

One hapless victim of this trend is the poet Sir Stephen Spender. He was born in 1909 and had the gifts and luck to attract attention and mingle with the famous while still in his teens. His literary experience, therefore, began in the late 1920s, and those fortunate enough to know him delight in his vivid account of that epoch. But to go back so far has its drawbacks these days. As a great survivor, Spender is regarded by the cowboys of publishing as not so much a living person as a valuable chunk of historical raw material to be put into the commercial blast-furnace. Last year he was the subject of an unauthorised biography which contained no fewer than 175 errors. Now his autobiography has been plagiarised and his life caricatured by an American novelist called David Leavitt.

While England Sleeps, published in the United States by Viking, is based on Spender's 1949 memoirs, World Within World, and in particular on the poet's friendship with a young man called Jimmy during the Spanish Civil War. I say 'based', but in fact the plot of the novel, both in outline and in detail, has been lifted from Spender's book. The theft has been thor- oughly exposed in the Washington Post, which now has an eagle-eyed literary department. It printed a review of the novel by Bernard Knox, who served in the XI International Brigade on the Madrid front. This nails down not merely the extent of the plagiarism but the howlers added by the careless author. Thus Leavitt has his Spender character travel from Barcelona to Gibraltar, early in 1937, by train, a journey which in fact would have taken him through the front line and 100 miles of Franco territory. Knox writes, 'The igno- rant blunders are so appalling that it is hard to believe the author was sober when he wrote.'

To the theft and stupidity is added distor- tion. As Knox says, in the original text the description of Spender's relationship with Jimmy is 'reserved'. Spender, the older man, writes of his 'paternalistic feelings' and once, but only once, refers to Jimmy as 'someone I love'. This delicate friendship is transformed by Leavitt into obscenity. To 'I feel the subtext is essentially feminist.' quote Knox: The details of homo-erotic copulation are presented in rich profusion and in clinical, often scatological, detail.' In short Leavitt and Viking Press, the publish- ers, have stolen a factual episode from a copyright memoir by a living author and transformed it into a pornographic novel. It would be hard to think of a more flagrant example of Saturnine cannibalism.

That Leavitt and the publishers knew that they were engaged in a moral outrage is evident from a neat piece of detective work by the Washington Post. It sought out Spender, to get the facts behind the theft, then spoke to Leavitt. He was 'initially quite open about Spender's work being his source of inspiration'. He said he had origi- nally admitted the borrowing in his book but had then cut the acknowledgment on the advice of Viking's lawyer, who insisted, 'Don't set yourself up for any kind of prob- lem.' The Post then spoke to the lawyer, who flatly denied giving any such advice or that the novel had anything to do with Spender. By the time the Post returned to Leavitt again, he and his lawyer had tried to get their act together. Leavitt denied what he had said two hours before. 'I have to retract the entire interview,' he whined. 'Please don't put me on the spot.' When the Post returned to Kaufman, he hedged about his earlier denial but continued to bluster: 'It's clear that the entire work is a work of fiction.' Thus novelist and lawyer combined to give a sorry picture of the twi- light world of forensic dodging in which books are now cooked for the public.

What now remains to be seen is whether Leavitt's British publisher, Penguin, will have the gall to go ahead here. I knew Sir Allen Lane, who founded Penguin, because he often visited another distinguished pub- lisher, Martin Secker, who lived in our vil- lage, and the three of us used to discuss publishing in all its aspects, not least its moral responsibilities. Now Lane was a tough businessman and had to be, to bring into existence the empire through which he brought so much great literature, at tiny cost, to a vast public. He took risks too: after all it was Lane who won the Lady Chatterley case. But I am sure he would have recoiled in horror at the idea of trying to make a fast buck by publishing a dirty book maligning a major poet who is still alive. Lane's successors at Penguin should have sufficient respect for his memory and standards to drop this ugly project.