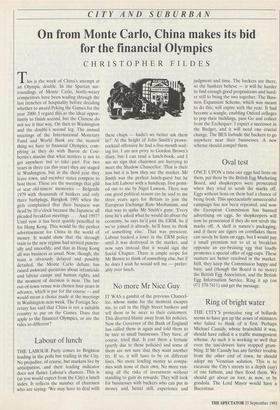 THE CITY'S protective ring of bollards seems to have got up the noses of ministers who failed to think of it first. Perhaps Michael Cassidy, whose brainchild it was, should have called it a traffic management scheme. As such it is working so well that even the taxi-drivers have stopped grum- bling. If Mr Cassidy has any further trouble from the other end of town, he should adopt my Venetian solution. This is to excavate the City's streets to a depth (say) of one fathom, and then flood them. We should get about on foot, as now, or by gondola. The Lord Mayor would have a Bucentaur.