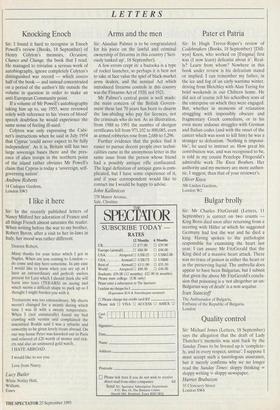 Sir: I found it hard to recognise in Enoch Powell's review (Books, 18 September) of Henry Colyton's memoirs, Occasion, Chance and Change, the book that I read. He managed to trivialise a serious work of autobiography, ignore completely Colyton's distinguished war record — which covers half of the book — and instead concentrated on a period of the author's life outside the volume in question in order to make an anti-European Community point.

If a volume of Mr Powell's autobiography taking him up to, say 1955, were reviewed solely with reference to his 'rivers of blood' speech doubtless he would experience the same sense of feeling ill-used.

Colyton was only expressing the Cabi- net's instructions when he said in July 1954 that Cyprus 'could never expect to be fully independent'. As it is, Britain still has two large sovereign bases there and the pres- ence of alien troops in the northern point of the island rather obviates Mr Powell's claim that Cyprus is today a 'sovereign, self- governing nation'.