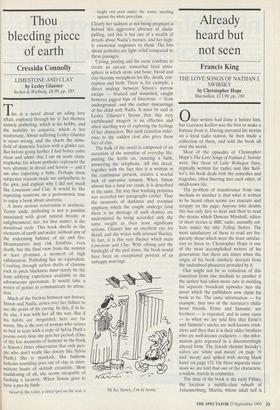 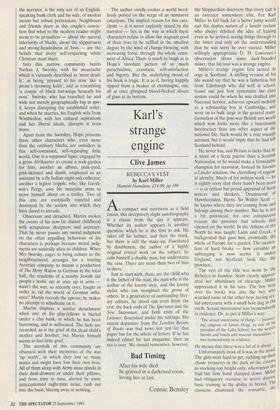 Already heard but not seen

THE LOVE SONGS OF NATHAN J. SWIRSKY by Christopher Hope Macmillan, £13.99, pp. 189 Other writers had done it before him, hut Garrison Keillor was the first to make a fortune from it. Having narrated his stories on a local radio station, he then made a collection of them, and sold the book all over the world.

Most of the episodes of Christopher Hope's The Love Songs of Nathan J. Swirsky were, like those of Lake Wobegon Days, orginally written for radio; and like Keil- lor's, his book deals with the comedies and tragedies, often blurring into each other, of small-town life.

The problem of transference from one medium to another is that what is written to be heard often seems too staccato and scrappy on the page. Anyone who doubts this has only first to hear and then to read the stories which Duncan Minshull, editor of short stories at BBC radio, annually col- lects under the title Telling Stories. The most satisfactory of these to read are fre- quently those which were the least satisfac- tory to listen to. Christopher Hope is one of the most accomplished writers of his generation; but there are times when the origin of his book similarly detracts from the undoubted pleasures provided by it.

One might not be so conscious of this transition from one medium to another if the author had taken more care in melding his separate broadcast episodes into the novel which the publishers now claim his book to be. The same information — for example, that two of the narrator's child- hood friends, Ernie and Sammie, are brothers — is repeated; and in some cases — as when we are told first that Ernie's and Sammie's uncles are well-known crick- eters and then that it is their older brothers who are well-known cricketers — the infor- mation gets repeated in a disconcertingly altered form. The Jewish chemist Swirsky's calves are 'white and meaty' on page 19 and 'meaty and spiked with strong black hairs' on page 152. On three separate, occa- sions we are told that one of the characters, a widow, travels in cosmetics.

The time of the book is the early Fifties, the location a middle-class suburb of Johannesburg. Martin, whose adult self is the narrator, is the only son of an English- speaking bank clerk and his wife, of modest means but robust pretensions. Neighbours and friends share in this couple's convic- tion that what to the modern reader might seem to be prejudices — about the natural inferiority of blacks, about the slipperiness and wrong-headedness of Jews — are the beliefs that every self-respecting white Christian must share.

Into this narrow community bursts Nathan J. Swirsky, with his moustache which is variously described as 'most dead- ly', as being 'pressed to his nose like a pirate's throwing knife', and as resembling 'a couple of black bat-wings beneath his nose'. Swirsky, who has travelled far and wide not merely geographically buit in spir- it, keeps disrupting the established order; and when he marries, his English wife from Wimbledon, with her cultural aspirations and her liberal ideals, disrupts it even more.

Apart from the Swirskys, Hope presents three other characters who, even more than the ordinary blacks, are outsiders in this self-contained, self-regarding little world. One is a supposed leper, engaged by a gross Afrikaaner to create a rock-garden for him; another an albino, pink-eyed, pink-skinned and dumb, employed as an assistant by a fly Indian night-soil collector; another a legless cripple, who, like Gersh- win's Porgy, uses his muscular arms to move himself about on a trolley. Two of this trio are eventually rejected and destroyed by the society into which they have dared to intrude.

Observant and detached, Martin evokes the events of his now far distant childhood with scrupulous sharpness and accuracy. That he never passes any moral judgment on the often appalling behaviour of his characters is perhaps because moral judg- ments are naturally alien to children. When Mrs Swirsky, eager to bring culture to the neighbourhood, arranges for a touring Austrian company to mount a production of The Meny Widow in German in the local hall, the residents of a nearby Jewish old people's home are at once up in arms — wasn't the war, so recently over, fought in order to rid the world of German influ- ence? Martin records the uproar; he makes no attempt to adjudicate on it.

Martin displays a similar detachment when one of his play-fellows is buried under a clay bank, in which he has been burrowing, and is suffocated. The facts are recorded, as is the grief of the dead child's mother and brother; but Martin himself seems to feel little grief.

The menfolk of this community are obsessed with their memories of the war 'up north', in which they lost so many mates and might have lost their own lives. All of them sleep with Army-issue pistols in their desk-drawers or under their pillows, and from time to time, alerted by some unaccustomed night-time noise, rush out into the bush, blazing away at nothing. The author vividly evokes a world heed- lessly poised on the verge of an imminent cataclysm. The implicit reason for this cata- clysm — it is never explicitly stated by the narrator — lies in the way in which these characters refuse to allow the stagnant pool of their lives to be ruffled in the smallest degree by the wind of change blowing, with increasing force, through the whole conti- nent of Africa. There is much to laugh at in Hope's mordant picture of so much parochialism, crassness, self-satisfaction and bigotry. But the underlying mood of his book is tragic. It is as if, having happily sipped from a beaker of champagne, one all at once glimpsed blood-flecked slivers of glass at its bottom.