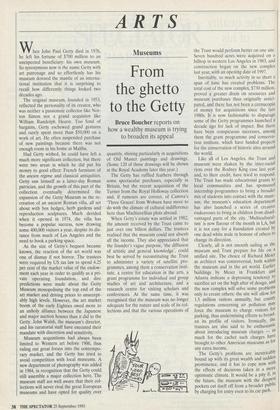 From the ghetto to the Getty

When John Paul Getty died in 1976, he left his fortune of $700 million to an unexpected beneficiary: his own museum. So synonymous now is the name Getty with art patronage and so effortlessly has his museum donned the mantle of an interna- tional institution that it is surprising to recall how differently things looked two decades ago.

The original museum, founded in 1953, reflected the personality of its creator, who was neither a passionate collector like Nor- ton Simon nor a grand acquisitor like William Randolph Hearst. Too fond of bargains, Getty eschewed grand gestures and rarely spent more than $50,000 on a work of art. He often suspended purchase of new paintings because there was not enough room in his home at Malibu.

Had Getty wished, he could have left a much more significant collection, but there were two areas in which he did put his money to good effect: French furniture of the ancien regime and classical antiquities. Getty saw himself as a latter-day Roman patrician, and the growth of this part of the collection eventually determined the expansion of the Getty Museum as the re- creation of an ancient Roman villa, all set about with box hedges, herb gardens and reproduction sculptures. Much derided when it opened in 1974, the villa has become a popular success, now drawing some 400,000 visitors a year, despite its dis- tance from much of Los Angeles and the need to book a parking space.

As the size of Getty's bequest became known, the reaction of the art world was one of dismay if not horror. The trustees were required by US tax law to spend 4.25 per cent of the market value of the endow- ment each year in order to qualify as a pri- vate operating foundation, and dire predictions were made about the Getty Museum monopolising the top end of the art market and driving prices to unaccept- ably high levels. However, the art market boom of the early Eighties owed more to an unholy alliance between the Japanese and major auction houses than it did to the Getty. John Walsh, the museum's director, and his curatorial staff have executed their mandate with discretion and sensitivity.

Museum acquisitions had always been limited to Western art before 1900, thus ruling out great forays into the contempo- rary market, and the Getty has tried to avoid competition with local museums. A new department of photography was added in 1984, in recognition that the Getty could still assemble a major collection here. The museum staff are well aware that their col- lections will never rival the great European museums and have opted for quality over quantity, shining particularly in acquisitions of Old Master paintings and drawings. (Some 120 of these drawings will be shown at the Royal Academy later this year.) The Getty has ruffled feathers through some spectacular purchases, especially in Britain, but the recent acquisition of the Turner from the Royal Holloway collection and, if rumours are correct, of Canova's 'Three Graces' from Woburn have more to do with the climate of cultural indifference here than Machiavellian plots abroad.

When Getty's estate was settled in 1982, the amount received by the Trust came to just over one billion dollars. The trustees realised that the museum could not absorb all the income. They also appreciated that the founder's vague purpose, 'the diffusion of artistic and general knowledge', could best be served by reconstituting the Trust to administer a variety of satellite pro- grammes, among them a conservation insti- tute, a centre for education in the arts, a grant programme for individual and group studies of art and architecture, and a research centre for visiting scholars and conferences. At the same time, it was recognised that the museum was no longer adequate for the nature and scale of its col- lections and that the various operations of

the Trust would perform better on one site. Seven hundred acres were acquired on a hilltop in western Los Angeles in 1983, and construction began on the new complex last year, with an opening date of 1997.

Inevitably, so much activity in so short a span of time has created problems. The total cost of the new complex, $730 million, proved a greater drain on resources and museum purchases than originally antici- pated, and there has not been a cornucopia of money for acquisitions since the late 1980s. It is now fashionable to disparage some of the Getty programmes launched a decade ago for lack of impact. But there have been conspicuous successes, among them the grant programme and conserva- tion institute, which have funded projects for the conservation of historic sites around the world.

Like all of Los Angeles, the Trust and museum were shaken by the inter-racial riots over the Rodney King case last year and, to their credit, have tried to respond. The Trust has made educational grants td local communities and has sponsored internship programmes to bring a broader mix of students into contact with the muse- um; the museum's education department has also launched a series of creative endeavours to bring in children from disad- vantaged parts of the city. 'Multicultural- ism' is now flavour of the month in LA, but it is not easy for a foundation created by one dead white male in honour of others to change its direction.

Clearly, all is not smooth sailing as the museum and Trust prepare for life on a unified site. The choice of Richard Meier as architect was controversial, both within the museum and in the art world. Earlier buildings by Meier in Frankfurt and Atlanta indicate a depressing tendency to sacrifice art on the high altar of design, and the new complex will solve some problems only to create others: the site will allow for 1.5 million visitors annually, but countY regulations concerning air pollution may force the museum to charge visitors for parking, thus undermining efforts to broad- en its profile of visitors. Ironically, the trustees are also said to be enthusiastic about introducing museum charges — as much for the cachet such charges have brought to other American museums as for any extra income. The Getty's problems are inextricablY bound up with its great wealth and sudden prominence, and it has to cope now with the effects of decisions taken in a more optimistic climate. It would be a pity if, in the future, the museum with the deepest pockets cut itself off from a broader public by charging for entry even to its car park.