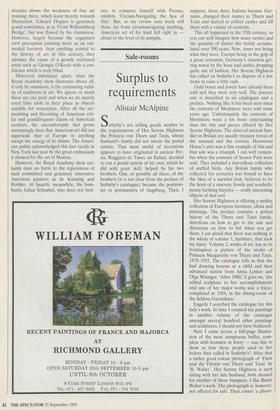 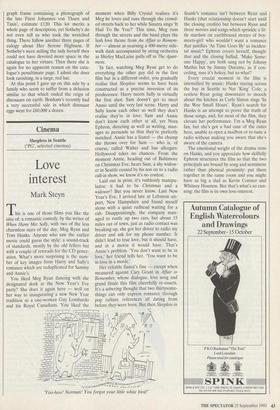 Sotheby's are selling goods surplus to the requirements of Her Serene Highness the Princess von Thurn und Taxis, whose husband's family did not invent the postal system. That most useful of inventions appears to have originated in ancient Per- sia. Ruggiero de Tasso, an Italian, decided to run a postal system of his own, which he did with great skill, helped by his two brothers. One, or possibly all three, of the brothers (it is not clear from the preface of Sotheby's catalogue) became the postmas- ter or postmasters of Augsburg. Then, I

suppose, these three Italians became Ger- mans, changed their names to Thurn und Taxis and started to collect castles and fill them with a variety of contents.

This all happened in the 15th century, so you can well imagine how many castles and the quantity of clutter this family accumu- lated over 500 years. Now, times not being what they were, Europe being in the grip of a great recession, Germany's situation get- ting worse by the hour and castles dropping quite out of fashion, Her Serene Highness has called on Sotheby's to dispose of a few items to raise a little cash.

Gold boxes and jewels have already been sold and they went very well. The present sale is described in six catalogues and a preface. Nothing like it has been seen since the contents of Mentmore were sold some years ago. Unfortunately the contents of Mentmore were a lot more entertaining than the bits and pieces offered by Her Serene Highness. The attics of ancient fam- ilies in Britain are usually treasure troves of the unusual and the curious. Harewood House's attic was a fine example of this and that sale was a triumph. I can well remem- ber when the contents of Stonor Park were sold. They included a marvellous collection of stuffed birds. Any British family who collected for centuries was bound to have the likes of a narwhal tusk, believed to be the horn of a unicorn; fossils and seashells; penny-farthing bicycles — really interesting objects of that sort.

Her Serene Highness is offering a motley collection of European furniture, china and paintings. The preface contains a potted history of the Thurn und Taxis family, directions on how to get to the sale and directions on how to bid when you get there. I am afraid that there was nothing in the whole of volume 1, furniture, that took my fancy. Volume 2, works of art, has as its frontispiece a picture of the studio of Princess Margarethe von Thurn und Taxis, 1870-1955. The catalogue tells us that she had drawing lessons as a child and then advanced tuition from Anna Lynker and Olga Wisinger. 'After 1900,' it goes on, 'she added sculpture to her accomplishments and one of her major works was a frieze, completed in 1910, in the dining-room of the Schloss Garatshaus.'

Eagerly I searched the catalogue for this lady's work. In time I counted ten paintings in another volume of the catalogue amongst several hundred other paintings and sculptures. I should not have bothered.

Next I came across a full-page illustra- tion of the most sumptuous buffet, com- plete with footmen in livery — was this to show us how these people used to live before they called in Sotheby's? After that a rather good colour photograph of 'Furst und die Fiirstin von Thurn und Taxis' by 'B. Weber'. Her Serene Highness is seen sitting with her late husband, both dressed for another of those banquets. I like Bruce Weber's work. The photograph is, however, not offered for sale. Then comes 'a photo- graph frame containing a photograph of the late Fiirst Johannes von Thurn und Taxis', estimate £120. This lot merits a whole page of description, yet Sotheby's do not even tell us who took the wretched thing. There follow another three pages of eulogy about Her Serene Highness. If Sotheby's were selling the lady herself they could not have devoted more space in the catalogue to her virtues. Then there she is again for no apparent reason on the cata- logue's penultimate page. I admit she does look ravishing, in a large, red hat.

At this point I gave up on this sale by a family who seem to suffer from a delusion similar to that which ended the reign of dinosaurs on earth. Bonham's recently had a very successful sale in which dinosaur eggs went for £60,000 a dozen.