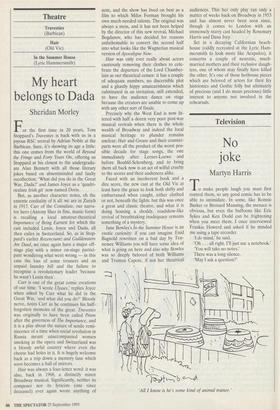 In the Summer House (Lyric Hammersmith)

My heart belongs to Dada

For the first time in 20 years, Tom Stoppard's Travesties is back with us in a joyous RSC revival by Adrian Noble at the Barbican. Sure, it's showing its age a little: this one comes from the world of Beyond the Fringe and Forty Years On, offering us Stoppard at his closest to the undergradu- ate Alan Bennett with all those literary jokes based on absentminded and faulty recollection: 'What did you do in the Great War, Dada?' and James Joyce as a 'quadri- oculate Irish git' now named Doris.

But, as another character notes, oh the entente cordiality of it all: we are in Zurich in 1917. Carr of the Consulate, our narra- tor hero (Antony Sher in fine, manic form) is recalling a local amateur-theatrical Importance of Being Earnest for which the cast included Lenin, Joyce and Dada, all then exiles in Switzerland. So, as in Stop- pard's earlier Rozencrantz and Guildenstern Are Dead, we once again have a major off- stage play with a minor on-stage partici- pant wondering what went wrong — in this case the loss of some trousers and an unpaid laundry bill and the failure to recognise a revolutionary leader 'because he wasn't Lenin then'.

Carr is one of the great comic creations of our time: 'I wrote Ulysses,' replies Joyce when asked by Carr what he did in the Great War, 'and what did you do?' Bloody nerve, notes Carr as he continues his half- forgotten memoirs of the great. Travesties was originally to have been called Prism after the governess of The Importance, and it is a play about the nature of senile remi- niscence of a time when social revolution in Russia meant unaccompanied women smoking at the opera and Switzerland was a bloody awful country where even the cheese had holes in it. It is hugely welcome back as a trip down a memory lane which soon becomes a hall of mirrors.

Hair was always a four-letter word: it was also, back in 1968, a distinctly minor Broadway musical. Significantly, neither its composer nor its lyricists (one since deceased) ever again wrote anything of note, and the show has lived on best as a film to which Milos Forman brought his own much-needed talents. The original was always a mess, and it has not been helped by the director of this new revival, Michael Bogdanov, who has decided for reasons unfathomable to convert the second half into what looks like the Wagnerian musical version of Apocalypse Now.

Hair was only ever really about actors cautiously removing their clothes to cele- brate the departure of the Lord Chamber- lain as our theatrical censor: it has a couple of adequate numbers, no discernible plot and a ghastly hippy amateurishness which culminated in an invitation, still extended, to have the audience dance on stage because the creators are unable to come up with any other sort of finale.

Precisely why the West End is now lit- tered with half a dozen very poor post-war musical revivals when there is the whole wealth of Broadway and indeed the local musical heritage to plunder remains unclear: Hair and Grease and their counter- parts were all the product of the worst pos- sible decade for stage songs, the one immediately after Lerner-Loewe and before Boublil-Schonberg, and to bring them all back now is an act of wilful cruelty to the scores and their audiences alike.

Faced with an incoherent book and a dire score, the new cast at the Old Vic at least have the grace to look both shifty and embarrassed when caught, either clothed or not, beneath the lights: but this was once a great and classic theatre, and what it is doing housing a shoddy, roadshow-like revival of breathtaking inadequacy remains something of a mystery.

Jane Bowles's In the Summer House is an exotic curiosity: if you can imagine Enid Bagnold rewritten on a bad day by Ten- nessee Williams you will have some idea of what is going on here and also why Bowles was so deeply beloved of both Williams and Truman Capote, if not her theatrical 'All I know is he's some kind of animal trainer.' audiences. This her only play ran only a matter of weeks back on Broadway in 1953 and has almost never been seen since, though it comes to London with an immensely starry cast headed by Rosemary Harris and Dana Ivey.

Set in a decaying Californian beach- house (oddly recreated at the Lyric Ham- mersmith to look more like Acapulco), it concerns a couple of neurotic, much- married mothers and their reclusive daugh- ters, one of whom may finally have killed the other. It's one of those hothouse pieces which are beloved of actors for their fey histrionics and Gothic folly but ultimately of precious (and I do mean precious) little interest to anyone not involved in the rehearsals.