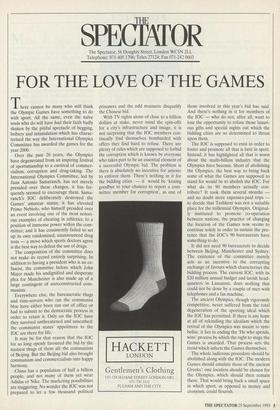 SPECT THE AT OR

FOR THE LOVE OF THE GAMES

with sport. All the same, even the naïve souls who do will have had their faith badly shaken by the pitiful spectacle of begging, bribery and intimidation which has charac- terised the way the International Olympics Committee has awarded the games for the year 2000. Over the past 20 years, the Olympics have degenerated from an inspiring festival of sportsmanship to a carnival of commer- cialism, corruption and drug-taking. The International Olympics Committee, led by Juan Antonio Samaranch, has not merely presided over these changes, it has fre- quently seemed to encourage them. Sama- ranch's IOC deliberately destroyed the Games' amateur status; it has elevated Primo Nebiolo, who himself presided over an event involving one of the most notori- ous examples of cheating in athletics, to a position of immense power within the com-

mittee; and it has consistently failed to set up its own randomised, unannounced drug tests — a move which sports doctors agree is the best way to defeat the use of drugs.

The composition of the committee does not make its record entirely surprising. In addition to having a president who is an ex- fascist, the committee before which John Major made his undignified and desperate plea for Manchester is also made up of a large contingent of unreconstructed com- munists.

Everywhere else, the bureaucratic thugs and time-servers who ran the communist bloc have either been run out of office or had to submit to the democratic process in order to retain it. Only on the IOC have they survived unthreatened and unscathed: the communist states' appointees to the IOC are there for life.

It may be for that reason that the IOC for so long openly favoured the bid by the nastiest thugs of them all: the communists of Beijing. But the Beijing bid also brought communism and commercialism into happy harmony. China has a population of half a billion people, and not many of them yet wear Adidas or Nike. The marketing possibilities are staggering. No wonder the IOC was not prepared to let a few thousand political prisoners and the odd massacre disqualify the Chinese bid.

With TV rights alone of close to a billion dollars at stake, never mind the spin-offs for a city's infrastructure and image, it is not surprising that the IOC members con- tinually find themselves bombarded with offers they find hard to refuse. There are plenty of rules which are supposed to forbid the corruption which is known by everyone who takes part to be an essential element of a successful Olympic bid. The problem is there is absolutely no incentive for anyone to enforce them. There's nothing in it for the bidding cities — it would be 'kissing goodbye to your chances to report a com- mittee member for corruption', as one of those involved in this year's bid has said. And there's nothing in it for members of the IOC — who do not, after all, want to lose the opportunity to refuse those luxuri- ous gifts and special nights out which the bidding cities are so determined to thrust upon them.

The IOC is supposed to exist in order to foster and promote all that is best in sport. Instead, it has highlighted all that is worst about the multi-billion industry that the Olympics have become. Short of abolishing the Olympics, the best way to bring back some of what the Games are supposed to stand for would be to abolish the IOC. For what do its 90 members actually con- tribute? It took them several months — and no doubt more expenses-paid trips — to decide that Tashkent was not a suitable place for the millennial Olympics. Original- ly instituted to promote co-operation between nations, the practice of changing the location of the Games now seems to continue solely in order to sustain the pre- tence that the IOC's 90 bureaucrats have something to do.

It did not need 90 bureaucrats to decide between Beijing, Manchester and Sydney. The existence of the committee merely acts as an incentive to the corrupting exchange of favours which characterises the bidding process. The current IOC, with its $20 million annual budget and lavish head- quarters in Lausanne, does nothing that could not be done by a couple of men with telephones and a fax machine.

The ancient Olympics, though vigorously competitive, never suffered from the total degeneration of the sporting ideal which the IOC has permitted. If there is any hope at all of rekindling the idealism which the revival of the Olympics was meant to sym- bolise, it lies in ending the 'He who spends, wins' process by which the right to stage the Games is awarded. That process sets the trend which infects the Games themselves.

The whole ludicrous procedure should be abolished along with the IOC. The modern Games should emulate those of the ancient Greeks': one location should be chosen for the Olympics, which should then remain there. That would bring back a small space in which sport, as opposed to money and cronyism, could flourish.