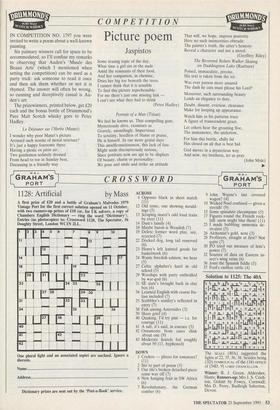 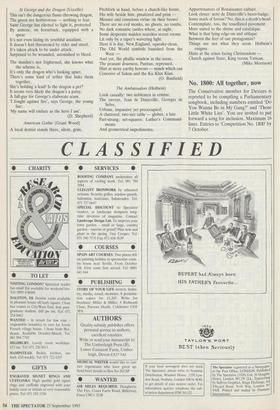 IN COMPETITION NO. 1797 you were invited to write a poem about a well-known painting.

Six palmary winners call for space to be accommodated, so I'll confine my remarks to observing that Auden's `Musee des Beaux Arts' (which I mentioned when setting the competition) can be used as a party trick: ask someone to read it once and then ask them whether or not it is rhymed. The answer will often be wrong, so cunning and deceptively casual is Au- den's art.

The prizewinners, printed below, get £20 each and the bonus bottle of Drummond's Pure Malt Scotch whisky goes to Peter Hadley.

Le Dejeuner sur l'Herbe (Manet) I wonder why poor Manet's picture Aroused such storms of moral stricture? It's just a happy foursome there Having a picnic en plein air, Two gentlemen sedately dressed From head to toe in Sunday best, Discussing in a friendly way

Some teasing topic of the day,

What time a girl sits in the nude Amid the remnants of their food, And her companion, in chemise, Dries her big toe beneath the trees.

I cannot think that it is sensible To find this picture reprehensible: For me there's just one missing link — I can't see what they had to drink (Peter Hadley) Portrait of a Man (Titian) We feel he knows us. That compelling gaze, Mysteriously alive, examines us Gravely, unsmilingly. Impervious To scrutiny, heedless of blame or praise, He is himself. In our more genial days This unselfconsciousness, this lack of fuss Might seem discourteously serious, Since portraits now are apt to be displays Of beauty, charm or personality: We pose and smile and strike an attitude That will, we hope, impress posterity.

Here no such insincerities obtrude: The painter's truth, the sitter's honesty Reveal a character and not a mood.

Was ever parson more assured The dash he cuts must please his Lord?

Moreover, such surrounding beauty Lends an elegance to duty.

Watch him as his patterns trace A figure of transcendent grace.

Let others hear the groaning floe, The immanence, the undertow, For him this brittle, chilly lid Has closed on all that is best hid.

God moves in a mysterious way. And now, my brethren, let us pray.

St George and the Dragon (Uccello) This isn't the dangerous flame-throwing dragon, The green are herbivorous — nothing to fear. Saint George has elected to fight it, protected By armour, on horseback, equipped with a

It's not even facing its youthful assailant, It doesn't feel threatened by rider and steed, It's taken aback to be under attack, Surprised to be wounded, astonished to bleed.

The maiden's not frightened, she knows what the scheme is, It's only the dragon who's looking upset.

There's some kind of tether that links them together, She's holding a lead! Is the dragon a pet?

It seems very likely the dragon's a patsy, A fall-guy for George's elaborate scam.

'I fought against fire', says George, the young liar; 'My name will endure as the hero I am'.

Pitchfork in hand, before a church-like house, His wife beside him, pinafored and prim — Menace and conscious virtue on their brows! There are no evil monks, no ghosts, no tombs, No dark romantic castles where, at night, Some desperate maiden searches secret rooms Lit only by a taper's wavering light.

Here it is day, New England, squeaky-clean, The Old World symbols banished from the West — And yet, the phallic window in the scene, The peasant dourness, Puritan, repressed, Hint at more earthy horrors — minds which can Conceive of Salem and the Ku Klux Klan.

Look closer: note de Dinteville's beret-badge. Some mark of favour? No, this is a death's-head. Contemplate, too, the tessellated pavement More suited to the shrine and catafalque. What is that lying edge-on and oblique Between the feet of our protagonists?

Things are not what they seem. Holbein's enigma Hints at the crises facing Christendom — Church against State, King versus Vatican.