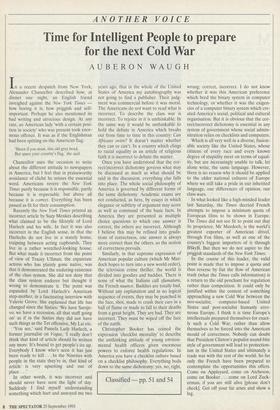 Time for Intelligent People to prepare for the next Cold War

In a recent despatch from New York, Alexander Chancellor described how, at dinner one night, an English friend inveighed against the New York Times — how boring it is, how priggish and self- important. Perhaps he also mentioned its bad writing and atrocious design. At any rate, an American lady 'with a certain posi- tion in society' who was present took enor- mous offence. It was as if the Englishman had been spitting on the American flag:

'Shoot if you must, this old grey head, But spare your country's flag,' she said.

Recently the New York Times printed an incorrect article by Suzy Menkes describing what claimed to be the lifestyle of Lord Harlech and his wife. In fact it was also incorrect in the English sense, in that the Harlechs do not live in a stately home, traipsing between acting cupboards. They live in a rather wretched-looking house. But what made it incorrect from the point of view of Tracey Ullman, the expatriate actress who has plainly gone native, was that it demonstrated the enduring existence of the class system. She did not deny that the class system endures but thought it wrong to demonstrate it. The point was expanded by Lord Harlech's American step-mother, in a fascinating interview with Valerie Grove. She explained that life has changed since the Sixties: 'We have Saraje- vo, we have a recession, all that stuff going on' as if in the Sixties they did not have such things as the Tet offensive, My Lai etc.

'You see,' said Pamela Lady Harlech, a former journalist on Vogue, 'I really don't think that kind of article should be written any more. It's bound to get people's ire up. Everybody I know who's seen it has just been ready to kill . . . In the Nineties with people in the state they're in, that kind of article is very upsetting and out of place . . .'

In other words, it was incorrect and should never have seen the light of day. Suddenly I find myself understanding something which hurt and annoyed me two

years ago, that in the whole of the United States of America my autobiography was not going to find a publisher. Their judg- ment was commercial before it was moral. The Americans do not want to read what is incorrect. To describe the class war is incorrect. To rejoice in it is unthinkable. In the same way it would be unthinkable to hold the debate in America which breaks out from time to time in this country: Can Africans swim? It doesn't matter whether they can or can't. In a country which clings to racial equality as an article of religious faith it is incorrect to debate the matter.

Once you have understood that the cor- rect/incorrect dichotomy governs what may be discussed as much as what should be said in the discussion, everything else falls into place. The whole social philosophy of America is governed by different forms of the same dichotomy. Academic exams are not conducted, as here, by essays in which elegance or subtlety of argument may score as well as command of the basic facts. In America they are presented as multiple choice questions to which one answer is correct, the others are incorrect. Although I believe this may be refined into grada- tions of correctness, one answer is always more correct than the others, so the notion of correctness prevails.

Similarly, in that supreme expression of American popular culture (which Mr Mur- doch hopes to turn into a new world order), the television crime thriller, the world is divided into goodies and baddies. There is none of what the Italians call sfumatura, the French nuance. Baddies are totally bad. Without any explanation and in no logical sequence of events, they may be punched in the face, shot, made to crash their cars in a ball of flame or made to fall to their deaths from a great height. They are bad. They are incorrect. They must be wiped off the face of the earth.

Christopher Booker has coined the expression 'checklist mentality' to describe the unthinking attitude of young environ- mental health officers given enormous powers to enforce health regulations. In America you have a checklist culture based on a checklist philosophy. Everything boils down to the same dichotomy: yes, no; right, wrong; correct, incorrect. I do not know whether it was this American preference which bred the binary system in computer technology, or whether it was the exigen- cies of a computer binary system which cre- ated America's social, political and cultural organisation. But it is obvious that the cor- rect/incorrect dichotomy is essential in any system of government whose social admin- istration relies on checklists and computers.

Which is all very well in a diverse, fission- able society like the United States, whose citizens of every race and every known degree of stupidity meet on terms of equal- ity, but are increasingly unable to talk, let alone write, the same language. However, there is no reason why it should be applied to the older national cultures of Europe where we still take a pride in our inherited language, our differences of opinion, our class wars.

In what looked like a high-minded leader last Saturday, the Times decried French attempts to impose a minimum quota of European films to be shown in Europe. The Times did not see fit to point out that its proprietor, Mr Murdoch, is the world's greatest exporter of American drivel, through Fox films, as well as one of the country's biggest importers of it through BSIcyB. But then we do not aspire to the priggish standards of the New York Times.

In the course of this leader, the valid point is made that to impose a quota and thus reverse by fiat the flow of American trash (what the Times calls information) is a return to the old penchant for regulation rather than competition. It could only be justified within the context of something approaching a new Cold War between the neo-socialist, computer-based United States and post-socialist humanly erro- neous Europe. I think it is time Europe's intellectuals prepared themselves for exact- ly such a Cold War, rather than allow themselves to be forced into the American mould of correctness. Nobody can doubt that President Clinton's populist sound-bite style of government will lead to protection- ism in the United States and ultimately a trade war with the rest of the world. So far only the French have been prepared to contemplate the opportunities this offers. Come on Appleyard, come on Atcheson, come on Booker. . . come on Lord Zuck- erman, if you are still alive [please don't check]. Get off your fat arses and show a leg.