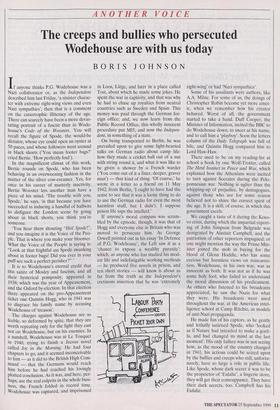 The creeps and bullies who persecuted Wodehouse are with us today

If anyone thinks P.G. Wodehouse was a Nazi collaborator or, as the Independent described him last Friday, 'a sinister charac- ter with extreme right-wing views and even Nazi sympathies', then that is a comment on the catastrophic illiteracy of the age. There can scarcely have been a more devas- tating portrait of a fascist than in Wode- house's Code of the Woosters. You will recall the figure of Spode, the would-he dictator, whose eye could open an oyster at 50 paces, and whose followers went around in black shorts (`You mean footer bags?' cried Bertie. 'How perfectly foul').

In the magnificent climax of this work, Bertie rounds on Spode, who has been behaving in an overweening fashion in the matter of the silver cow-creamer. Yes, for once in his career of masterly inactivity, Bertie Wooster lets another man have a piece of his mind. 'The trouble with you, Spode,' he says, 'is that because you have succeeded in inducing a handful of halfwits to disfigure the London scene by going about in black shorts, you think you're someone.

`You hear them shouting "Heil Spode!", and you imagine it is the Voice of the Peo- ple. That is where you make your bloomer. What the Voice of the People is saying is: "Look at that frightful ass Spode swanking about in footer bags! Did you ever in your puff see such a perfect perisher?" '

It is to Wodehouse's eternal credit that this satire of Mosley and fascism, and all their hysterical pomposity, appeared in 1938; which was the year of Appeasement, and the Oxford by-election. In that election there appeared on the pro-Appeasement ticket one Quintin Hogg, who in 1941 was to disgrace his family name by accusing Wodehouse of 'treason'.

The charges against Wodehouse are so feeble, so deformed by spite, that they are worth repeating only for the light they cast not on Wodehouse, but on his enemies. In a nutshell, Wodehouse was at Le Touquet 111 1940, trying to finish a Jeeves novel called Joy in the Morning. He had four chapters to go, and it seemed inconceivable to him — as it did to the British High Com- mand — that the Germans would reach him before he had reached his lovingly plotted conclusion. As it was, and here, per- haps, are the real culprits in the whole busi- ness, the French folded in record time. Wodehouse was captured, and imprisoned in Loos, Liege, and later in a place called Tost, about which he made some jokes. He spent the war in captivity, and that was why he had to chase up royalties from neutral countries such as Sweden and Spain. This money was paid through the German for- eign office; and, we now learn from the Public Record Office, this wholly innocent procedure put MI5, and now the Indepen- dent, in something of a state.

On being transported to Berlin, he was prevailed upon to give some light-hearted talks on German radio about camp life: how they made a cricket ball out of a nut with string round it, and what it was like to be given a shower by a French warder (You come out of it a finer, deeper, graver man') — that kind of thing. 'Of course,' he wrote in a letter to a friend on 11 May 1942, from Berlin, 'I ought to have had the sense to see that it was a loony thing to do to use the German radio for even the most harmless stuff, but I didn't. I suppose prison life saps the intellect.'

If anyone's moral compass was scram- bled by the episode, though, it was that of Hogg and everyone else in Britain who was moved to persecute him. As George Orwell pointed out in his essay 'In Defence of P.G. Wodehouse', the Left saw it as a `chance to expose a wealthy parasite'; which, as anyone who has studied his mod- est life and indefatigable working methods — he produced five novels in prison, and ten short stories — will know is about as far from the truth as the Independent's cretinous assertion that he was 'extremely

right-wing' or had 'Nazi sympathies'.

Some of his assailants were authors, like A.A. Milne. For some of us, the doings of Christopher Robin become yet more emet- ic, when we remember how his creator behaved. Worst of all, the government started to take a hand. Duff Cooper, the Minister of Information, incited the BBC to do Wodehouse down, to sneer at his name, and to call him a 'playboy'. Soon the letters column of the Daily Telegraph was full of bile, and Quintin Hogg compared him to Lord Haw-Haw.

There used to be on my reading-list at school a book by one Wolf-Trotter, called The Herd Instinct in Peace and War, which explained how the Athenians were incited to turn against Socrates during the Pelo- ponnesian war. Nothing is uglier than the whipping-up of prejudice, by demagogues, against those who are for some reason believed not to share the correct spirit of the age. It is a skill, of course, in which this government excels.

We caught a taste of it during the Koso- vo crisis, during which the impartial report- ing of John Simpson from Belgrade was denigrated by Alastair Campbell, and the patriotism of other reporters impugned; or one might mention the way the Prime Min- ister joined the mob in baying for the blood of Glenn Hoddle, who has some curious but harmless views on reincarna- tion. Wodehouse, in his own way, was as innocent as both. It was not as if he was some holy fool, who failed to understand the moral dimension of his predicament. As others who listened to his broadcasts appreciated, he saw the Nazis for what they were. His broadcasts were used throughout the war, at the American intel- ligence school at Camp Ritchie, as models of anti-Nazi propaganda.

He made fun of his captors, as he gently and lethally satirised Spode, who 'looked as if Nature had intended to make a goril- la, and had changed its mind at the last moment'. His only failure was in not seeing how, as the mood of the country changed in 1941, his actions could be seized upon by the bullies and creeps who still, unfortu- nately, have so large a role in public life. Like Spode, whose dark secret it was to be the proprietor of 'Eulalie', a lingerie store, they will get their comeuppance. They have their dark secrets, too. Campbell has his Eulalie.