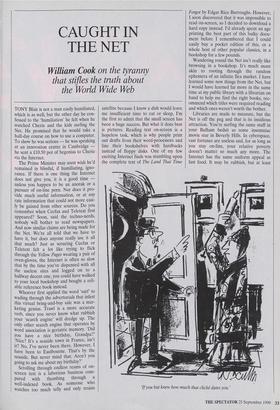 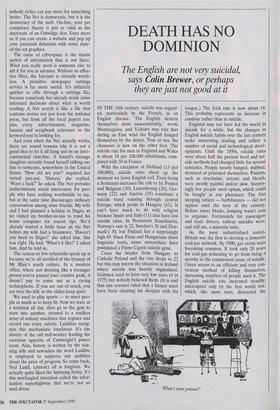 CAUGHT IN THE NET

William Cook on the tyranny

that stifles the truth about the World Wide Web

TONY Blair is not a man easily humiliated, which is as well, but the other day he con- fessed to the 'humiliation' he felt when he watched Cherie and the kids surfing the Net. He promised that he would take a half-day course on how to use a computer. To show he was serious — he was speaking at an innovation centre in Cambridge — he sent a £10.50 pot of begonias to Cherie via the Internet.

The Prime Minister may soon wish he'd remained in blissful, if humiliating, igno- rance. If there is one thing the Internet does not give you, it is a good time — unless you happen to be an anorak or a pursuer of on-line porn. Nor does it pro- vide much useful information, or at any rate information that could not more easi- ly be gained from other sources. Do you remember when Ceefax and Teletext first appeared? Soon, said the techno-nerds, nobody will bother to read newspapers. And now similar claims are being made for the Net. We're all told that we have to have it, but does anyone really use it all that much? Just as scouring Ceefax or Teletext felt a lot like trying to flick through the Yellow Pages wearing a pair of oven-gloves, the Internet is often so slow that by the time you've dispensed with all the useless sites and logged on to a halfway decent one, you could have walked to your local bookshop and bought a reli- able reference book instead.

Whoever first applied the word 'surf' to wading through the advertorials that infest this virtual bring-and-buy sale was a mar- keting genius. Trawl is a more accurate verb, since you never know what rubbish your 'search engine' will dredge up. The only other search engine that operates by word association is geriatric memory. Did you have a nice birthday, Grandpa?' `Nice? It's a seaside town in France, isn't it? No, I've never been there. However, I have been to Eastbourne. That's by the seaside. But never mind that. Aren't you going to ask me about my birthday?' Scrolling through endless reams of on- screen text is a laborious business com- pared with thumbing through a well-indexed book. As someone who watches too much telly and only resists satellite because I know a dish would leave me insufficient time to eat or sleep, I'm the first to admit that the small screen has been a huge success. But what it does best is pictures. Reading text on-screen is a hopeless task, which is why people print out drafts from their word-processors and line their bookshelves with hardbacks instead of floppy disks. One of my few exciting Internet finds was stumbling upon the complete text of The Land That Time Forgot by Edgar Rice Burroughs. However, I soon discovered that it was impossible to read on-screen, so I decided to download a hard copy instead. I'd already spent an age printing the best part of this bulky docu- ment before I remembered that I could easily buy a pocket edition of this, or a whole host of other popular classics, in a bookshop for a few pounds.

Wandering round the Net isn't really like browsing in a bookshop. It's much more akin to rooting through the random ephemera of an infinite flea market. I have learned some new things from the Net, but I would have learned far more in the same time at my public library with a librarian on hand to help me find the right books, rec- ommend which titles were required reading and which ones weren't worth the bother.

Libraries are made to measure, but the Net is off the peg and that is its insidious attraction. You're surfing the same stuff in your Balham bedsit as some insomniac movie star in Beverly Hills. In cyberspace, vast fortunes are useless and, for as long as you stay on-line, your relative poverty doesn't matter so much any more. The Internet has the same uniform appeal as fast food. It may be rubbish, but at least 'If you but knew how much that cliché dates you.' nobody richer can pay more for something better. The Net is democratic, but it is the democracy of the mob. On-line, your pet conspiracy theory is just as valid as the doctorate of an Oxbridge don. Even more so if you can create a website and pep up your paranoid delusions with some state- of-the-art graphics.

The curse of cyberspace is the titanic surfeit of information that is out there. What you really need is someone else to sift it for you in advance. Without an effec- tive filter, the Internet is virtually worth- less. A primitive newspaper cuttings service is far more useful. It's infinitely quicker to rifle through a cuttings file, because somebody has already made some informed decisions about what is worth reading. A Net search is like a file that contains stories not just from the national press, but from all the local papers too, plus every advertisement, magazine, fanzine and scrapbook reference to the keyword you're looking for.

And even when the Net actually works, there are sound reasons why it is not a good idea to let it all hang out on an inter- continental chat-line. A friend's teenage daughter recently found herself talking on- line to someone, somewhere in the United States. 'How old are you?' inquired her virtual pen-pal. 'Sixteen,' she replied. `Want a fuck?' he asked. The Net provides indiscriminate social intercourse for peo- ple who have nothing worthwhile to say, but at the same time discourages ordinary conversation among close friends. My wife and I had planned a holiday in Sitges, so we visited my brother-in-law to trawl his home computer for tourist tips. We'd already wasted a futile hour on the Net before my wife had a brainwave. 'Haven't you been to Sitges?' she asked him. She was right. He had. 'What's it like?' I asked him. And he told us.

The reason so few refuseniks speak up is because we're all terrified of the tyranny of Mr Blair's youth culture. In a modern office, where not dressing like a teenager proves you've passed your creative peak, it doesn't pay to come out as a raving technophobe. If you are out of touch, you are over the hill; so the oldies keep quiet.

We used to play sports — to meet peo- ple as much as to keep fit. Now we stare at a terminal all day, then go to the gym to stare into another, attuned to a soulless array of solitary machines that register and record our every calorie. Luddites recog- nise this mechanistic loneliness. It's the slavery of the old mill-worker feeding the ravenous appetite of Cartwright's power loom. Alas, history is written by the win- ning side and nowadays the word Luddite is employed to suppress any quibbles about the price of progress. So come back, Ned Ludd, (almost) all is forgiven. We actually quite liked the Spinning Jenny. It's this newfangled invention called the infor- mation superhighway that we're not so mad about.