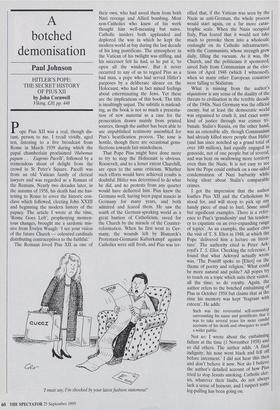 HITLER'S POPE: THE SECRET HISTORY OF PIUS XII by John Cornwell Viking, £20, pp. 448 Pope Pius XII was a real, though dis- tant, person to me. I recall vividly, aged ten, listening to a live broadcast from Rome in March 1939 during which the papal chamberlain proclaimed Ilabemus papam . . . Eugenio Pacelli', followed by a tremendous shout of delight from the crowd in St Peter's Square. Pacelli was from an old Vatican family of clerical lawyers and was regarded as a Roman of the Romans. Nearly two decades later, in the autumn of 1958, his death had me has- tening to Rome to cover the historic con- clave which followed, electing John XXIII and beginning the modern history of the papacy. The article I wrote at the time, `Rome Goes Left', prophesying momen- tous changes, brought me a sardonic mis- sive from Evelyn Waugh: 'I see your vision of the future Church — coloured cardinals distributing contraceptives to the faithful.'

The Romans loved Pius XII as one of their own, who had saved them from both Nazi revenge and Allied bombing. Most non-Catholics who knew of his work thought him well-meaning but naive. Catholic insiders both applauded and deplored the way in which he kept the modern world at bay during the last decade of his long pontificate. The atmosphere in the Vatican of his twilight was stifling, and his successor felt he had, as he put it, 'to open all the windows'. But it never occurred to any of us to regard Pius as a bad man, a pope who had served Hitler's purposes by a deliberate silence on the Holocaust, who had in fact mixed feelings about exterminating the Jews. Yet these are the implications of this book. The title is insultingly unjust. The subtitle is mislead- ing, as the book is not so much a presenta- tion of new material as a case for the prosecution drawn mainly from printed sources, though the author has been able to use unpublished testimony assembled for Pius's beatification process. The tone is hostile, though there are occasional genu- flections towards fair-mindedness.

That Pope Pius might have done more to try to stop the Holocaust is obvious. Roosevelt, and to a lesser extent Churchill, are open to the same criticism. Whether such efforts would have achieved results is doubtful. Hitler was determined to do what he did, and no protests from any quarter would have deflected him. Pius knew the Germans well, having been papal nuncio in Germany for many years, and both admired and feared them. He saw the south of the German-speaking world as a great bastion of Catholicism, saved for the Church by the miracle of the Counter- reformation. When he first went to Ger- many, the wounds left by Bismarck's Protestant-Germanic Kulturkampf against Catholics were still fresh, and Pius was ter- I must say, I'm shocked by your latest fashion statement!' rified that, if the Vatican was seen by the Nazis as anti-German, the whole process would start again, on a far more catas- trophic scale. When the Nazis occupied Italy, Pius feared that it would not take much to provoke them into a wholesale onslaught on its Catholic infrastructure, with the Communists, whose strength grew daily, filling the vacuum. As it was, the Church, and the politicians it sponsored, saved Italy from Communism at the elec- tions of April 1948 (which I witnessed), when so many other European countries were falling to Stalinism. What is missing from the author's requisitoire is any sense of the duality of the threats to civilisation in the terrible decade of the 1940s. Nazi Germany was the official enemy, but at least the democratic world was organised to crush it, and exact some kind of justice through war crimes tri- bunals. Stalin's Russia, on the other hand, was an ostensible ally, though Communism had already killed more people than Hitler (and has since notched up a grand total of over 100 million), had equally engaged in genocide, not of one people but of several, and was bent on swallowing more territory even than the Nazis. It is not easy to see how the Pope could embark on a one-sided condemnation of Nazi barbarity while being silent about Stalin's comparable crimes.

I got the impression that the author loathes Pius XII and the Catholicism he stood for, and will stoop to pick up any handy piece of mud to hurl. Seme small but significant examples. There is a refer- ence to Pius's 'grandiosity' and 'his tenden- cy to expatiate on an ever-expanding range of topics'. As an example, the author cites the visit of T. S. Eliot in 1948, at which the Pope 'delivered him a lecture on litera- ture'. The authority cited is Peter Ack- royd's 7'. S. Eliot. Checking the reference, I found that what Ackroyd actually wrote was, 'The Pontiff spoke to [Eliot] on the theme of poetry and religion.' What could be more natural and polite? All popes try to touch on a topic which suits their visitor, all the time; so do royalty. Again, the author refers to the botched embalming of Pius in October 1958 but claims that at the time his memory was kept 'fragrant with esteem'. He adds: Such was the reverential self-censorship surrounding his name and pontificate that it was to take several years for more candid accounts of his death and obsequies to reach a wider public.

Not so: I wrote about the embalming failure at the time (1 November 1958) and so did others. The author adds, ,A final indignity, his nose went black and fell of before interment.' I did not hear this then and don't believe it now. Nor do I believe the author's detailed account of how Pius tried to stop Jesuits smoking. Catholic cler- ics, whatever their faults, do not always lack a sense of humour, and I suspect some leg-pulling has been going on.