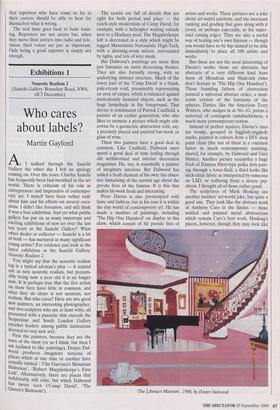 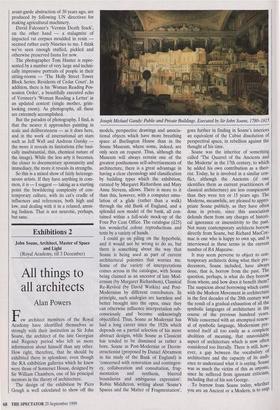 Who cares about labels?

As I walked through the Saatchi Gallery the other day I felt an apology coming on. Over the years, Charles Saatchi has frequently been bad-mouthed in the art world. There is criticism of his role as entrepreneur and impresario of contempo- rary art. I myself have been rather rude about him and his efforts on several occa- sions. I didn't like Sensation, and still think it was a bad exhibition. And yet what public gallery has put on as many important and exciting exhibitions of new art over the last ten years as the Saatchi Gallery? What other dealer or collector — Saatchi is a bit of both — has nurtured as many significant young artists? For evidence just look at the latest exhibition at the Saatchi Gallery, Neurotic Realism 2.

You might say that the neurotic realism tag is a typical ad-man's ploy — it started out as new neurotic realism, but presum- ably being now a year old it is no longer new. It is perhaps true that the five artists on show here have little in common, and what they do share is not neurosis, nor realism. But who cares? Here are two good new painters, an interesting photographer, and two sculptors who are at least witty, all presented with a panache that exceeds the Serpentine and South London Gallery (market leaders among public institutions devoted to very new art). First the painters, because they are the stars of the show (or so I think, but then I am inclined to like paintings). Dexter Dal- wood produces, imaginary versions of places which at one time or another have actually existed : `Che Guevara's Mountain Hideaway', 'Robert Mapplethorpe's First Loft'. Alternatively, there are places that indubitably still exist, but which Dalwood has never seen Kamp David', 'The Queen's Bedroom'). The results are full of details that are right for both period and place — the ranch-style modernism of Camp David, for example, with a helicopter waiting outside next to a Hockney pool. The Mapplethorpe loft is decorated in a style which might be tagged Masochistic-Narcissistic High-Tech, with a dressing-room mirror, surrounded by lights, and lots of wire mesh.

But Dalwood's paintings are more than Just fantasias on outré decorating themes. They are also formally strong, with an underlying abstract structure. Much of the lower part of the 'Camp David' is a blank, pale-cream void, presumably representing an area of carpet, which is balanced against meticulously itemised objects, such as the huge lampshade in the foreground. That device is reminiscent of Patrick Caulfield, a painter of an earlier generation, who also likes to animate a picture which might oth- erwise be a geometric abstraction with, say, a precisely placed and painted bar-stool, or glass of wine.

These two painters have a good deal in common. Like Caulfield, Dalwood must spend a good deal of time leafmg through old architectural and interior decoration magazines. He, too, is essentially a painter of imaginary interiors. But Dalwood has added a fresh element of his own: the obses- sive fantasising of the current age about the private lives of the famous. It is this that makes his work fresh and interesting.

Peter Davies is also preoccupied with fame and fashion, but in his case it is within the tiny world of contemporary art. He has made a number of paintings, including `The Hip One Hundred' on display in this show, which consist of hit parade lists of artists and works. These pictures are a joke about art-world celebrity, and the incessant ranking and grading that goes along with it (even, or perhaps especially, at the super- cool cutting edge). They are also a useful way of testing one's own hipness — though you would have to be hip indeed to be able immediately to place all 100 artists and works.

But these are not the most interesting of Davies's works: those are abstracts, but abstracts of a very different kind from those of Mondrian and Malevich (who don't feature in 'The Hip One Hundred'). Those founding fathers of abstraction painted a universal abstract order, a mod- ernist version of the harmony of the spheres. Davies, like the American Terry Winters, who nudges in at No. 62, paints a universal of contingent ramshackleness, a much more contemporary notion.

Instead of perfect squares, Davies's ones are wonky, grouped in higgledy-piggledy stacks, painted in colours from a DIY shop paint chart (the last of these is a common factor in much contemporary painting, shared, for example, by Dalwood and Gary Hume). Another picture resembles a huge flock of Damien Hirst-type polka dots pass- ing through a force-field, a third looks like deck-chair fabric as interpreted by someone on LSD, or suffering from a severe psy- chosis. I thought all of those rather good.

The sculptures of Mark Hosking are another insiders' art-world joke, but quite a good one. They look like the abstract work of Anthony Caro in the Sixties — those welded and painted metal abstractions which remain Caro's best work. Hosking's pieces, however, though they may look like The Liberace Museum, 1998, by Dexter Dalwood avant-garde abstraction of 30 years ago, are produced by following UN directives for making agricultural machinery.

David Falconer's 'Vermin Death Stack', on the other hand — a stalagmite of impacted rat corpses moulded in resin seemed rather early Nineties to me. I think we've seen enough stuffed, pickled and otherwise preserved fauna for now.

The photographer Tom Hunter is repre- sented by a number of very large and techni- cally impressive portraits of people in their sitting-rooms — 'The Holly Street Tower Block Series: Residents of Cedar Court'. In addition, there is his 'Woman Reading Pos- session Order', a beautifully executed echo of Verrneer's 'Woman Reading a Letter' in an updated context (single mother, grim- looking room). As photographs, all these are extremely accomplished.

But the paradox of photography, I find, is that the nearer it approaches painting in scale and deliberateness — as it does here, and in the work of international art stars such as Jeff Wall and Andreas Gursky the more it reveals its limitations (the basi- cally insubstantial, thin, chemical nature of the image). While the less arty it becomes, the closer to documentary spontaneity and immediacy, the more it reveals its strengths.

So this is a mixed show of fairly heteroge- neous artists. If they have anything in com- mon, it is — I suggest — taking as a starting point the bewildering complexity of con- temporary culture, with its cat's cradle of influences and references, both high and low, and dealing with it in a relaxed, amus- ing fashion. That is not neurotic, perhaps, but sane.