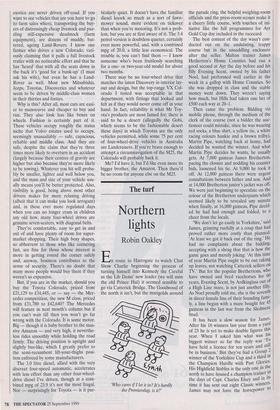 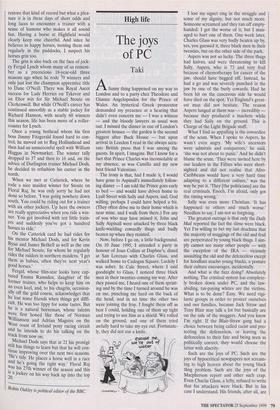 En route to Harrogate to watch Chat Show Charlie beginning the process of turning himself into Kennedy the Careful as the Lib Dems' new leader (we will miss the old Prince Hal) it seemed sensible to go via Catterick Bridge. The Goodwood of the north it isn't, but the marigolds around `Who cares if I let it in? It's hardly the Premiership, is it?' the parade ring, the helpful weighing-room officials and the press-room scones make it a cheery little course, with touches of ini- tiative like the full programmes for Ayr Gold Cup day included in the racecard.

The best contest of the day wasn't con- ducted out on the undulating, trappy course but in the unsaddling enclosure after the seller. Malton trainer James Hetherton's Home Counties had run a good second at Ayr the day before and his filly Evening Scent, owned by his father Noel, had performed well earlier in the week in a gallop with Home Counties. So she was dropped in class and the stable money went down. They weren't saying how much, but Hills had taken one bet of £500 each way at 20-1.

Then came the problem. Bidding via mobile phone, through the medium of the clerk of the course (not a bidder the auc- tioneer could mistake, since he was wearing red socks, a blue shirt, a yellow tie, a white racing colours hankie and a brown trilby), Martin Pipe, watching back at home, had decided he wanted the winner. And what Martin Pipe decides he wants, he usually gets. At 7,000 guineas James Bretherton, pacing the closure and nodding his counter bids, loosened his tie. At 9,000 he took it off. At 12,000 guineas there were urgent consultations between father and son. And at 14,000 Bretherton junior's jacket was off. We were just beginning to speculate on the colour of the Bretherton underpants which seemed likely to be revealed any minute when finally, at 16,000 guineas, Pipe decid- ed he had had enough and folded, to a cheer from the locals.

`We don't let go easily in Yorkshire,' said James, grinning ruefully at a coup that had proved rather more costly than planned. `At least we got it back out of the ring.' He had no complaints about the bidding, accepting with a shrug that that is how the game goes and merely joking: `At this time of year Martin Pipe ought to be out raking up leaves, not watching Catterick sellers on TV.' But for the popular Brethertons, who have owned and bred racehorses for 60 years, Evening Scent, by Ardkinglass out of a High Line mare, is not just another filly. As Noel proudly told me, she is the seventh in direct female line, of their founding fami- ly, a line begun with a mare bought for 45 guineas in the last war from the Sledmere Stud.

It has been a slow season for James. After his 18 winners last year from a yard of 23 he is yet to make double figures this year. When I asked him what was his biggest winner so far the reply was `To have held a licence for ten years and still be in business.' But they've had a Group2 i winner of the Yorkshire Cup and a third n the Champion Hurdle with Past Glories. His Highfield Stables is the only one in the north to have housed a champion trainer in the days of Capt. Charles Elsey and in its time it has sent out eight Classic winners. James may not have the horsepower to restore that kind of record but what a plea- sure it is in these days of short odds and long faces to encounter a trainer with a sense of humour who makes it all sound fun. Having a horse at Highfield would clearly keep one cheerful. And since he believes in happy horses, turning them out regularly in the paddocks, I suspect his horses grin too.

The grin is also back on the face of jock- ey Fergal Lynch whom many of us remem- ber as a precocious 18-year-old three seasons ago when he rode 70 winners and only just lost the champion apprentice title to Dane O'Neill. There was Royal Ascot success for Lady Herries on Tykevor and an Ebor win for Sir Michael Stoute on Clerkenwell. But while O'Neill's career has continued smoothly as a stable jockey for Richard Hannon, with nearly 60 winners this season, life has been more of a roller- coaster for Lynch.

Once a young hothead whom his first boss Jimmy Fitzgerald found hard to con- trol, he moved on to Reg Hollinshead and then had an unsuccessful spell with William Haggas in Newmarket. The winner tally dropped to 37 and then to 16 and, on the advice of Darlington trainer Michael Dods, he decided to refashion his career in the north.

When we met at Catterick, where he rode a nice maiden winner for Stoute on Floral Raj, he was only sorry he had not done so before. 'I was going nowhere down south. You could be riding out for a trainer with six other jockeys. Up here the owners are really appreciative when you ride a win- ner. You get involved with ten little train- ers and suddenly you've got a hundred horses to ride.'

On the Catterick card he had rides for his mentor Michael Dods, and for Kevin Ryan and James Bethell as well as the one for Michael Stoute, for whom he regularly rides the raiders in northern maidens. 'I get them as babies, often they're next year's good horses.'

Fergal, whose film-star looks have cap- tured Emma Ramsden, daughter of the former trainer, who helps to keep him on an even keel, and, to his chagrin, occasion- ally off the gold course, acknowledges that he lost some friends when things got diffi- cult. He was too lippy for some tastes. But he is a natural horseman, whose talents were first honed like those of Norman Williamson and Adrian Maguire on the West coast of Ireland pony racing circuit and he intends to do his talking on the track from now on.

Michael Dods says that at 21 his protegd still has things to learn but that he will con- tinue improving over the next two seasons. He s tidy. He places a horse well in a race and he's going the right way.' Floral Raj was his 27th winner of the season and this is a jockey on his way back up into the top 20.