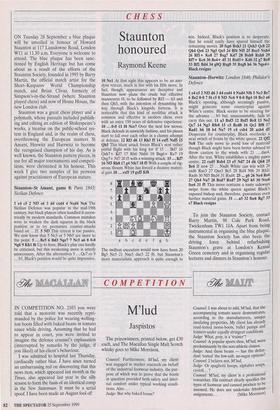 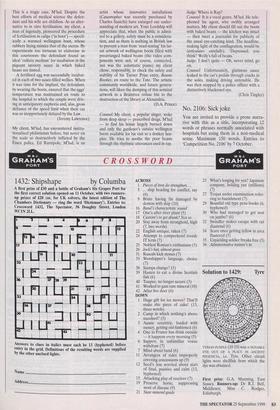 IN COMPETITION NO. 2103 you were told that a motorist was recently repri- manded by the police for wearing welling- ton boots filled with baked beans in tomato sauce while driving. Assuming that he had to appear in court, you were invited to imagine the defence counsel's explanation (interrupted by remarks by the judge, if you liked) of his client's behaviour.

I was admitted to hospital last Thursday, cardiacally rather blue. I have since turned an embarrassing red on discovering that this news item, which appeared last month in the Times, also appeared last year in the silly season to form the basis of an identical comp in the New Statesman. It must be a serial spoof. I have been made an August fool of! The prizewinners, printed below, get £30 each, and The Macallan Single Malt Scotch whisky goes to Mike Morrison.

Counsel: Furthermore, M'lud, my client was engaged in market research on behalf of the industrial footwear industry, the pur- pose of which was to prove that the boots in question provided both safety and inter- nal comfort under typical working condi- tions. Also....

Judge: But why baked beans? Counsel: I was about to add, M'lud, that the accompanying tomato sauce demonstrates, according to the manufacturers, unique insulating properties. My client has already road-tested moon-boots, ballet pumps and trainers under equally stringent conditions. Judge: What, pray, is a 'trainer'? Counsel: A popular sports shoe, M'lud, worn predominantly by the non-athletic classes. Judge: And these beans — has the defen- dant 'tested' the low-salt, no-sugar options? Counsel: I believe not, M'lud. Judge: Or spaghetti hoops, alphabet soups, ravioli... ?

Counsel: M'lud, my client is a professional researcher. His contract clearly specifies the types of footwear and canned produce to be assessed. He does not undertake frivolous

assignments.... (Mike Morrison) This is a tragic case, M'lud. Despite the best efforts of medical science the defen- dant and his wife are childless. As an alter- native to in vitro fertilisation, my client, a man of ingenuity, pioneered the procedure of fertilisation in caliga (in boot') — specif- ically a warmed wellington boot, whose rubbery lining mimics that of the uterus. By experiments too tortuous to elaborate in this courtroom the defendant found an ideal 'culture medium' for incubation in the piquant savoury sauce in which baked beans are tinned.

A fertilised egg was successfully incubat- ed in each of two sauce-filled wellies. When it was time for the implant, the defendant, by wearing the boots, ensured that the eggs' temperature was maintained en route to the hospital to which the couple were driv- ing in anticipatory euphoria and, alas, gross defiance of the speed limit when their car was so inopportunely delayed by the Law.

(Jeremy Lawrence) My client, M'Iud, has encountered institu- tionalised philistinism before, but never on the scale so destructively inflicted by the Essex police. Ed Rantipole, M'lud, is an artist whose innovative installations (Catastrophes was recently purchased by Charles Saatchi) have enlarged our under- standing of modern art. Your Lordship will appreciate that, when the public is admit- ted to a gallery, safety must be a considera- tion, and as there is nothing in British law to prevent a man from 'road-testing' his lat- est artwork of wellington boots filled with prearranged baked beans (the video com- ponents were not, of course, connected, nor was the automatic piano) my client chose, responsibly, to check the safety and stability of his Turner Prize entry, Beanie Booties, en route to the Tate. The artistic community worldwide, and future genera- tions, will liken the dumping of this seminal artwork in a Braintree refuse bin to the destruction of the library at Alexandria.

(D.A. Prince) Counsel: My client, a popular singer, woke from deep sleep — prescribed drugs, M'lud — to find his house largely burned down and only the gardener's outsize wellington boots available for his visit to a donkey hos- pice. He tries to soothe the poor beasts through the rhythmic utterances used in rap. Judge: Where is Rap?

Counsel: It is a vocal genre, Wind. He tele- phoned his agent, who swiftly arranged matters. My client should fill out the boots with baked beans — the kitchen was intact — then meet a journalist for publicity of the usual eye-catching kind. The headline, making light of the conflagration, would be (articulates carefully): 'Depressed, you think? Welly's full of beans.'

Counsel: Unfortunately, glutinous sauce leaked to the car's pedals through cracks in the soles, making driving untenable. He was then stopped by a police officer with a distinctively blackened eye.