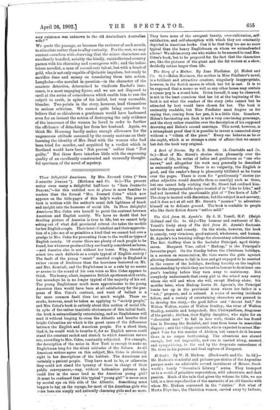 The Story of a Mother. By Jane Findlater. (J. Nisbet

and Co. 6s.)—Helen Hoseason, the mother in Miss Findlater's novel, is a brilliant and attractive creature, singularly inappropriate, however, in the Scotch manse in which her lot is cast. It is to be supposed that a manse as well as any other house may contain a square peg in a round hole. Helen herself, it may be observed, is not in the least conscious that her lot at the beginning of the book is not what the readers of the story (who cannot but be attracted by her) would have chosen for her. The book is eminently readable, but Miss Findlater must forgive us for saying that, coming from her pen, it is a little thin. Somehow, Helen's fascinating son Zack is not a very convincing personage, and the story rather stumbles over the description of his supposed drowning and Helen's second marriage. This novel, however, is a triumphant proof that it is possible to invent a connected story without a "villain of the piece." Every one behaves as he or she ought, which is so strange a state of affairs that we cannot but dub the book very original.