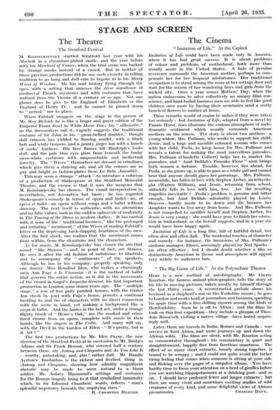 of colour and problems of motherhood, both more than

usually acute in the United States. A halo of peculiar reverence surrounds the American mother, perhaps to com- pensate her for her frequent misfortunes. Her traditional

occupation is to stand among the roses at her cottage door and wait for the return of her wandering boys and girls from the wicked city. Once a year comes Mothers' Day, when the nation endeavours to salve collectively an uneasy filial con- science, and hard-boiled business men are able to feel like good children once more by having their secretaries send a costly bunch of flowers to mother at home.

These remarks would of course be unfair if they were taken too seriously ; but Imitation of Life, adapted from a novel by Fannie Hurst; does illustrate the curious atmosphere of melo- dramatic sentiment which usually surrounds American mothers on the screen. The story is about two mothers—a young widow, Mrs. Pullman, who works to support- her child, Jessie, and. a large and amiable coloured woman who comes with her child, Peola, to keep house for Mrs. Pulhnan and reveals a talent for making the most marvellous pancakes. Mrs. Pullman (Claudette Colbert) helps her to market the pancakes, and " Aunt Delilah's Pancake Flour " soon- brings both women a fortune. Trouble, however, lies ahead, for Peola, as she grows up, is able to pass as a white girl and cannot bear that anyone should guess her parentage. Mrs. Pullman, meanwhile, has fallen in love with Stephen Archer, an icthyolo- gist (Warren William), and Jessie, returning from school, unluckily falls in love with him, too. Are the resulting tragedies inevitable ? Peola's problem is genuine and bitter enough, but Aunt Delilah—admirably played by Louise Beavers—hardly needs to lie down and die because her daughter wants to live away from home. And Mrs. Pullman is not compelled to sacrifice herself and Stephen Archer, for Jessie is very young ; she could have gone to finish her educa- tion in Switzerland, as she herself suggests, and in a year site would have been happy again.

Imitation of Life is a long film, full of faithful detail, but often slow and often dull. The incidental touches of character and comedy—for instance, the incursions of Mrs. Pullman's sardonic manager, Elmer, amusingly played by Ned Sparks— are often effective ; but I should doubt whether a film so distinctively American in theme and atmosphere will appeal very widely to audiences here. '

" The Big Game of Life." At the Polytechnic Theatre HERE is a new method of autobiography. Mr. Cherry Kearton, the famous animal photographer, tells the story of his life in moving pictures, taken mostly, by himself through the last thirty years. - A reconstructed prelude shows his boyhood as a shepherd's son on the Yorkshire moors ; he goes to London and works hard at journalism and business, spending his spare time with a five-shilling camera among the birds of Hertfordshire. Soon he is off to Africa ; and the films he took on this first expedition—they include a glimpse. of Theo- dore Roosevelt visiting a native village—have lasted surpris-

Later, there are travels in India, Borneo and Canada ; war service in East Africa, and more journeys up and down the African wilds. The films are silent, with Mr. Kearton acting as commentator throughout ; his commentary is quiet and straightforward, happily free from facetious smartness. The effect of so many short extracts, loosely strung together, is bound to be scrappy ; and I could not quite avoid the rather tiring feeling that comes when someone is sitting at your side and flicking over the pages of a snapshot album. You have hardly time to focus your attention on a herd of giraffes before you arc watching hippopotamuses at a drinking pool—and so

on. I should have preferred fewer and longer extracts ; but

there are many vivid and sometimes exciting studies of wild creatures of every ldnd, and sonic delightful views of African