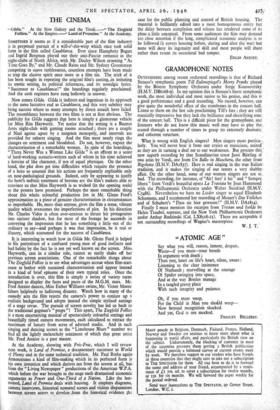 •• Gilda." At the New Gallery and the Tivoli.--" The Ziegfeld Follies." At the Empire.—" Land of Promise." At the Academy.

SOMETIMES it seems as if a considerable part of the film industry is in perpetual pursuit of a will-o'-the-wisp which once took solid form in the film called Casablanca. Ever since Humphrey Bogart and Ingrid Bergman played out their anti-Fascist romance in the night-clubs of North Africa, with Mr. Dooley Wilson crooning " As Time Goes By," and Mr. Claude Rains and Mr. Sydney Greenstreet competing in suave ruthlessness, countless attempts have been made to trap the elusive spirit once more in a film tin. The trick of it has been sought in repeating the original film's casting, in imitating its exotic setting, its political references, and its nostalgic lyrics. " Successor to Casablanca!" the hoardings regularly proclaimed. And the cash registers have rung hollowly in answer.

Now comes Gilda. Gilda is indirect and ingenious in its approach to the same lucrative end as Casablanca, and this very subtlety may bring success where so many attempts by direct assault have failed. The resemblance between the two films is not at first obvious. The publicity for Gilda suggests dip here is simply a glamorous vehicle for Miss Rita Hayworth. Yet notice that the setting is a Buenos Aires night-club with gaming rooms attached ; there are a couple of Nazi agents upset by a tungsten monopoly, and intervals are provided for cabaret singing. And the film most neatly rings the changes on sentiment and bloodshed. Do not, however, expect the characterisation of a remarkable woman. In spite of the hoardings, " There Never Was a Woman Like Gilda " is an affront to a score of hard-working scenario-writers each of whom in his time achieved a heroine of like character, if not of equal physique. On the other hand, the plot does get into difficulties which require the presence of a hero so unusual that his actions are frequently explicable only on near-pathological grounds. Indeed, only by appearing to justify the hero's sadistic treatment of heroine are the film's makers able to convince us that Miss Hayworth is as wicked (in the opening reels) as the posters have promised. Perhaps the most remarkable thing about this whole colourful production lies in Mr. Glenn Ford's approximation to a piece of genuine characterisation in circumstances so improbable. He, more than anyone, gives the film a tense, vibrant quality which overcomes the imperfections of. plot. In his direction Mr. Charles Vidor is often over-anxious to thrust his protagonists into sinister shadow, but for most of the footage he succeeds in conveying the impression that he has something a little out of the ordinary to say—and perhaps it was that impression, be it real or illusory, which accounted for the success of Casablanca.

It is interesting to watch how in Gilda Mr. Glenn Ford is helped in his portraiture of a confused young man of good instincts and bad habits by the fact he is not yet well known on the screen. Miss Hayworth, cast in a similar role, cannot so easily shake off her previous screen associations. One of the remarkable things about The Ziegfeld Follies is to see what advantages accrue when film-stars cease to bother with sustained characterisation and appear instead in a kind of brief epitome of their own typical. roles. Once the introduction is over, this film is simply a series of variety turns designed to display the faces and paces of the M.G.M. stars. Mr. Fred Astaire dances, Miss Esther Williams swims, Mr. Victor Moore falters helplessly to ludicrous disaster. Watch how in many of the comedy acts the film rejects the camera's power to conjure up a realistic background and adopts instead the simple stylised settings of a stage revue. The pursuit of screen novelty has led us back to the traditional gagman's " props "! This apart, The Ziegfeld Follies is a most entertaining musical of spectacularly colourful settings and beautifully timed camera movements, each calculated to extract the maximum of luxury from acres of adorned studio. And in such singing and dancing scenes as the " Limehouse Blues " number we find all the lightly melancholy sentiment of which that great artist Mr. Fred Astaire is a past master.

At the Academy, showing with Fric-Frac, which I will review next week, is Land of Promise, a documentary successor to World of Plenty and in the same technical tradition. Mr. Paul Rotha again- demonstrates a kind of film-making which in its perfected form is his own invention and which derives not from the screen at all, but fiom the "Living Newspaper " productions of the American W.P.A. which before the war brought to the stage such dramatised economic arguments as Power and One-Third of a Nation. Like the last- named, Land of Promise deals with housing. It employs diagrams, camera interviews, historical newsreel scenes and violent disputations between screen actors to develop from the historical evidence th:

case for the public planning and control of British housing. The material is brilliantly edited into a most homogeneous entity but the delay between completion and release has rendered some of its pleas a little untopical. From some audiences the film may demand too close attention if the long, complicated economic analysis is to be followed (it covers housing before, during and after the war) but none will deny its ingenuity and skill and most people will share rather than resent its occasional bad temper.