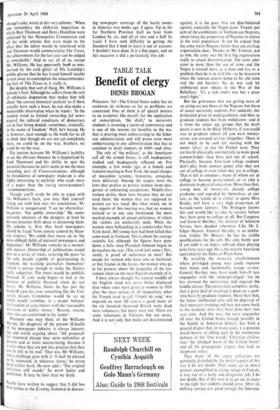 Princeton, NJ—The United States today has an embarras de richesses as far as problems are concerned. One of them- is of special interest to an academic like myself, for the application of conscription, 'the draft,' to university students is arousing a storm of controversy and is one of the reasons for hostility to the war that is proving most embarrassing to the John- son administration and will prove even more embarrassing to any administration that has to continue to draft students in 1969—and after.

The role of 'the military,' as the Americans call all the armed forces, is still inadequately studied and inadequately reflected on. For example, a few weeks ago, at a female and feminist meeting in New York, the usual charges of masculine tyranny, hypocrisy, arrogance were delivered. Among the targets were the laws that profess to protect women from dan- gerous or exhausting occupations. Middle-class women dislike these laws because they do not need them; the women they are supposed to protect are less vocal. But what struck me in the reports of this meeting was that no woman noticed or at any rate mentioned, the most marked example of sexual unfairness, of which the victims are exclusively male. While the women were bellyaching in a comfortable New York hotel, 501 young men had been killed that' same week in Vietnam. This is about the average casualty list, although the figures have gone down a little since President Johnson began to de-escalate the war. (The word isn't mine.) This, surely, is proof of unfairness to men? But except for women who have sons or husbands or boy friends in the forces, the women who go in for protests about the inequality of the law remain silent on the most flagrant example of it.

I •have always thought the natural muddle of the English mind was never better displayed than when votes were given to women in 1919 after the most serious of all inequalities, what the French used to call Tim* de sang,' was imposed on men. Of course a good many of the six hundred thousand British male dead were volunteers, but many were not. There are some volunteers in Vietnam, but not many. And it is not only that males are discriminated against; it is the poor that are discriminated against, especially the Negro poor. Twenty per cent of the combatants in Vietnam are Negroes, about twice the proportion of Negroes to whites in the total population. It can be argued that the army treats Negroes better than any civilian organisation does. Thanks to Mr Truman, not to PDR, the army was the first big organisation really to attack discrimination. The army edu- cates in more than the use of arms and the Negro is treated more as a man and less as a problem than he is in civil life—as he discovers when the veteran returns home to his old slum and the old barriers. So, as was said by embittered poor whites in the War of the Rebellion: 'it's a rich man's war but a poor man's fight.

But the grievances that are getting most of an airing are not those of the Negroes but those of senior university students. For suddenly, the protection given to undergraduates and then to graduate students has been withdrawn—and it is from the senior age groups that the draft quota is now to be filled. Hitherto, if you could stay in graduate school till you were twenty- seven, you escaped service altogether. There is not much to be said for starting with the senior 'class,' to use the French term. They are less fit physically and mentally to make good cannon-fodder than boys just out of school. Physically, because American college students don't play body contact games after they are out of college or even when they are in college. That is left to amateurs. many of whom are at college to become professionals or to take a doctorate in physical education. More than that, young men of twenty-six, already college graduates and regarded by themselves, at any rate, as the 'creme de la creme' to quote Miss Brodie, will have a very high proportion of barrack-room lawyers. The Pentagon knows this and would like to take its recruits before they have gone to college at all. But Congress and General Hershey, the director of Selective Service, have decided otherwise. Like Mr J. Edgar Hoover, General Hershey is an institu- tion. Unlike Mr Hoover. he has no visible qualifications for his job. His only battle scar (I am told) is an injury suffered when playing polo forty years ago. He is the nearest American equivalent to the Duke- of Plaza-Toro.

By assailing the monastic establishments where privileged young men could improve their minds and, incidentally, escape service, General Hershey may have made himself less unpopular with the 'underprivileged,' but he has alarmed the universities and angered the middle classes. The universities complain, justly, that a great deal of teaching is done on a part- time basis by graduate students. More than that, the future intellectual elite will be deprived of their necessary training and may not come back to the academy after they have done their two year stint. And this war, the most unpopular all over the United States (except possibly in the South) in American history, has bred a general disgust that, in many cases, is a genuine moral horror at taking part in the murderous defence of the 'free world,' Christian civilisa- tion,' the 'pledged word of the United States' and all the propaganda slogans that look so shopworn today.

That many of the angry collegians are genuinely disturbed by the moral aspects of this war I do not doubt. That some see in moral protest, exemplified in taking refuge in Canada, a way out of a nasty and dangerous job, I do not doubt. But if this war is to go on, it seems to me right that students should serve. After all, military service was good enough for Socrates.