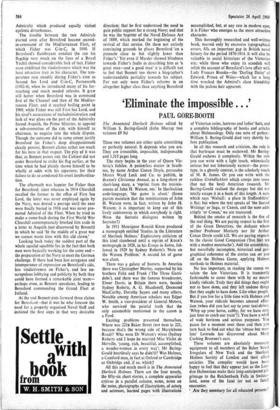 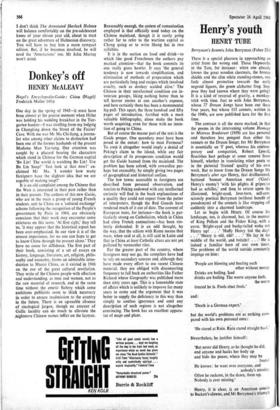 The Annotated Sherlock Holmes edited by William S. Baring-Gould (John Murray two volumes £9 9s) These two volumes are either quite astonishing or perfectly natural. It depends who you are. They are irresistible, impossible, indispensable and 1,515 pages long.

The story begins in the year of Queen Vic- toria's Jubilee. A patientless doctor in South- sea, by name Arthur Conan Doyle, persuades Messrs Ward Lock and Co. to publish, in Beeton's Christmas Annual, as a long-short or short-long story, a 'reprint from the reminis- cences of John H. Watson, MD.' In Sherlockian code-language, 'the game is afoot.' (Some purists maintain that the reminiscences of John H. Watson were, in fact, written by John H. Watson; it is important to keep out of this lively controversy in which everybody is right. Were the Socratic dialogues written by Socrates?) In 1911 Monsignor Ronald Knox produced a monograph entitled 'Studies in the Literature of Sherlock Holmes.' Exploratory criticism of this kind slumbered until a reprint of Knox's monograph in 1928, in his Essays in Satire, fol- lowed in 1929 by Sydney Roberts's 'Note on the Watson Problem.' A second lot of game was afoot.

There was a galaxy of hunters. In America there was Christopher Morley, supported by his brothers Felix and Frank ('The Three Garri- dohs), and there was the famous broadcaster, Elmer Davis; in Britain there were, besides Sydney Roberts, A. G. Macdonell, Desmond MacCarthy, Dorothy Sayers and many others. Notable among American scholars was Edgar W. Smith, a vice-president of General Motors, who survived the painful truth that the only automobile mentioned in the canon is a Ford. Exciting problems presented themselves. Where was 221s Baker Street (not next to 221, because that's the wrong side of Marylebone • Road)? Who were Dr Watson's wives (Sydney Roberts and I hope he married Miss Violet de Merville, 'young, rich, beautiful, accomplished, a wonder-woman in every way';. Mr Baring- Gould heartlessly says he didn't)? Was Holmes, a Camford man, in fact at Oxford or Cambridge or Oxbridge and, if so, whichZ All this and much more is in The Annotated Sherlock Holmes. There are the four novels, the fifty-six short stories, a complete apparaiiis criticus in a parallel column, notes, notes on the notes, photographs of illustrations, of actor? and actresses, learned pages with illustrations of Victorian coins, lanterns and ladies' hats, and a complete bibliography of books and articles about Holmesology. Only one note of pathos: William S. Baring-Gould died very shortly be- fore publication.

In all this research and criticism, the rule is that burlesque must be eschewed. Mr Baring- Gould eschews it completely. Within the rule you can write with a light touch, whimsically serious but not laboriously earnest—the proto- type, in a ghostly context, is the scholarly touch of M. R. James. Or you can write with the ruthless Griindlichkeit which creeps into some (but not the best) American research. Mr Baring-Gould realised the danger but did not totally escape it in a book of this length. A note which says 'Walsall: a place in Staffordshire' is flat; but where the text speaks of 'the Sacred Writings' or Saga, or Canon, and the note adds crisply 'or Conan,' we are reassured.

Behind the smoke of research is the fire of the real thing. We are paying respect to the first of the Great Detectives, the deducer whom neither Professor Moriarty nor Sir Arthur Conan Doyle could kill. We are paying respects to the classic Good Companion ('five feet ten with a modest moustache'). Arid the astonishing,. but mercifully incomplete, historical and geo- graphical coherence of the stories can set you off on the Holmes Game, applying Holmes methods to Holmes material. No less important, in reading the canon we salute the late Victorians. it is transiently fashionable to cover them with by no means kindly ridicule. Truly they did things they ought not to have done, and they left undone things that they ought to have done. Like other people.

But if you liVe for a little time with Holmes and Watson, your ridicule becomes amused affec- tion (when did you last say to your taxi-driver, 'Whip up your horse, cabby, for we have only just time to catch our train'?). You have a whiff of wide horizons and serious purposes. You pause for a moment over them and then you turn back to find out what the 'obtuse but reso- lute' Lestrade has discovered about Mary Cushing Browner's ears.

These volumes are absolutely necessary equipment to all members of the Baker Street Irregulars of New York and the Sherlock Holmes Society of London and their allied societies. The compiler would have been happy to feel that they appear just as the Lon- don Holmesians make their long-anticipated Pil- grimage to the Reichenbach Falls in Switzer- land, scene of the fatal (or not so fatal) encounter.

Are they necessary for all educated persons?

I don't think The Annotated Sherlock Holmes will balance comfortably on the pre-adolescent knees of your eleven year old, about to start on the great adventure of Holmesian discovery. You will have to buy him a more compact edition. But, if he becomes involved, he will need the 'Annotations' too. Mr John Murray won't mind.