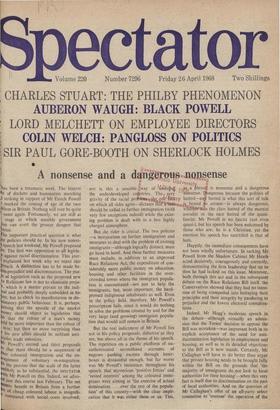 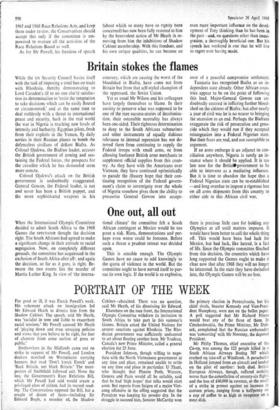 A nonsense and a cliff ki.xiosense has been a traumatic

week, The bizarre t of dockers and bummarees marching striking in support of Mr Enoch Powell marked the coming of age of the race blem in Britain. Nothing will ever be quite same again. Fortunately, we are still at stage at which sensible government on can avert the grosser dangers that aten. very few exceptions indeed) while the exist- ing problem is dealt with in a less highly charged atmosphere.

But the rider is crucial. The two policies —a moratorium on further immigration and measures to deal with the problem of existing immigrants—although logically distinct, must go hand in hand. And these further measures must include, in addition to an improved Race Relations Act, the expenditure of con- siderably more public money on education, housing and other facilities in the over-. crowded towns where the immigrant popula- tion is concentrated—not just to help the immigrants, but, most important, the hard- pressed indigenous inhabitants as well. Even in the policy field, therefore, Mr. Powell's prescription" fails, since it would do nothing to solve the problems created by and for the very large (and growing) immigrant popula- tion that would still remain in Britain. Happily, the immediate consequences have not been wholly unfortunate. In sacking Mr Powell from the Shadow Cabinet Mr Heath acted decisively, courageously and correctly. demonstrating the firm leadership that up to then he had lacked on this issue. Moreover. both through this act and in the subsequent debate on the Race Relations Bill itself, the Conservatives showed that they had no inten- tion of being stampeded into betraying their principles and their integrity by pandering to prejudice and the lowest electoral considera- tions., 1965 and 1968 Race Relations Acts, and keep them under review, the Conservatives should accept this only if the committee is em- powered to oversee all the activities of the Race Relations Board as well.

As for Mr Powell, his freedom of speech (about which so many have so rightly been concerned) has now been fully restored to him by the benevolent action of Mr Heath in re- moving from him the inhibitions of Shadow Cabinet membership. With this freedom, and his own unique qualities, he can become an even more important influence on the devel- opment of Tory thinking than he has been in the past—and, on questions other than immi- gration, a thoroughly beneficial one. But his speech last weekend is one that he will live to regret ever having made.