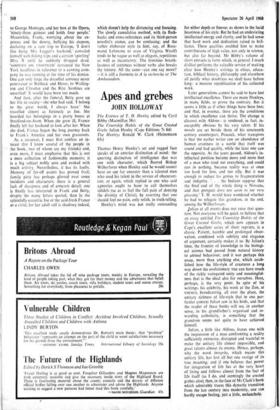 Thomas Henry Huxley's set and rugged face speaks of an anterior distinction of mind: the unerring distinction of intelligence that was one with character, which floored Bishop Wilberforce when Huxley said he would sooner have an ape for ancestor than a talented man who used his talent in the service of obscurant- ism; or again, which replied to one who said agnostics ought to have to call themselves infidels (so as to feel the full pain of denying the divinity of Christ), by asserting that one should feel no pain, only relish, in truth-telling.

Huxley's mind was not really outstanding

for either depth or finesse; as shows in the lucid heaviness of his style. But he had an undeviating

intellectual energy and clarity, and he had sense that hard work and dedication raised to bril- liance. These qualities enabled him to make contributions of high value, not only in science, but also far beyond. Mr Bibby's volume of short extracts (a form which, in general, I much dislike) performs the valuable service of making clear how Huxley's writings in ethics, educa- tion, biblical history, philosophy and elsewhere all justify what doubtless we shall have before long,: a massive republication of his collected work.

Later generations cannot be said to have lost intellectual excellence. There are many Huxleys, in many fields, to prove the contrary. But it seems a little as if other things 'have been lost; and that, in essence, these are the conditions in which excellence can thrive. The change is clearest_with Aldous: is rendered, in fact, in- escapably obvious by his very talent. If his novels are set beside those of his nineteenth century counterpart, Peacock, what transpires is that the earlier writer -saw an abundance of human craziness in a world that itself was' sound and had quality, while the later one saw the opposite. As the years passed, Aldous's in-

tellectual position became more and more that of a man who tried out everything, and could rest in nothing, because reality was at once too hard for him, and too silly. But it was enough to reduce his genius to fragmentation an4 indignity. '. . . the Indians suppose that the final -end of the whole thing is Nirvana, and that prospect does not seem to me very pleasing.' T. H. would have wondered whether he .had to relegate this grandson, in the end, among the Wilberforces.

Julian at all events does not raise that ques- tion. Not everyone will be quick to believe that an essay entitled The Courtship Habits of the Great Crested Grebe, which now appears in Cape's. ,excellent series of short reprints, is a classic. Patient, humble and prolonged obser- vation, combined with subtlety and elegance of argument, certainly makes it so. By Julian's time, the frontier of knowledge in the biologi- cal science had passed from natural history to animal behaviour; and it was perhaps this essay, more than anything else, which estab- lished how the life-style of creatures a long way down the evolutionary tree can have much of the richly variegated unity and meaningful- ness that is the ideal also for ourselves. Here, perhaps, is the very point. In spite of his writings, his celebrity, his work at the Zoo, at UNESCO, broadcasting, all over the place, the unitary richness of life-style that in one par- ticular context Julian saw in his birds, and that the reader of these books will see, in another sense, in his grandfather's organised and ye- warding catholicity, is something that the grandson seems not quite to have achieved himself.

Julian; a little like Aldous, leaves one with the impression of a man confronting a reality sufficiently extensive, disrupted and wasteful to make the unitary life almost impossible, and great talents almost its enemy. Hence, perhaps, why the word integrity, which means this unitary life, has lost all but one vestige of its true meaning; and if one believes that power for integration of life lies at the very heart of living and follows almost from the fact of life itself (as I do, and seemingly the crested grebes also), then, in the face of Mr Clark's book which admirably traces this dynastic transition from the last century into modernity, one can hardly escape feeling, just a little, melancholy.