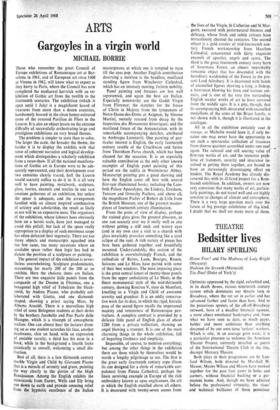 Gargoyles in a virgin world ARTS

Those who remember the great Council of Europe exhibitions of Romanesque art at Bar- celona in 1961, and of European art circa 1400 at Vienna in 1962, will know what to expect as they hurry to Paris, where the Council has now completed the mediaeval hat-trick with an ex- hibition of Gothic art from the twelfth to the fourteenth centuries. The exhibition (which is open until 1 July) is a magnificent hoard of treasures from more than a dozen countries, handsomely housed in the clean honey-coloured stone of the restored Pavillon de Flore in the Louvre. It is also an object lesson on the extreme difficulty of successfully orchestrating large and prestigious exhibitions on very broad themes.

The problem is simpler to state than to solve. The larger the scale, the broader the theme, the harder it is to display the exhibits with that sense of coherent narrative and logical develop- ment which distinguishes a scholarly exhibition from a raree-show. If all the national manifesta- tions of Gothic art in Europe were to be ade- quately represented, and their development over two centuries clearly traced, half the Louvre would scarcely suffice to do it in. It is all very well to have painting, metalwork, sculpture, glass, ivories, enamels and textiles in one vast omnium gatherum of an exhibition, but unless the space is adequate, and the arrangement handled with an almost inspired combination of artistry and scholarship, the result as likely as not will be an expensive mess. The organisers of the exhibition, whose labours have obviously been on a heroic scale, have just managed to avoid this pitfall; but lack of the space really appropriate to a display of such enormous scope has often defeated their ingenuity. There are too many objects and manuscripts squashed into too few cases, too many occasions where an available space • rather than logic has had to dictate the position of a sculpture or painting.

The general impact of the exhibition is never- theless overwhelming. Sculpture predominates, accounting for nearly 200 of the 500 or so exhibits. Here the choicest items are Italian. There are two exquisite little panels from the campanile of the Duomo in Florence, one a hexagonal high relief of Tubalcain the black- smith, by Andrea Pisano, who probably col- laborated with Giotto, and one diamond- shaped, showing a priest saying Mass, by Alberto Arnoldi. There is a marvellous high relief of some Bolognese students at their desks by the brothers Jacobello anchPier Paolo delle Masegne, which is a triumph of atmospheric realism. One can almost hear the lecturer dron- ing on as one student scratches his face, another daydreams, chin on hand, with an expression of amiable vacuity, a third has his nose in a book, while in the background a fourth looks quizzically at oneself, .welcoming a small dis- traction.

Best of all, there is a late thirteenth century marble Virgin and Child by Giovanni Pisano that is a miracle of serenity and grace, pointing the way clearly to the glories of the High Renaissance. Among the English exhibits the misericords from Exeter, Wells and Ely bring one down to earth and provide amusing relief from the hypnotic excellence of the Italian masterpieces, at which one is tempted to stare till the eyes pop. Another English contribution deserving a mention is the headless, mutilated standing figure from Winchester Cathedral, which has an intensely moving, forlorn nobility.

Panel painting and frescoes are less well represented, and again the best are Italian.

Especially noteworthy are the Gaddi Virgin from Florence; the sketches for the fresco of Christ in Majesty from the tympanum of Notre-Dame-des-Doms at Avignon, by Simone Martini, recently rescued from decay by the Inspection des Monuments historiques; and the mutilated fresco of the Annunciation, with its remarkable accompanying sketches, attributed to Ambrogio Lorenzetti. One painting of par- ticular interest is English, the early fourteenth century retable of the Crucifixion and Saints from Thornham Parva church, which has been cleaned for the occasion. It is an especially valuable contribution as the only other known examples of English panel painting of this period are the sedilia in Westminster Abbey. Manuscript painting gets a good showing and here the English come off best with several first-rate illuminated books, including the Lam- beth Palace Apocalypse, the Lindsey, Evesham, Tenison and Ormesby Psalters, and above all, the magnificent Psalter of Robert de Lisle from the British Museum, one of the greatest master- pieces of fourteenth century illumination.

From the point of view of display, perhaps the stained glass gives the greatest pleasure, as one can scarcely ever see it really well in situ withoUt getting a stiff neck and watery eyes (and in my own case a visit to a church with glass invariably provokes something like a total eclipse of the sun). A rich variety of pieces has here been gathered together and beautifully mounted. Understandably, this section of the exhibition is overwhelmingly French, and the cathedrals of Reims, Laon, Bourges, Rouen, Soissons and Le Mans have parted with some of their best windows. The most imposing piece is the great central lancet of twenty-three panels from the upper ambulatory of Le Mans, in the finest monumental style of the mid-thirteenth century, showing Routrou V, sieur de Montfort, kneeling to a Virgin and Child of awesome severity and grandeur. It is an oddly conserva- tive work for its date, in Which the rigid, hieratic pose of the seated figure recalls the impersonal majesty and remoteness of Romanesque por- traiture. A complete contrast is provided by a delicate little panel of English glass of about 1280 from a private -collection, showing an angel blowing a trumpet. It is one of the most charming things in the whole exhibition, full of beguiling freshness and simplicity.

Impossible, of course, to mention everything; but among the other things in the exhibition there are three which by themselves would be worth a lengthy pilgrimage to see. The first is the great early fourteenth century cope (from its size designed for a cleric of remarkable cor- pulence) from Pienza Cathedral, perhaps the finest surviving example in Europe of the rich embroidery known as opus anglicanum, the art at which the English excelled above all others. It is decorated with twenty-seven scenes from

the lives of the Virgin, St Catherine and St Mar- garet, executed with preternatural fineness and

delicacy, whose fresh and subtle colours have miraculously cheated the centuries. The second object is a gold crozier of mid-fourteenth cen- tury French workmanship from Haarlem Cathedral, ornamented with thirty exquisite enamels of apostles, angels and saints. The third is the great fourteenth century ivory horn of Savernake Forest, an almost improbably romantic object that has descended with the hereditary wardenship of the Forest to the pre- sent Lord Ailesbury. It is decorated with bands of enamelled figures showing a king, a bishop, a huntsman blowing his horn and various ani- mals, and is one of the very few oustanding English secular works of art to have survived from the middle ages. It is a pity, though, that its accompanying belt, decorated with enamelled medallions of the arms of the Bruce family, is not shown with it, though it is illustrated in the catalogue.

All in all the exhibition certainly vaut le voyage, as Michelin would have it, if only be- cause one may never have the opportunity to see such a spectacular collection of treasures from diverse quarters assembled under one roof again. The colossal and still soaring value of first-rate works of art, and the immense prob- lems of transport, security and insurance in- volved in getting them together, are bound to have an increasingly discouraging effect on lenders. The Royal Academy has already dis- covered this with its ill-fated project for a Rem- brandt exhibition. In addition, owners are now very conscious that many works of art, particu- larly paintings, do not travel well and are highly sensitive to changes of climate and atmosphere. There is a very large question mark over the future of big prestige exhibitions of thia kind. I doubt that we shall see many more of them.