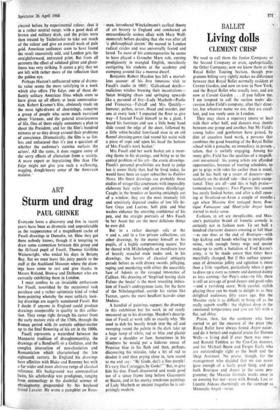 Everyone loves a discovery and few in recent years have been as dramatic and unpredictable as the reappearance of a magnificent cache of Fuseli drawings in Dunedin, NZ. How they got there nobody knows, though it is tempting to draw some connection between this group and the ill-fated pupil of Fuseli, Thomas Griffiths Wainewright, who ended his days in Botany Bay. But we must leave this juicy puzzle to the staff at the Auckland Museum where the draw- ings have come to rest and give thanks to Messrs Roland, Browse and Delbanco who are currently exhibiting them in London.

I must confess to an insatiable enthusiasm for Fuseli, nourished by the occasional rash purchase and a rather optimistic kind of tribal bone-pointing whereby the most unlikely look- ing drawings are eagerly nominated Fuseli. But I doubt if anyone in England could produce drawings comparable in quality to this collec- tion. They range right through his career from the early mature style of the 1760s, through the Roman period with its esoteric subject-matter up to the final flowering of his art in the 1800s.

Fuseli represents a watershed between the Mannerist tradition of draughtsmanship, the drawings of a Bandinelli or a Goltzius, and the complex interaction of neo-classicism and Romanticism which characterised ,,the late eighteenth century. In England his drawings have affinities with Blake and Romney but with a far wider and more abstruse range of classical reference. His background was cosmopolitan Swiss, his scholarship was prodigious, ranging from entomology to the doubtful science of Physiognomy propounded by his boyhood friend Lavater. He wrote a pamphlet on Rous-

seau, introduced Winckelmann's cyclical theory of art history to England and conducted an extraordinarily sexless affair with Mary Woll- stonecraft before deciding that she was after all 'a philosophical sloven.' He moved in London radical circles and was universally feared and loved. To most of his contemporaries he seems to have played a Groucho Marx role, cursing prodigiously in mangled English, mercilessly castigating his students at the academy and stumping around like a morose dwarf.

Benjamin Robert Haydon has left a marvel- lous accourr of his first timorous visit to Fuseli's studio in 1805: 'Galvanised devils— malicious witches brewing their incantations— Satan bridging chaos and springing upwards like a pyramid of fire—Lady Macbeth—Paolo and Francesca—Falstaff and Mrs Quickly— humour, pathos, terror, blood and murder, met one at every look! I expected the floor to give way—I fancied Fuseli himself to be a giant. I heard his footsteps and saw a little bony hand slide round the edge of the door, followed by a little white-headed lion-faced man in an old flannel dressing-gown tied round his waist with a piece of rope and upon his head the bottom of Mrs Fuseli's work basket.'

Fuseli's personal proclivities are hard to judge but it seems likely that, had he lived today, he would have been an eager subscriber to Rubber News. His finest drawings are probably those studies of virago-like courtesans with impossibly elaborate hair styles and extreme decolletage.

Caught in the boudoir or leaning enticingly out of a window, they are the most intensely felt

and sensitively depicted studies of low life be-

fore Guys and Lautrec. Soft pink and blue washes enhance the unerring confidence of his pen, and the straight portraits of Mrs Fuseli in her Ascot hat are the most delicious things he ever did.

But in a rather decrepit safe at the

✓ and A, and in a few private collections, are

other drawings, by the master himself or his pupils, of a highly compromising nature. Yet he shared with Michelangelo an inordinate love of heavily muscled male nudes and, in his drawings, the heroes of classical antiquity parade before us with drawn swords, pillaging, raping and murdering with either the unearthly face of Adonis or the ravaged innocence of Caliban. His drawing of 'Siegfried having slain Fafner the Snake' is the most revealing indica- tion of Fuseli's androgynous taste, for the hero of the Nibelungenlied, astride his victim like Tarzan, sports the most bouffant hair-do since Medusa.

A handful of paintings support the drawings in this exhibition but his work in oil rarely measured up to his drawings. Haydon's descrip- tion of Fuseli at work tells us exactly why. 'He used to dab his beastly brush into the oil and sweeping round the palette in the dark take up a huge lump of white, red or blue and plaster it over a shoulder or face. Sometimes in his blindness he would put a hideous smear of Prussian blue in his flesh and then, perhaps, discovering his mistake, take a bit of red to deaden it and then prying close in, turn round to me and say: "By Gode, dat's a fine purple!

It's vary like Correggio, by Gode!"' But, to give him his due, Fuseli discovered and made good use of a space frame long before Giacorrietti or Bacon, and in his murky tenebrous paintings of Lady Macbeth or ancient tragedies he is sur- prisingly modern.