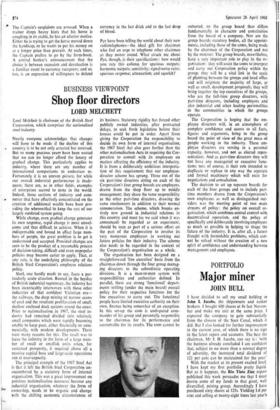 Lord Melchett is chairman of the British Steel Corporation, which comprises the nationalised steel industry.

Nearly everyone acknowledges that changes will have to be made if the decline of this • country is to be not only arrested but reversed. But so many precious -years have been wasted that we can no longer afford the luxury of • gradual change. This particularly applies to industry, where there are any number of international comparisons to embarrass us. Fortunately it is an uneven picture, for while our overall industrial performance is inade- quate, there are, as in other fields, examples of enterprises second to none in the world. Indeed, those sections of industry and com- merce that have effectively concentrated on the emotion of additional wealth have been pro- viding the wherewithal to keep the rest of our largely outdated system going.

While change, even gradual change generates its own response, rapid change is most unwel- come and thus difficult to achieve. When it is indispensable and bound to affect large num- bers of people, the great problem is to get it understood and accepted. Provided changes are seen to be the product of a reasonable process of decision-taking,, difficult and even unpopular policies may become easier to apply. That, at any rate, is the underlying philosophy of the British Steel Corporation's employee relations policy.

Steel, one hardly needs to say, faces a par- ticularly acute situation. Rooted in the heyday of British industrial supremacy, the industry has been inextricably interwoven with those other industries of that confident Victorian era— the railways, the deep mining of narrow seams of coal and the resultant proliferation of small, shallow enclosed dock systems round the coast. Prior to nationalisation in 1967, the steel in- dustry had remained divided into relatively small companies which were rapidly becoming unable to keep pace, either financially or com- mercially, with modern developments. There were many reasons for this. The result was to leave the industry in the form of a large num- ber of small or smallish units when, for sustained prosperity, it required above all a massive capital base and large-scale operations run at near-capacity.

The principal strength of the 1967 Steel Act is that it left the British Steel Corporation un- encumbered by a statutory form of internal organisation. This was a great improvement on previous nationalisation measures because any industrial organisation, whatever the form of ownership, needs to be organic and change with the shifting economic circumstances of its business. Statutory rigidity has forced other publicly owned industries, after protracted delays, to seek fresh legislation before their houses could be put in order. Apart from giving the Corporation the responsibility to decide its own form of internal organisation-, the 1967 Steel Act also goes further than the other nationalisatiots in requiring the Cor- poration to consult with its employees on matters affecting the efficiency of the industry. It is from a deliberately ambitious interpreta- tion of this requirement that our employee- director scheme has sprung. Three out of the six part-time directors sitting on each of the Corporation's four group boards are employees, drawn from the shop floor up to middle management; they share the same responsibility as the other part-time directors, drawing the same emoluments in addition to their normal remuneration. The scheme, which breaks en- tirely new ground in industrial relations in this country and must (as we said when it was announced) be regarded as an experiment, should be seen as part of a serious effort on the part of the Corporation to involve its very numerous employees in working out future policies for their industry. The scheme also needs to be regarded in the context of the Corporation's organisation as a whole.

The organisation has been designed on a straightforward 'line executive' basis from the chairman down through the four group manag- ing directors to the subordinate operating divisions. It is a man-to-man system with responsibilities and authorities defined. In parallel, there are strong 'functional' depart- ments settling (under the main board) overall policy for their respective functions for the line executives to carry out. The functional people have limited executive authority on their own, finance being somewhat of an exception. In this set-up the GMD is undisputed com- mander of his group and personally responsible to the chairman for its performance and accountable for its results. The GMD cannot be outvoted, so the group board thus differs fundamentally in character and constitution from the board of a company. Nor are the group boards statutory bodies, all the appoint- ments, including those of the GMDS, being made by the chairman of the Corporation and not by the minister. The group boards, nevertheless, have a very important role to play in the or- ganisation: they will assist the GMDS to interpret and carry out Corporation policy within the group; they will be a vital link in the cycle of planning between the groups and head office and will originate the majority of large, as well as small, development proposals; they will bring together the top executives of the groups, who are the full-time group directors, with part-time directors, including employees and also industrial and other leading personalities in the communities in which the groups. operate.

The Corporation is hoping that the em- ployee directors will, in an atmosphere of complete confidence and access to all facts, figures and arguments, bring to the group board the point of view of the- great mass of people working in the industry. These -em- ployee directors are serving in a personal capacity, however, and not- as elected repre- sentatives. And as part-time directors they will not have any managerial or executive func- tions; nor, of course, is their role intended to duplicate or replace in any way the separate and formal machinery which will exist for negotiations and consultation.

The decision to set up separate boards for each of the four groups and to include part- time members drawn from the Corporation's own employees as well as distinguished out- siders was the meeting point of two main streams of policy: the policy on overall• or- ganisation, which combines central control with decentralised operation, and the policy of specifically and deliberately involving employees as much as possible in helping to shape the future of the industry. It is, after all, a future fraught with formidable problems, which can- not be solved without the creation of a new spirit of confidence and understanding between management and employees.