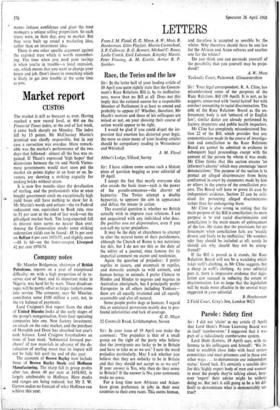 Sir: Your legal correspondent, R. A. Cline, has misunderstood some

of the purposes of the Race Relations Bill (19 April). It is not, as he suggests, concerned with 'racial hatred' but with conduct amounting to racial discrimination. The role of the Race Relations Board as the en- forcement body is not 'unheard of in English law'; similar duties are already performed by factory inspectors and public health inspectors.

Mr Cline has completely misunderstood Sec- tion 22 of the Bill, which provides that any communication made in the course of investiga- tion and conciliation to the Race Relations Board etc cannot be admitted in evidence in subsequent legal proceedings except with the consent of the person by whom it was made. Mr Cline thinks that this section creates 'an informer's charter' which may encourage 'secret denunciations.' The purpose of the section is to protect an alleged discriminator from being confronted in court by statements made by him or others in the course of the conciliation pro- cess. The Board will have to prove its case by independent evidence. Section 22 can be criti- cised for protecting alleged discriminators rather than for endangering them.

Mr Cline is also wrong in stating that the main purpose of the Bill is conciliation; its main purpose is to end racial discrimination and conciliation is the main means of enforcement of the law. He states that the provisions for ea- forcement when conciliation fails are 'weakly drawn and likely to be ineffective.' He wonders why they should be included at all; surely he should ask why should they not be streng- thened?

If the Bill is passed as it stands, the Race Relations Board will not be a watchdog which takes wolf's clothing, as Mr Cline suggests, but a sheep in wolf's clothing. As your editorial puts it, there is impressive evidence that legis- lation can succeed in reducing the extent of discrimination. Let us hope that the legislation will be made more effective in the several ways suggested in your editorial.