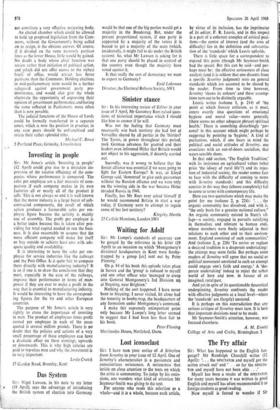 Sir: I have seen your notice of A Selection from Scrutiny in your issue of 12 April. One of Scrutiny's characteristics is a passionate and conscientious seriousness. A seriousness that insists on close attention to the texts on which the critic is commenting. To judge by his omis- sions, one wonders what kind of attention Mr Seymour-Smith was giving to his text.

For anyone who reads this selection as a whole—and it is a whole, because each article, by virtue of its inclusion, has the imprimatur of its editor, F. R. Leavis, and in this respect is a pant of a coherent complex of critical posi- tions—the centre of interest (and the area of difficulty) lies in the definition and substantia- tion of the 'standards' which Leavis upholds.

There is little space for a correspondent to expand this point (though Mr Seymour-Smith had the space). But this can be said—and per- haps must be : the effective seriousness of close analysis (and it is seldom that one dissents from a specific Scrutiny judgment) rests on general standards which are assumed to be shared by the reader. From time to time however, Scrutiny 'shows its colours' and these assump- tions turn out to be distinctly arguable.

Leavis writes (volume 1, p. 214) Of 'the point at which literary criticism, as it must, enters overtly into questions of emotional hygiene and moral value—more generally (there seems no other adequate phrase) spiritual health.' There is something disturbingly 'per- sonal' in this account which might perhaps be suggested by pointing to 'hygiene.' A kind of puritanism, which, if one bears in mind the political and social attitudes of Scrutiny, one associates with an out-of-doors socialism, that wears sensible shoes.

In that odd section, 'The English Tradition,' with its insistence on agricultural values (what price 'the idiocy of rural life'?) and its rejec- tion of industrial society, the reader comes face to face with the difficulty of coming to terms with Scrutiny standards : and this difficulty consists in the way they (almost completely) fail to come to terms with contemporary life.

Here are two quotations which may make the point for me (volume 2, p. 224): . the organic community has dissolved, and with it, "the only basis for a genuine national culture." An organic community existed in Sturt's vil- lage—a society, engaged in pursuits satisfying in themselves and relevant to human ends, whose members were finely adjusted in their relations to each other and to their environ- ment. England consisted of such communities' And (volume 2, p. 226) `To revive or replace a decayed tradition is a desperate undertaking: the attempt may seem futile. But perhaps some readers of Scrutiny will agree that no social or political movement unrelated to such an attempt could engage one's faith and energy.' A 'des- perate undertaking' indeed to reject the urban world of here and now, in favour of an imagined, rural past.

And yet in spite of its questionable theoretical underpinning, Scrutiny confronts the reader with effective judgments at a local level—where the 'standards' are (largely) unstated.

It is perhaps on this contradiction that any serious critique of Scrutiny must turn. It is here that important decisions need to be made.

A. M. Everitt College of Arts and Crafts, Birmingham 3