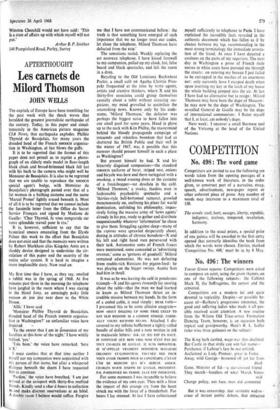 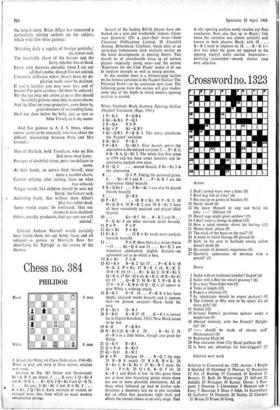 Trevor Grove reports: Competitors were asked to compose an octet, using the given rhymes, on one of the following subjects: the Cabinet Mark II, the Suffragettes, the censor and the censored.

Competitors are a modern lot and quite devoted to topicality. Despite—or possible be- cause of—Barbara's progressive eminence, the good and suffering ladies who made it all pos- sible received scant attention. A new routine from the Wilson Old Time-server Formation Dancing Team, however, is an occasion both topical and gossipworthy. Here's R. L. Sadler (who wins three guineas) on the subject :

The King hath castled, wage-war thus declined. But Castle in that strife can win fair name— Perchance, if Labour's fate be not unkind, Acclaimed as Lady Premier. great in Fame. Away, wild George—browned-off yet far from dead.

Gone, Minister of Ed.—a star-crossed friend. They march—heedless of what March Voter,.

But it was censorship. that veritable widow cruse of instant public debate, that attracted

the largest entry. Brian Allgar has concocted a particularly stirring anthem on the subject, which wins him three guineas : `Watching daily a regalia of foreign genitalia,' the censor said, `I'm invariably chary of the hirsute and the hairy, whether live or dead. Every view becomes cherubic when I cut out all that's pubic; though I'm not unkind, Cinematic titillation where there's been no de- pilation really must be declined. If you're hairless you may wear less, and of bosoms I'm quite careless—let them be unlaced!, But the eye may not arrive at parts that should be strictly private, since they're never chaste, And the films on your projectors, even those by great directors of resounding fame, Shall not show below the belly, just as sure as John Trevelyan is my name.

And five guineas to A. J. S. Innes, whose censor seems to be unusually sensitive about the difficult relationship between Porn and Mrs Grundy: Men of Harlech, bold Trevelyan, who on film find more than fame: Passages of doubtful virtue, pins too delicate to name. At their hands, an actress finds herself, once more a maiden chaste, Careful splicing, after cutting, laces up what was unlaced. `Vulgar words, like children should be seen not heard,' the Censor said, • Admitting freely, that without them Albee's play was rather dead. `Some would argue,' he continued, `that our standards have declined. Others, notably producers, find our cuts are still unkind.'

Unkind Andrew Marvell would certainly have found them, his age being 'loose and all unlaced'—a guinea to Morwyth Rees for identifying his 'Epitaph' as the source of the rhymes.